The iconic classic Jawa motorcycle brand was founded in Prague- the capital city of the now Czech Republic (earlier Czechoslovakia) in 1929 by Frantisek Janecek. The brand ‘Jawa’ name came into existence as a result of the amalgamation of the first two letters of Janecek and Wanderer. Wanderer was the motorcycle division purchased by Janecek. Jawa motorcycles used to be sold in India early 1960 under the Ideal Jawa brand. Later In 1973 the motorcycles were sold under the ‘Yezdi’ brand. Due to strict emission laws and competition from Japanese motorcycle companies the production of Jawa bikes eventually stopped in 1996 in India.

Internationally, the brand Jawa witnessed the formation of Jawa Moto in 1997, it was the company that succeeded the original Jawa globally. The company still sells motorcycles with 350cc 2-stroke engines primarily to Central American countries. The Jawa motorcycles have now started their second innings in India under Classic Legends Pvt. Limited. 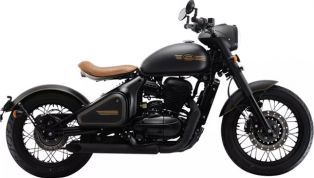 Tweet
Jawa Perak is an iconic model from the Jawa brand. In India company has resurrected the model in its gorgeous factory custom Bobber look. The Perak comes equipped with slightly bigger capacity 334cc engine. The liquid cooled motor produces 30 Bhp of power and 31 Nm of torque. In terms of design the Jawa Perak stands low slung with lower...
Compare See full specs » 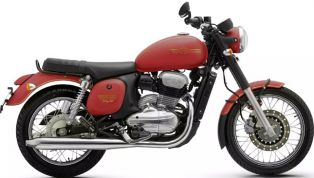 Tweet
Jawa Forty-Two is the entry level motorbike among the Jawa brand in India. The Jawa 42 retains its classic silhouette with robust design. The detachable headlight comes coupled with modern digital Odometer and Trip-meters. The bike comes with minimal Chrome onboard, however steel spoke wheels have been continued from the Standard Jawa. The Jawa 42 is powered by the same...
Compare See full specs » 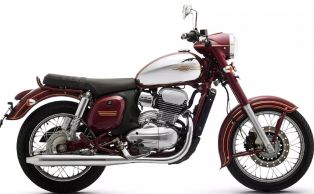