Before we begin let’s learn to pronounce “Husqvarna”, It is pronounced as “Hooskvarna”. Husqvarna is a Swedish company which used to make appliances and sewing machines in the 19th century. In 1903, they made their first motorised bicycle and have been in production since then. Their current range of motorcycles consists of two models the “Vitpilen” and “Svartpilen”. The Vitpilen has two variants on offer, a 410 and a 701 while the Svartpilen only has 401. Only a few days ago the 401 Vitpilen and Svartpilen were seen testing in India. So we can expect an announcement from the company real soon.

Husqvarna motorcycles are not a blend of retro styling and modern technology but an evolution of them. These bikes redefine the urban cruising and bring style elements which are worlds apart from every motorcycle on the market, in a good way. The main crowd which the company seeks to target include hipsters, tattoo artists and all those people who seek to express themselves through every medium. Husqvarna motorcycles will possibly launch at the end of this year, probably after setting up infrastructure and service centres. 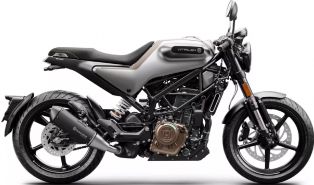 Tweet
Inspired by the bigger sibling Husqvarna 401, the Husqvarna Vitpilen 250 is equipped with 248.76cc engine. The same engine with identical state of tuning is also plonked on Husqvarna Svartpilen 250. The Cafe' racer inspired look of the bike is complimented with low slung ergonomics and clip-on handlebars. The radial tubeless tyres are more track oriented and have been slapped...
Compare See full specs » 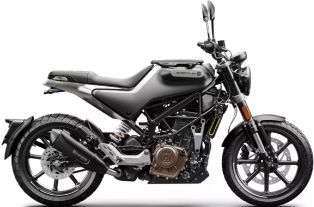 Tweet
Husqvarna Svartpilen 250 comes equipped with 248.76cc liquid cooled engine that produces 29.2 Bhp of power and 24 Nm of torque. The liquid cooled mill is mated to a 6-speed gear transmission system. The bike is featured with dual channel ABS and the Svartpilen tips the scale at 154Kg. The bike has dual purpose tubeless radial tyres, and to suite...
Compare See full specs » 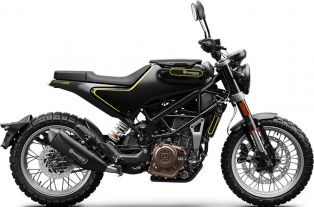 Tweet
The Husqvarna Svartpilen is the rebellious cousin of the Vitpilen and its name aptly means “Black Arrow”. It is rugged in all the places where its cousin is delicate. The headlight is caged and the tank is covered with a mounting plate for travel bags. The exhaust is covered with a heat shield and the handlebar is a straight one,...
Compare See full specs » 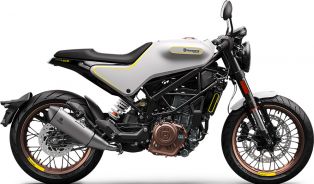 Tweet
The name Vitpilen means White Arrow and the bike certainly looks just as sleek. It adorns a barebone design with no side panels. It has small fenders, exposed frame and showcases naked styling. The Motorcycle is built and put together with utmost care and quality. The paint finish near the fuel lid on the tank is distinctive and justifies the...
Compare See full specs »
1-4 of 4