The iconic motorcycle brand "Yezdi" has been relaunched in India. The brand goes hand in hand with its rebellious and carefree image in the world of motorcycling. The brand Yezdi launched once again in India after its long discontinuation from the market. The classic motorcycles under the brand name are still remembered for their brute power delivery from the good old 2-stroke engines. The "Yezdi Roadking" was the favorite bike among the youngster in those days. The 2-stroke Roadking is still a sort after motorcycle among bike enthusiasts across the country.

It is recently the brand Yezdi did its comeback and launched its motorcycles equipped with 4-stroke technology adhering to the strict emission norms in India. There are three variants of Yezdi motorcycles that have been introduced to the Indian market catering to different tastes of motorcycle enthusiasts. These motorcycles are now being sold in the Indian market through their exclusive showrooms and slowly creating their own space among the biking fraternity in India. 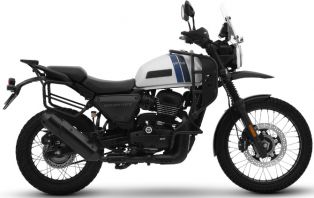 Tweet
The Yezdi Adventure is designed for all-terrain and it's an anywhere-to-go bike. The Yezdi Adventure comes featured with a Turn-by-turn navigation system onboard. The bike also provides multiple luggage options for long hauls. The front body comes protected by a steel rollover cage which extends from the fuel tank to the engine and goes all the way to the underneath...
Compare See full specs » 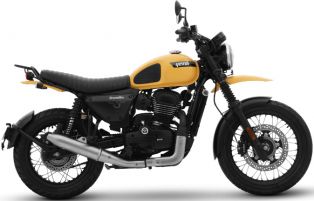 Tweet
The scrambler avatar of Yezdi motorcycle meets the standard of any other bike in this category. The engine casing is inspired by the good old "Roadking" model of yezdi. The bike comes with Twin channel ABS and it is equipped with the same 334cc liquid-cooled DOHC engine which is mated to a 6-speed transmission gearbox.
Compare See full specs » 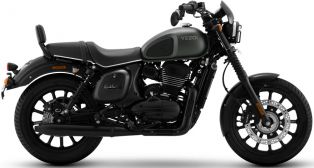 Tweet
The Yezdi Roadster comes in the silhouette of a typical road-dominating bike. The classic charm of the bike remains intact through the engine design, exhaust pipes, fenders, and the side body cover. The bike comes with 334cc single-cylinder, liquid-cooled engine churning out 29.7 Ps of power and 29.0 Nm of torque output.
Compare See full specs »
1-3 of 3