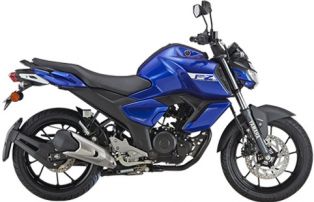 Tweet
Specs Compare Reviews
The new Yamaha FZ-V3.0 has taken design cues from its elder sibling FZ25 and now comes with bulkier fuel tank along with heavier air scoops on the tank. Adding to the revised design the bike is now featured with smaller LED headlight similar to the FZ25. As a compulsion the new Yamaha FZ V 3.0 is equipped with ABS (Single Channel). The twin seat setup at the previous model is been replaced by the single seat.

The FZ brand has always brought good fortunes for Yamaha across the world, it did the same for Yamaha India. In India the FZ series has brought forward great traction for the Japanese automaker ever since it launched the first version of the bike in early 2009. Time to time Yamaha India had come up with upgraded models from the same series. Yamaha has now introduced the third version of the FZ and FZ-S bikes.