Here we are with a new series of articles to explicate the Motorcycle Manufacturers in India. In this series, you get to know about the companies right from conception to present day. We lay the first stone today, with an Indigenous Indian manufacturer- Bajaj Auto Limited.

Bajaj Auto was founded in 1926 by Jamnalal Bajaj, during India's crusade for independence from the British. It was started off as a company selling imported two and three wheelers. Later in 1959 after India's independence, BAL (Bajaj Auto Limited) got the license to manufacture two and three wheelers in India. Bajaj started off making scooters in the early 1960's under the license of the Italian manufacturer Piaggio, with Three wheelers also being made side by side. Soon, in a matter of 10 years Bajaj started production of their indigenous scooters. In the year 1986, Bajaj rearranged it's priorities with the introduction of motorbikes. Bajaj Auto Limited is currently presided by Rajiv Bajaj.

What follows below will be the briefing of happenings at BAL, and it's various success stories.

Key Bajaj Brands from the past:

Starting off as a scooter manufacturer, BAL launched their very first scooter Bajaj Chetak in 1972. Chetak went on to become a legend amongst millions of Indian families, getting a lovely tag line "Hamara Bajaj" (Our Bajaj). This followed by many other scooter brands that had become household name in those days, Bajaj Super and the 100cc with 3-speed gear Bajaj Cub were among those very famous scooters. 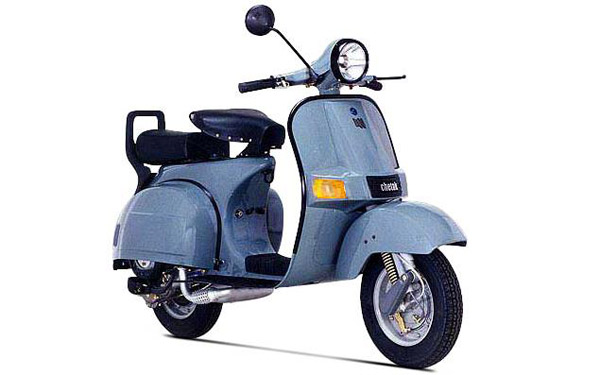 In 1981 BAL launched the M-50, a 50cc 2 stroke scootrette. It was soon replaced by a slightly higher powered sibling, the Bajaj M-80. The M-80 offered a great pulling capacity from its 74.08cc 2 stroke mill, making it a great success in the Indian market, especially in rural market. 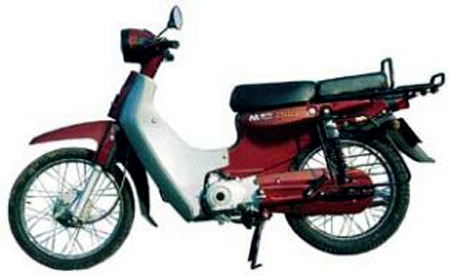 In the year 1990, Bajaj added a new feather to its cap by launching its first CVT scooter (Gearless scooter), named as 'Sunny'. It was a pretty successful scooter as it attracted teenagers and aged people as well, thanks to its lightweight body.

The 2-stroke era of motorcycles was the golden period for motorcycle enthusiasts as there were many legendary motorcycles in different engine capacity rolled out from various manufactures. And Bajaj was not an exception either, to tap the growing market of performance 2-stroke machines BAL shook hands with Kawasaki and brought their first 2-stroke 100cc motorcycle "Kawasaki KB100" in 1986.

The year 1991 saw BAL make a grand entry to the 4- stroke motorbike category, with its Bajaj Kawasaki 4S Champion. The motorcycle was a result of Bajaj-Kawasaki interrelation, where the Bajaj motorcycle induced a Kawasaki engine.

In 1997, BAL introduced the Bajaj Kawasaki Boxer with the same Kawasaki engine featured in the 4S Champion. Boxer became one of the top selling bikes for Bajaj during that period. The very next year saw the birth of Legendary Bajaj Caliber. The motorcycle went to sell like hot cakes, giving Bajaj a very strong market share. Caliber reached a peak of 100,000 in sales, within a period of 12 months. It was pretty special because the motorcycle was then produced in the new factory built up at Chakan, Pune by Bajaj to meet the never ending demands. 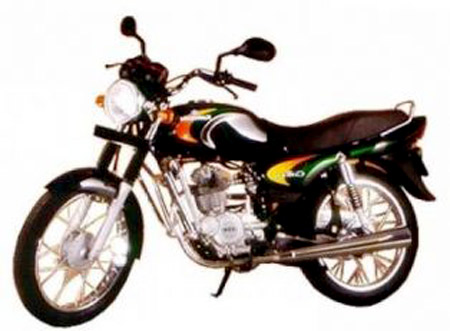 Birth of a Legendary brand:

In the year 2001, Bajaj astounded the motorcycle market by introducing the 150cc Pulsar (Classic). Bajaj was one of the first indigenous Indian manufacturers to add a performance motorcycle to their stable. The original Pulsar incorporated a 150cc air cooled, single pot mill capable of producing 12 Ps of maximum power. Front disk brakes were introduced on the bike, which was something special in the early 2000s. Soon an upgraded sibling was launched in the name of Pulsar 180. The 180cc version was capable of producing 15 Ps of peak power. Electric start was standard on the 180, while the 150 had it as an option.

2003 was a special year for Bajaj in terms of technicality. Bajaj patented their own Digital Twin Spark ignition (DTS-i) technology. The DTS-i engine had two spark plugs on either sides of the combustion chamber, making way for efficient and fast combustion. The DTS-i technology was first used in the Pulsar, and was launched as Pulsar DTS-i. The technology boosted the power by 1 HP and also increased the motorcycles efficiency. 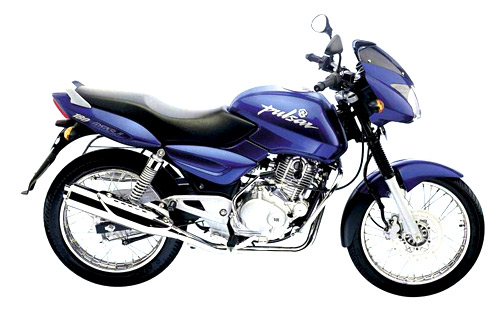 The year 2005 saw the birth of two new motorcycles in the form of Discover and Avenger DTS-i. It also launched a CVT scooter named as Bajaj Wave. Discover was launched as a commuter, whereas the Avenger was targeted towards the tourers. Both the bikes were welcomed very well and it was clearly seen in the rise of sales figures.

Fast forward to 2007, Bajaj had the fastest Indian motorcycle in their stable in the form of Pulsar 220 DTS-Fi. The motorcycle was first launched with Fuel injection and was capable of producing 20.1 Ps of power on tap. This made the Bajaj Pulsar 220, the fastest Indian made motorcycle. There was also a Pulsar 200 DTS-i, a slightly different carbureted model. Both 200 and 220 incorporated Oil cooling technology, first on an indigenous Indian made motorcycle. Bajaj's Chakan Plant won the Super Platinum Award for Manufacturing Excellence in the year by Frost and Sullivan. 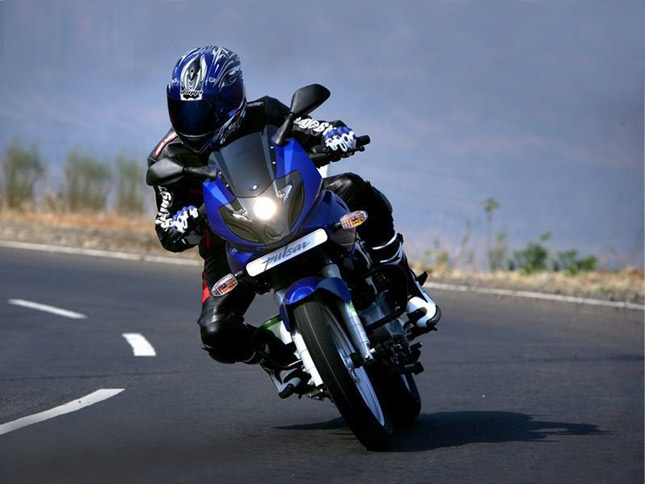 In the year 2009, Bajaj made a plethora of launches specifically Performance motorcycles. Following a good relationship with the Japanese manufacturer Kawasaki, Bajaj had a tie up to sell and service the Kawasaki Ninja 250R. 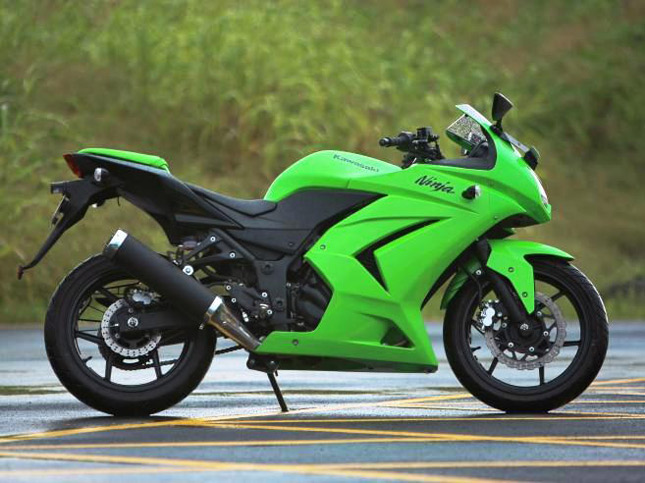 The Pulsar lineup was also revamped with the 150 and 180 receiving the fourth upgrade (UG IV). The upgrade included an all black theme, 3D Pulsar logo, full DC electrical system and tank scoops similar to the elder sibling 200. It also had self cancelling turn indicators, side stand indicator and a low battery indicator to name a few. The Pulsar 180 had beefier front forks, clip ons, fat rear tyre and a little power bump to 17 PS. 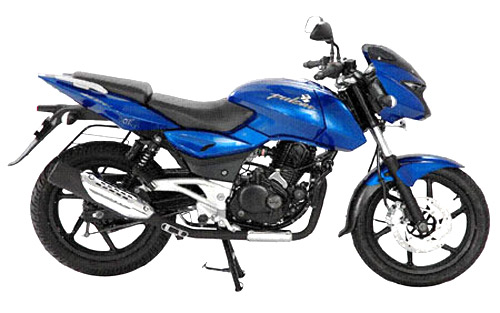 The Pulsar 220 was relaunched with a carburetor (Pulsar 220 F) replacing the fuel injector, and the production of 200 was stopped.

Bajaj was also one of the first manufacturers to launch affordable power commuters. The Discover 150 was launched in 2010 with a powerful engine, fat rear tyre and a new exhaust system borrowed from the Pulsar. The following year also saw a 125cc version of the Discover for the masses. 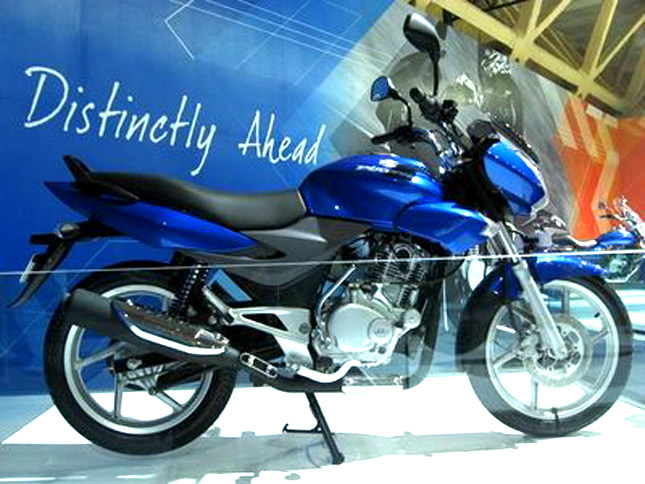 In 2011 Kawasaki decided to bring in the Ninja 650R through CKD, and Bajaj was given the opportunity to build the motorcycles and sell them in India. The tie up was strengthened, as two best in class Kawasaki motorcycles were sold by Bajaj. After sales service for the Ninja 250R and 650R were also done at Bajaj Probiking centres around India. 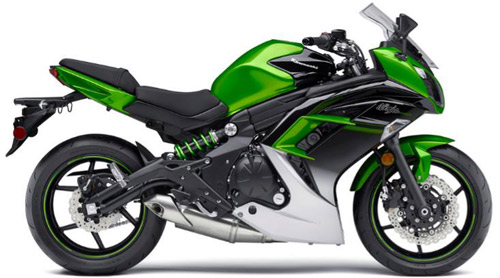 Bajaj had acquired about 14.5% stake from KTM Power Sports AG in the year 2007. As time went by, Bajaj and KTM signed a deal of cooperation so that KTM would help Bajaj develop water cooled performance engines. In return Bajaj produced and exported the small capacity KTM motorcycles all over the world, including dedicated sale via Bajaj-KTM Probiking showrooms in India. By 2013, Bajaj had acquired almost 50% of the company's stake. 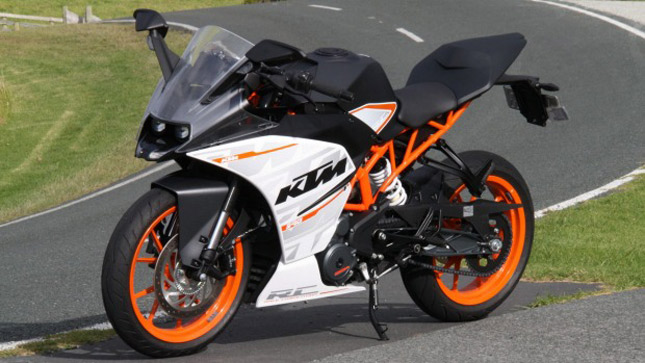 Birth of the new gen Pulsar:

In 2012, Bajaj launched an all new Pulsar with a new Triple Spark technology. The Pulsar 200NS (Naked Sport) was a Naked bike, offering 23 BHP of power on tap. The engine was closely related with its distant cousin, the KTM Duke 200 as part of the Deal of cooperation. The motorcycle also had an unique design made by Edgar Heinrich, paving way to good sales in terms of volumes. 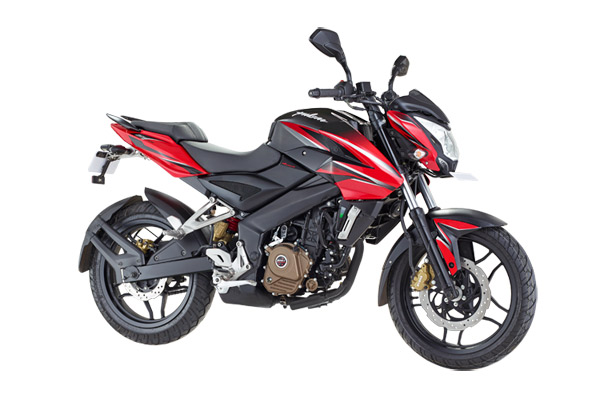 In 2014, Bajaj launched two stylish commuters in the form of Discover 150F and 150S. The 150F had a bikini fairing whereas the 150S had a conventional headlamp setup. The motorcycle had an all new 150cc 4 valve engine and was priced aggressively, to cope up with the competition.

2014 Auto Expo: Bajaj stunned the Indian Automotive sector by showcasing two high capacity prototypes named as the Pulsar SS400 (Super Sport) and Pulsar CS400 (Cruiser Sport). The SS400 was a full faired model, whereas the CS400 was a Naked sport cruiser drawing cues from the mighty Ducati Diavel. Both the motorcycles shared a common engine, which was closely developed around KTM's 375cc liquid cooled engine. 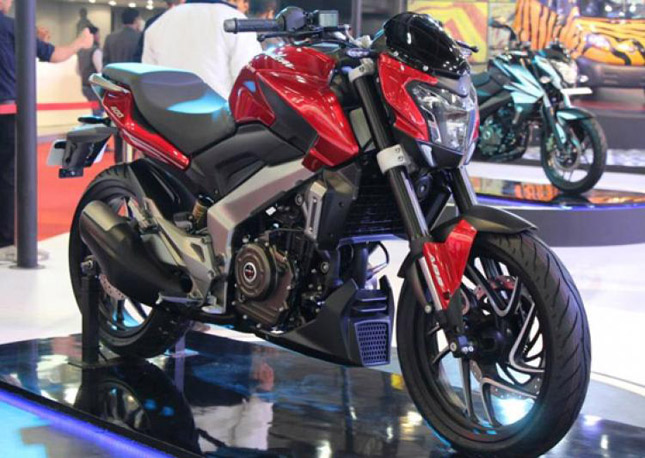 Refreshing the line up :

In the year 2015, the Pulsar brand got a few new siblings in the form of Pulsar RS200, AS200, AS150 and NS150. The RS200 was developed from the concept Pulsar SS400, taking all those visual extravaganzas while keeping the same 200cc heart of the 200NS fueled by injectors. The AS200 (Adventure Sport) was launched with a Bikini fairing (as in Pulsar 220), along with a projector lamp setup. The AS150 and NS150 were downscaled versions of their elder siblings. 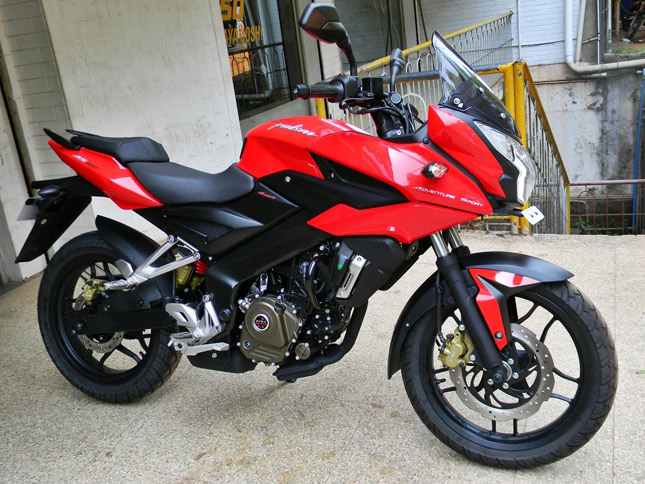 The Avenger 220 was updated with two models, Street and Cruise. The Avenger Street had a catchy Matt black colour with alloy wheels, making us remember the Harley Street 750. The Cruise had a retro design, with complete Chrome treatment in the spoked wheels, speedo console and fuel tank, along with an optional large windscreen. 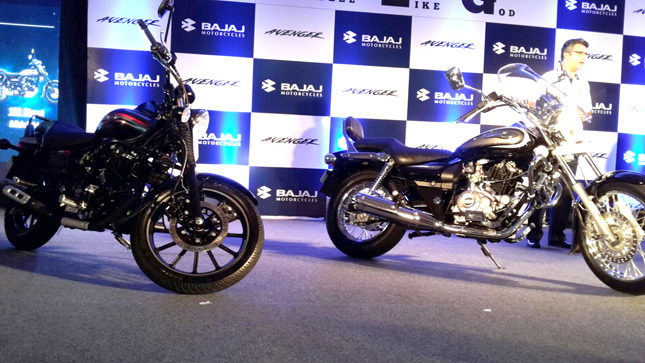 Bajaj started off 2016 with the launch of the V15. The Bajaj V15 was marketed as "Part of a war hero", as Bajaj had bought a part of India's legendary warship INS Vikrant and used the metal in moulding the tank of the V15. The design of the V15 was highly inspired from the Italian manufacturer's Moto Guzzi Bellagio. The motorcycle also sports a big 3D chiseled V batch, stating the Vikrant connection.

The Bajaj VS400 is in the final phase of testing, and launch is underway just after the festive season in India. The VS400 is just the renamed version of the CS400 which was showcased earlier in the 2014 Auto Expo. The VS400 gets a 373.2cc single cylinder, liquid cooled engine that is believed to be closely related to the KTM's 390 engine. Power figures are expected to be around 35 to 38HP. The motorcycle also sports a full LED headlamp setup which is a first for an Indian motorcycle.

Rajiv Bajaj also stated in a Press conference that, the entire Pulsar line up is to be refreshed in 2017 along with a power bump. 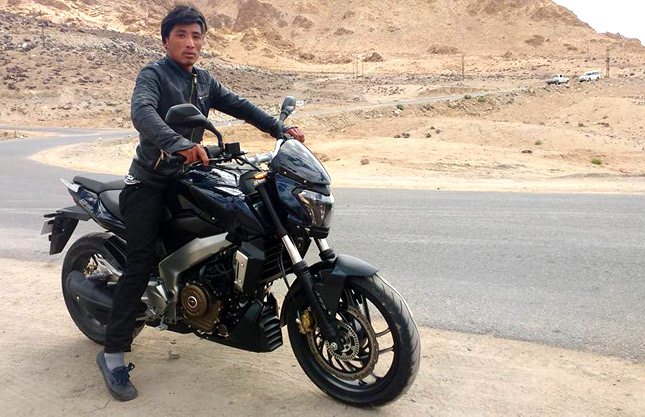 With all these new launches and updates it looks like Bajaj will have a much higher market share in the future. We, from BikesIndia wish Bajaj to come up with much more new powerful motorcycles, and to grab a strong market position as a whole.