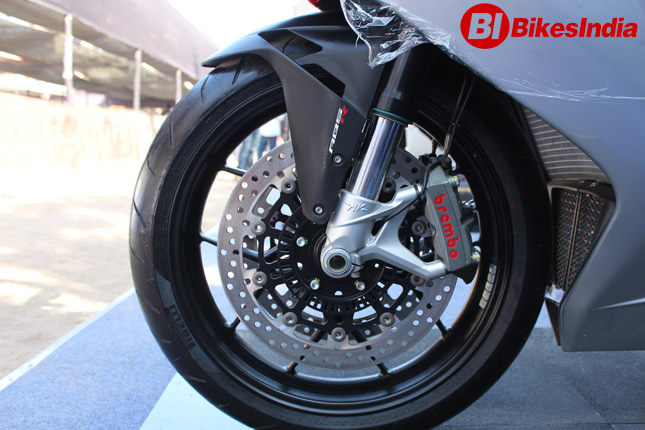 Under rapid or emergency braking the wheels tend to lock up, since the force applied by the rider on the tires is more than what it can take up. When this happens the rider falls down and his face faces the floor, which is bad . Modern technology grows every second, so the automobile manufacturers wanted to develop something that can prevent unwanted wheel lock ups, providing a shorter stopping distance. Hence they came up with the technology called ABS, meaning “Anti-Lock Braking System”.

In India TVS Apache RTR 180 was the first bike to receive dual channel ABS, further down the years bikes like KTM Duke 390, KTM RC 390, Honda CBR 250R and of course almost all the superbikes. Then came up the Bajaj Pulsar RS200, with Single Channel ABS in which both the wheels are modulated simultaneously and have a common centrally located speed sensor. Since the dual channel ABS is more common let’s get deeper into the concept.

When the front wheel of your motorcycle gets locked up, the maneuverability is reduced and when the rear wheel locks up the stability is compromised. ABS calculates the slip rate of the wheels exactly based on the vehicle speed and the speed of the wheels, based on this the system regulates the brake fluid pressure to achieve the target slip rate of the wheel. The feel of the ABS brake lever is different when compared to the conventional non ABS brake lever. In case of the ABS braking system even if the rider damps the brakes fully the ABS takes care preventing wheel lock ups.

Modern Dual Channel ABS consists of an ECU, Sensors at the front and rear wheels, a Hydraulic Pump and a Solenoid Valve.
ECU:-

The Electronically Controlled Unit is like Commander, it keeps control of the all other systems. It receives information from each wheel speed sensor in case any one of the wheels loose traction. The ECU then decides when to release hydraulic pressure through Solenoid valve in the brake channel. It monitors the signal inputs from all the components of the system.

The pump in the ABS is used to restore the pressure to the hydraulic brakes after the valves have released it. A signal from the controller releases the valve at the detection of the wheel slip. After a valve releases the pressure applied from the rider, the pump is used to restore a desired amount of pressure to the braking system. The controller will modulate the pumps status is order to provide the desired amount of pressure and reduce slipping.

A speed senor is used to determine the acceleration and deceleration of the wheel. The sensor uses a magnet and a Hall Effect sensor, or a toothed wheel and an electromagnetic coil to generate a signal. The rotation of the wheel or differential includes a magnetic field around the sensor. The fluctuations of the magnetic field generate a voltage in the sensor. Since the voltage included in the sensor is a result of rotating wheel, this sensor can become inaccurate at slow speeds.

There is a valve in the brake line of each brake controlled by the ABS. The work of the valve is to release the hydraulic pressure from the brake line. The majority problems with the valve system occur due to clogged valves. When a valve is clogged it is unable to open, close or change position. An inoperable valve will prevent the system from modulating the valves and controlling pressure supplied to the brakes.
In a dual channel ABS both the wheels are modulated individually and have a separate sensor for each wheel. Some bikes come with RLP meaning Rear Wheel Lift Off Protection, where on the application of emergency front brakes, the possibilities of the lifting up of the rear wheel or a stoppie is prevented. In the case of a dual channel ABS both the wheels will be controlled by the ECU unlike the single channel in which only the front wheel is controlled.

There are various manufactures of ABS out of which brands like Bendix, Bosch, Delco Moraine, Kelsey Hayes and Lucas Girling are prominent. Bosch is the most commonly used system for two-wheelers, simply because it is cost effective and has proven a lot in the braking division.

It is said that Indian Government has made ABS compulsory for two wheelers above 125cc from the year 2017, if not a dual channel at least a single channel because it can be more cost effective for the manufacturer and affordable for the common man.