Ladakh: Riding in the groups or go Solo?

Ladakh, unofficially known as the Mecca of bikers. The harsh terrains of Ladakh are not easy. Every year hundreds of bikers ride to Ladakh. Some seek adventure, whereas some the scenic beauty. There are mainly two types of bikers who ride to Ladakh. One who form groups and ride and the other kind who just prefer keeping it small and ride alone. It is a point for a debate actually, riding solo or in groups. We try to analyze both the ways.

Bikers who ride in groups: These are formed by bunch of friends or by some travelling company who charge some fees for their expertise. Most people ride in huge groups because Ladakh is something which should not be taken lightly. Most of the time, it is the comfort of large groups where if something goes down, people are there to help you. These groups usually are equipped with backup vehicles.

However, there’s another side to the story. While people ride in such huge numbers, they cannot really enjoy the ride I feel. They don’t necessarily have that freedom to stop whenever and wherever they want. They have to run according to the plan, and most of all, such large numbers are not that safe as chances of accidents are high due to lack of co-ordination. Again it depends on the people you are riding with.

Bikers who ride solo: These are the people who do not prefer large groups. Usually they plan the ride by themselves and develop the plan along the way. There is of course a risk of break down and not receiving help but people who really want to have adventure should really do this. You won’t get a comfort of help being readily available though, and really have to rely on your knowledge and luck.

The Hybrid Type: I wasn’t aware of this type until I actually did it. And it was the experience of a lifetime. It is something where you usually have a very small group but you don’t necessarily ride together all the time. In the July of the year 2015, three of us including me went for a Ladakh ride. But instead of riding together all the time, we decided to keep some gap of 30-40km between us so that we will get to enjoy the ride more as a solo rider.

According to most of the people this was sheer stupidity, because if something goes down, we wouldn’t be there to help each other. But again, in search of adventure, holding back was not an option. Seeking adventure but not leaving the comfort zone is not something you would want to do. So we started riding with huge gaps and it gave me the experiences that shaped my life.

By riding like this we were not slowing down or forcing someone to go faster. All of us were riding at our own pace and our own comfort levels. All was going well until we started riding from Kargil to Padum( Zankar Valley). After stopping for lunch at Rangdum, we were to ride for some 100 kilometers more to reach Padum. If you have been to Padum, you know how deserted that road can be. And it tested our mental strengths like anything.

After I reached to the top of Pensi La (the view of Drag Drung glacier from Pensi La is out of this world) I started to get little frustrated, I had been riding for hours on the deserted road with an average speed of 20. And couldn’t find any people or vehicles on the road. In such situations the mind plays tricks with you. I was imagining things. I could see people when seen from a long distance, when I went closer they were just rocks.

There was a time when I almost broke down due to frustration as there was no human population in sight. But kept riding as this was the only way I had, and finally had a sigh of relief when I reached Padum. This was just a mental test and there was more coming for me when we started the return journey back to Kargil. Again riding alone and keeping huge distances. 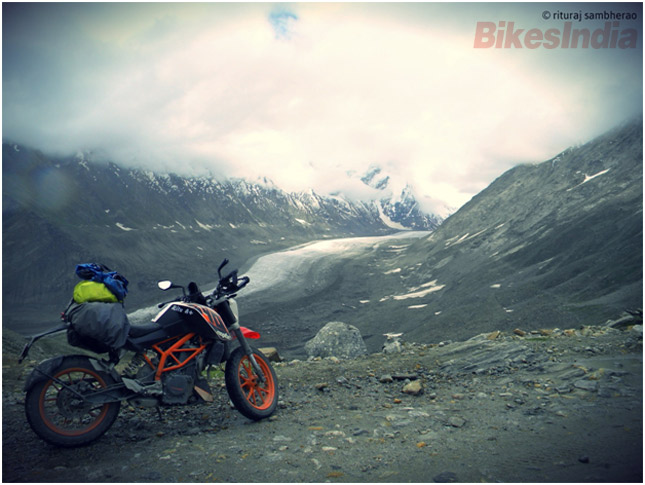 After few hours of riding, I found a water crossing, I would not categories it as a difficult one. But as luck would have it, I got kinda distracted by one beautiful snowy mountain on the left and went into the water with wrong gear. Next thing I know I was lying there in the water. It was a nightmare as the water was very cold as it was melted from the snow of the mountains. I looked for help but no one was around. I couldn’t just stand there and watch.

I tried to lift the bike, but my legs couldn’t get decent grip.Tried 4 to 5 times but couldn’t lift it up. I waited for some time and again gave a final go. This time I was successful but at the expense of my shoulder getting sprained. The lack of oxygen was not helping at all and I had to sit there for almost 30 minutes to catch my breath.

After that, again the deserted road started with the shoulder paining like anything. But this time I was sane. With little phobia of water crossings but something definitely changed.The more problems I ran into the more furious and courageous I started becoming. Received help from sources I would have never imagined. Random people, helping you out for no personal gain. Things falling in right places just in time so that you can ride ahead. Now when I look at it, it all feels like I just woke up from a dream.

*** Water Crossing where I fell. Saw someone finally, but not in time. In the second pic, my bike waiting for me while I catch my breath

Riding solo or in groups is a point of a debate actually. People say riding alone in those ladakh terrains is utter nonsense and nobody will be there to help if something goes wrong, and they are right. But unless you let all the comforts go, adventure is never going to happen. Riding to Ladakh is more than just an off-road challenge or a scenic ride. It’s about knowing your limits and pushing them when required, it’s about doing what needs to be done, no matter how difficult it seems. It’s about gaining experiences which will shape your lives for good, it’s about trusting people you have never met before and it’s about restoring your faith in humanity.

I am not sure if this article has a conclusion, you get what you want to get out of it. My job was to put facts across. It’s up to you to go solo or in groups. But if you ride alone and you manage to come back alive, you will be a different person than you were before the ride, I guarantee you that. All the best for your next Ladakh ride. Have an adventure of a lifetime, cheers!