When talking about motorcycle geometry and dynamics, Rake and Trail are two names that cannot be ignored. Bikers often talk about these terms and if you’re alien to this concept, here we bring you an in-depth of the topic. But before we get started, I’d like to lay some ground work for the technical terms we shall be discussing.

• Steering Head is the tubular head of the chassis about which the steering system is pivoted.

• Steering Axis is an imaginary axis passing through the centre of the steering head of the bike.

• Front Fork Axis is the axis passing through the centre of the front suspension forks as observed from the side.

• Offset is the distance between the front fork axis and steering axis.
What is Rake?

Rake is the angle at which the steering axis on a motorcycle is inclined with respect to the vertical. The angle is measured from the axis passing through the centre of the front wheel. It is analogous to the caster angle in cars.

Trail is the distance between the points where the wheel axis and steering axis intersect the ground. It is obvious from the geometry that trail is directly depended on the rake angle. 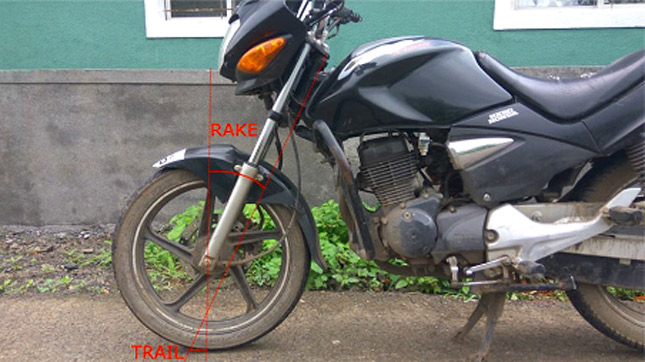 Bikes with upright forks would be extremely difficult to handle because when load is applied on a wheel from directly above, it tends to deflect to either side instead of rotating and leading the bike ahead. Such a bike would be uncontrollably wobbly. Remember when you were first learning how to ride a bicycle? How the front wheel would wobble to and fro or tip to one side no matter how hard you tried to keep it straight? A bike without rake and trail would be the same, except that you can never learn to balance it, because it is kind of impossible.

However when the steering head is set back at an angle, then the load is applied obliquely and the wheel will move ahead as intended. Thus rake gives stability to a bike and makes riding it manageable. Apart from that, rake is also important to the chassis design as it better distributes shocks as compared to an upright setup.

Rake and trail go hand in hand. A higher rake tends to increase the trail. Trail is the distance by which the contact point of the tyre is trailing behind the steering axis at the ground level. This produces a lever effect. The friction resistance that contact patch of the tyre experiences on the road is the ‘load’ on this lever and the steering axis is the point of rotation or ‘fulcrum’. When the steering is deflected, the contact patch exerts a restoring force due to this lever effect and brings the steering back to its normal position. Elementary physics tells us that larger the length of the lever more the leverage we get. Similarly, as the trail increases, so does the restoring force, giving the bike a better stability.

But as our wise forefathers have said, excess is evil. A healthy trail gives straight line stability to our bikes, but increase it further and it gets more stable than we would prefer. A more than necessary trail will make manoeuvring a bike difficult as it would resist any deflection at high speeds, including our steering input! Now that is something we don’t want. Thus it is very important to have the right amount of trail that makes the bike stable but at the same time doesn’t increase the effort to steer it too much.

The rake angle on bikes generally lies close to 30⁰ with the trail anywhere between 120 to 180 mm. Cruisers have higher rake and trail to give them good high speed stability. Rake and trail are the reason why cruisers inspire so much confidence in the rider at high speed and rake and trail are also the reason why handling large cruisers in traffic at low speed is so cumbersome. Also, the wide handle bars on cruisers are provided to reduce the steering effort induced by a large trail. Conversely, sports bikes tend to have smaller rake and trail because they are meant to be flicked around easily through the corners. This does not mean that sports bikes are unstable at high speed, because rake and trail although important, are not the only parameters that affect the stability of a bike. The rake angles on commuters, street fighters and tourers are generally between that of a sports bike and a cruiser in that order.

If you are not satisfied with the stock settings on your bike, aftermarket changes can be done to the trail to suit your needs. There are no exact specifications on how much the rake and trail should be for a given type of bike and adjustments are purely based on trial and error and the requirement of the rider. Generally manipulating the rake is not easy and hence people tend to meddle with trail. Although trail is directly depended on the rake angle, trail can be changed without upsetting the rake. Following methods can be used for aftermarket adjustment of trail.

• Changing the diameter of the front wheel changes the trail since the distance along which the steering axis deviates from the wheel axis is increased. Thus a larger front wheel will give a larger trail and better stability.
• Similarly, changing the height of the front by installing aftermarket front forks also changes the trail as required.
• Aftermarket spacers can be used at the front wheel hub to increase trail. This is the best way to manipulate a bike’s trail. In fact, the offset between the front fork axis and steering head axis is provided by the manufacturers for exactly the same reason – to decrease the trail while maintaining desirable rake.
If you have any queries, shoot them in the comments section below.