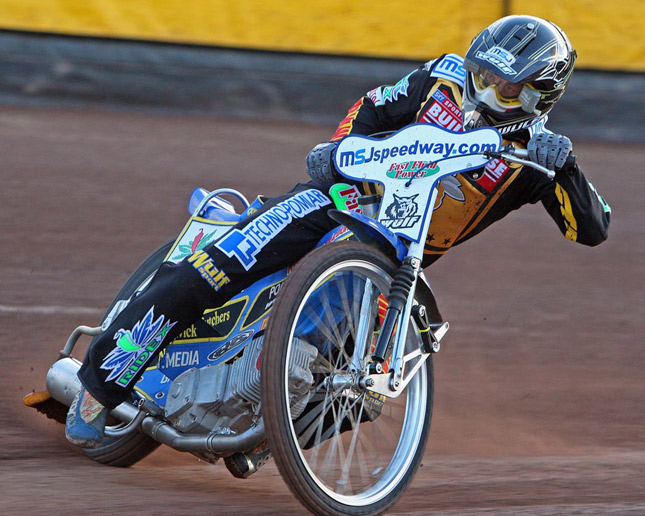 Speedway Racing falls under the Track Racing category. It is regulated by the Fédération Internationale de Motocyclisme (FIM). It goes back to as long as 1914. An American rider used the riding technique “Broadsiding” before 1914. By the 1920’s, this technique was used to race and it was known as “Short Track Racing” back then. So, let’s see what differentiates Speedway Racing from other sports.

Track Racing is done specifically around oval tracks, mostly in a counter– clockwise direction between 4 to 8 riders. The race is a lapped one with the winner being the one who accumulates the most points over a number of heats. Let’s get into more details.

The art of guiding one’s speeding machine into long controlled skids is known as Broadsiding or Powersliding. The rider needs to have honed skills and sheer strength to master this technique which is the key to swiftly tackle the round bends on the speedway tracks. 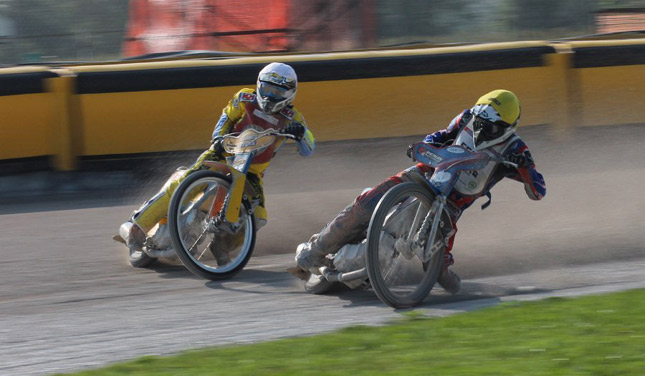 The FIM lays down the rules to how the professional speedway tracks will be constructed. Speedway racing tracks are leveled oval shaped tracks. The layout is very simple, two straights joined by two semicircles. The track length is between 260 to 425 metres. A white line marked across the track mid way on one of the straights indicates the start finish line. The starting area is divided into four equal parts by white lines and they extend back 1 metre from the starting line, these are called gates. The minimum track width has to be 10 metres on the straights and at least 14 metres on the bends. The tracks also have to provide a garage or pit area for motorcycles along with medical facilities. 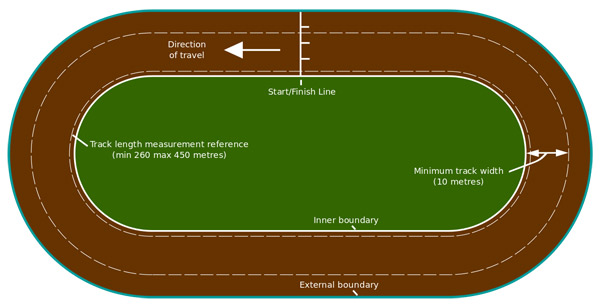 The track surface consists of four layers of grading. The top most level is instrumental in allowing the racers to slide their bikes. It consists of shale, granite, brick granules or any other loose material. The top layer is leveled at intervals to maintain its surface. It is also sometimes watered to prevent it from becoming too dry and protecting the riders and spectators from dust. Safety wise, they use air fences, suspended wire fences and wooden fences. Air fences are made up of inflated panels installed on the bends. It dissipates energy by allowing an impacted area to compress and transfer air into the rest of the fence through blow off valves. 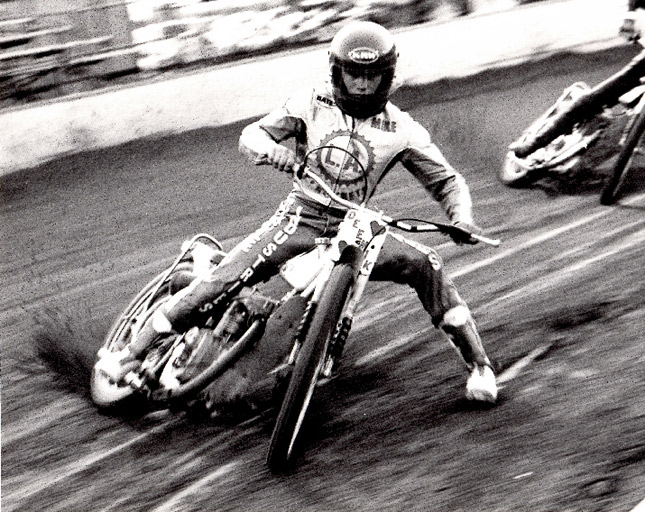 The speedway motorcycles are the rarest bikes used in motorsports. They are a complete different breed and are exclusively used only for track racing. Don’t be fooled by the bare bones design of the bike, underneath hides a beast which can propel you from 0 – 100 km/h in 3 seconds. Now, imagine riding this bike sideways, without any brakes, on a track which is not wider than 14 metres and is made up of loose surface! You heard right, speedway bikes have got no brakes at all!

The bikes use only one gear and run on pure methanol. Broadsiding is very difficult to learn, especially for beginners. The trick is to keep the rear wheel spinning even if you have skid too far or else the result is disastrous. If you shut the throttle in middle of a slide, the bike will lose no time to make you airborne. 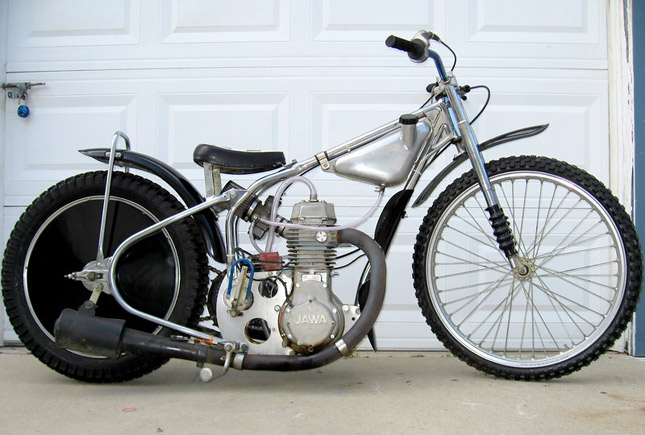 Jawa from Czech Republic and GM from Italy are the only leading manufacturers of these bikes. Companies like JAP, Weslake, Godden, ESO, Datzmun and others have stopped making speedway bikes. In the past where bikes used upright (vertically mounted) engines, after the 1990’s they started using the laydown (horizontally mounted) engines giving them a lower center of gravity and easier handling.

The bikes are fitted with 500cc air-cooled SOHC single cylinder carbureted engines. They make around 85 hp for a bike which itself weighs around 80 kilos. This enables the bike to complete one heat in less than a minute. The regulations state that the bike should not have any kind of brakes, it should weigh minimum 77 kg, have a four-stroke single cylinder engine with one carburetor and single spark plug and a maximum engine capacity of 500cc. It has to be fueled by 100% methanol, have an approved silencer and a handlebar with a width between 650mm to 850mm amongst many other rules. 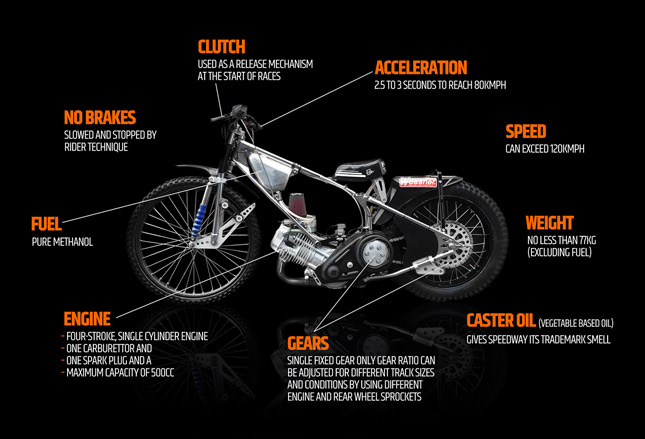 The dry clutch used is crucial in giving an optimum start which many times decided the outcome of the race. There are some safety parts like dirt deflector, shatter resistant plastics, additional chain guards, guards fitted over almost all moving engine parts to prevent hands or fingers from being cut. There is also a safety cut out device fitted like the ones we saw in bikes used for mountain climbing.

There’s a cord attached to the riders right wrist with the other end attached to the kill switch located next to the throttle. Its job is to cut off the electrical circuit and stop the engine in case a rider falls off. The bikes also have a fuel tap which releases fuel to the carburetor. 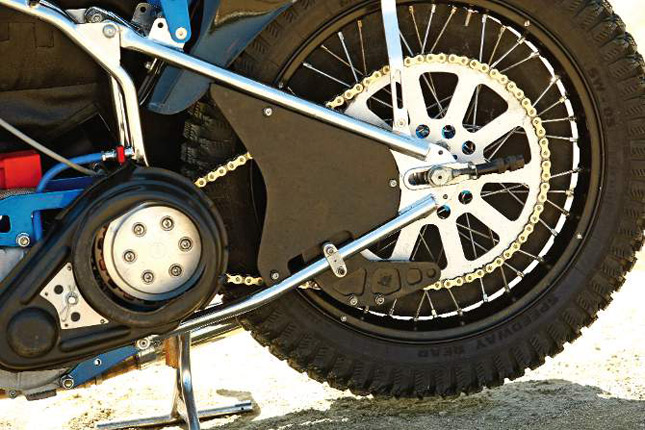 The rear wheel is a very important part of speedway as are the specially designed sleek knobbly tyres. If normal wheels or tyres were used in speedway, the tyres would definitely move on to the rim, hence the tyres in speedway are screwed to the rear wheel. The bikes do not have the conventional suspensions. They get a slightly adjustable leading-link front fork. There is no suspension at the rear.

Speedway racing is started by a standing start. The races are known as heats. There are mostly four laps per heat. Mostly there are four riders/teams competing against each other. In all heats and official practices, riders must wear a proper helmet approved by the authorities. Riders are identified by coloured helmets worn by them. The colours used are red, blue, white and yellow/black quarters, with green and black/white checks also used. The riders have to get their bikes to the start line on their own and without any assistance. 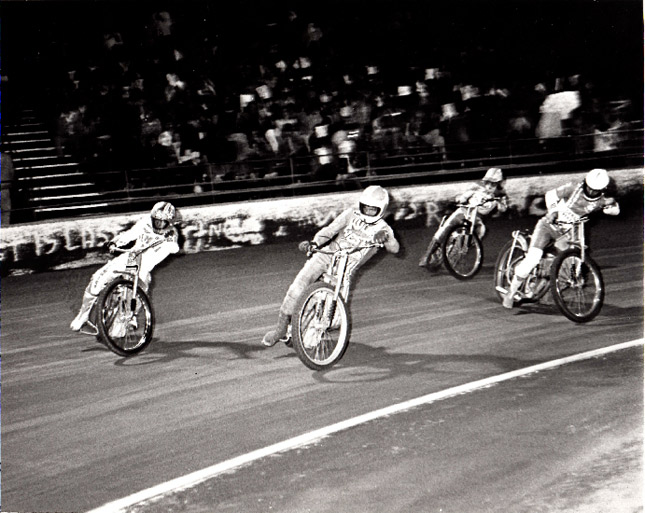 Historically, pushers were allowed at the start of the race but due to safety concerns, assistance is now illegal. The riders start parallel in their respective gates. Riders are given two minutes warning of the start of each heat. This is signaled to them by means of a hooter or bell audible in the pits, and by flashing amber lights situated in the pits and near the starting line. Any participating rider not ready to start within this period is excluded from the heat.

Directly over the start line, a spring-loaded starting gate is erected that supports two or three cotton tapes tightly stretched across the track. It is electrically operated to allow the Referee to start heats remotely. A rider is excluded from a heat if they touch the tapes once the green light has been displayed. Once the race starts, the rider can’t get any outside assistance such as push-starts.

The winner is decided on the basis of the points he accumulates over the competition. They have a 3-2-1-0 scoring method for races having four riders. The rider finishing in first place gets 3 points, the one finishing in second gets 2 points and so on. In case of a tie after the last heat, there’s a dead heat to decide the winner. 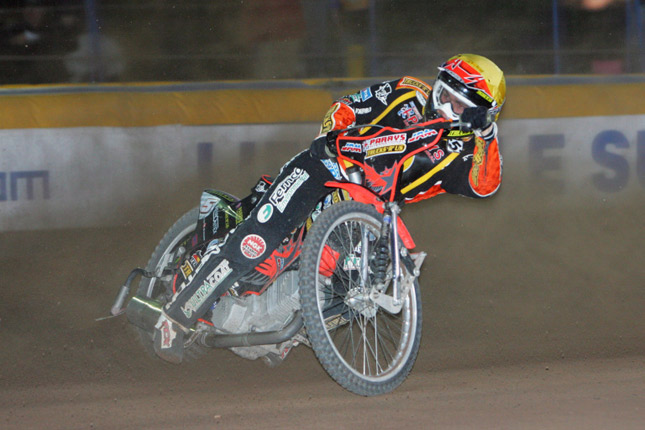 The FIM Speedway World Championship (SGP) is the biggest of them all. Tai Woffinden is the defending champion from 2015. Currently Greg Hancock is leading the 2016 season which consists of 11 events worldwide. There is also an Individual Speedway Junior World Championship for the ones aged under 21. The sport is the most popular in Europe and people come out in huge numbers to support the riders and teams. Speedway is an amazing experience for spectators as they can view the entire track from one seat and see all the action happening in front of their eyes.

Billy Hamill is one all time favorite racer with numerous championships under his belt. Greg Hancock is another famous rider who has won the AMA U.S. National Speedway Championship for 7 times. Speedway World Cup is also held annually. There are numerous other speedway championships held around the globe.