Have you heard almost every biker you met, say he/ she has been wanting to ride to Ladakh or has already done so? Well, me too. Since I ride, I too was a part of that group of people and was pulled into visiting LEH Ladakh this year. I rode my KTM Duke 390 from Bangalore to Ladakh and back and noticed that Ladakh isn't a road less traveled anymore! Apart from the movie 3 Idiots, beautiful heavenly views and cool climate being responsible for making Ladakh go viral, here's why Ladakh isn't a difficult place to be in anymore:

Everybody wants to do it: 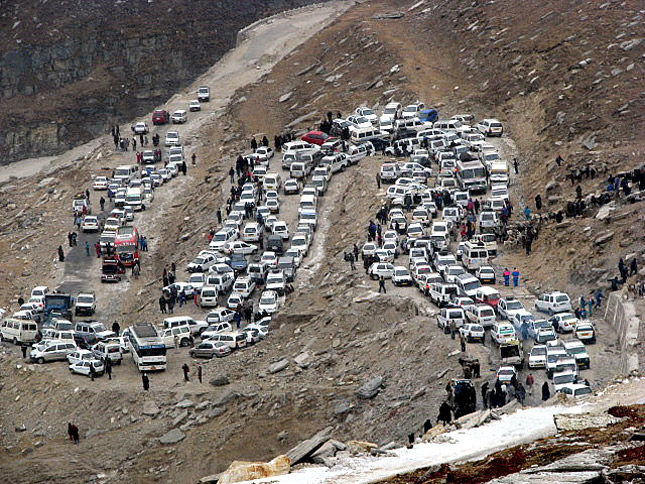 As I mentioned, everybody wants to visit Ladakh which is OK but I saw most people who were obsessed with only clicking pictures and not enjoying the place. It is just that one place a person wants to visit because all of their friends have gone there and clicked amazing selfies! I won't hesitate in saying that Ladakh has become a place where people spend money to visit, mainly to click selfies. When it comes to riders, many want to 'conquer' Ladakh by riding from one end of the region to the other end and feel invincible for it. Well frankly speaking, it isn't a big deal in any way, especially after considering the amount of infrastructure that has come up. A road less traveled is one that very few think of riding on but it is just the opposite in case of Ladakh. 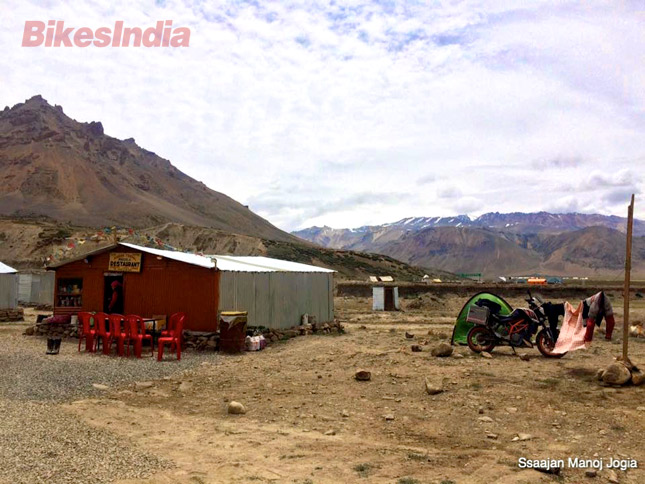 If you're riding in the Ladakh region, then you could encounter a Dhabha at least every 20 to 30 kilometers where you could spend the night or just fill your stomach and carry on. From Chocolates to Maggi, from Parathas and chai to bread omelet, you get almost everything that you need to satisfy hunger. If that is the sort of facility you get in Ladakh very often, how can it be unforgiving and treacherous? The Dhabhas in Ladakh and the hotels in LEH cater to lakhs of tourists every year. In LEH city, you get accommodation options starting from approximately 500 INR per night for a room to approximately 25,000 INR! That says a lot about the facilities in the region. Reaching LEH by road could be 'adventurish' but staying there is like staying in any other hill station, except that the people are very friendly and the views around the city are staggering! 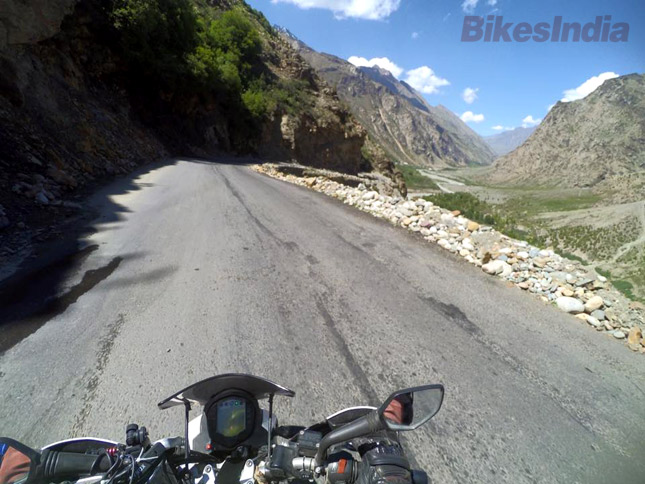 Yes, you read that right. I saw a lot of the LEH- Manali stretch was tarred and the rest was in the process of being tarred. That means almost any vehicle would be able to make it to LEH without any problem. When it comes to motorcycles too, I feel that even Superbikes will now be able to make it to LEH from the Manali- LEH Highway. The LEH- Kargil- Srinagar route definitely has more tarmac which a lot of the big bikes prefer but the Manali- LEH stretch isn't that bad either. I remember seeing pictures of Ladakh a couple of years ago that looked like a place where civilization and roads were literally absent, but not any more. Of course, there are water crossings and landslides one needs to be wary about when riding in Ladakh but they're pretty manageable, unless you're a noob. Thinking of going on a proper adventure away from civilisation? LEH Ladakh may not be the place for you then. 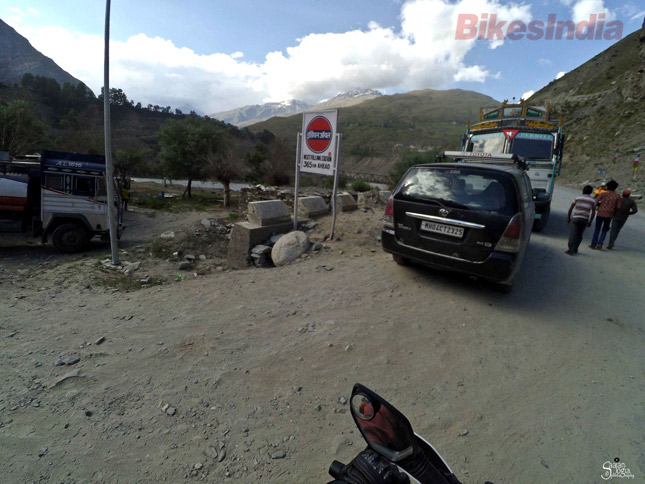 Have you been seeing ads of tour agencies that take 15 to 20 bikers in a group from Chandigarh to LEH and back for prices ranging from 25,000 INR t0 40,000 INR. Yes, these guys take people who 'want' to be in a group when traveling through Ladakh. Many people need company to ride with, mainly due to fear or lack of experience and hence tag along with these tours that have an itinerary to follow and usually last 10 days to 2 weeks. What's worse? They have a car following them as a backup vehicle that contains oxygen cylinders, spare parts, first aid etc. Now, considering health aspects, the backup car makes sense but carrying people's luggage, spare parts, etc is weird because then it won't be called an adventure anymore, there's no aspect of uncertainty involved! 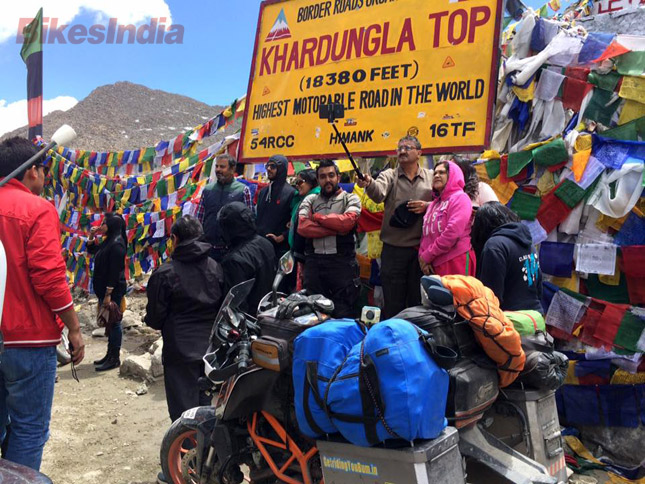 The so called 'highest motorable road in the world' is one of the primary reasons why tourists flock together and visit LEH Ladakh- to get a picture with the board that says 'Highest motorable road in the world'. It does sound cool and makes people proud of when they click pictures with it as there would be at least something adventurish they could share with their friends. But frankly speaking, Khardungla top (K top) is very close to the city of LEH and hundreds of taxis visit that board everyday with tourists inside them.

The funny thing that I noticed though is that the claimed 18,380 feet altitude of K top has been challenged many a times by various websites that mention the altitude reading to be incorrect. My Barometric GPS meter indicated 17,280 feet while I stood beside the board, looking at the chaos and traffic caused by taxis and selfie obsessed tourists. Another funny thing was that I got stuck in traffic at such a high altitude for 40 minutes, while I stared at another board put up by the Indian Army, advising tourists to not stay at such high altitudes for more that 25 minutes! I can openly say that the K top board generates loads of Tourism revenue for LEH. 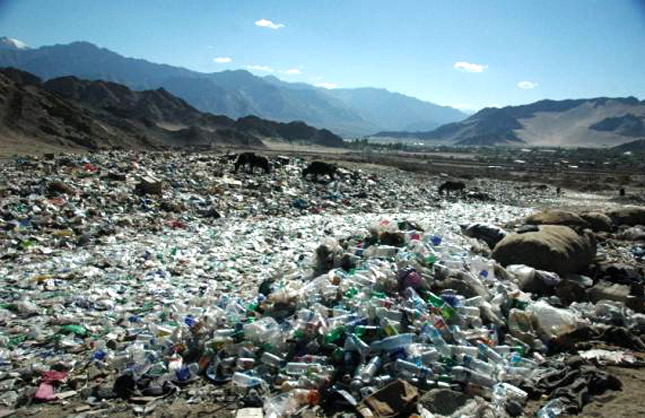 Thankfully, since Ladakh is at a high altitude, a lot of people who have major health issues would avoid visiting it and that by far is quite a big chunk of our population. BRO (Border roads organisation) sorted the road problem out by building roads in a place with extreme conditions, primarily for hassle free movement for the army vehicles.

I'm not sure if anything would be done to address the 'altitude sickness issue' as that is a natural occurrence. Of course, there are army quarters on the way to Ladakh that provide treatment to people affected by high altitudes but it continues to affect a lot of riders, primarily because people don't want to acclimatize and climb gradually, especially since a lot of them have gotten used to viewing life itself as a race and maybe because it is considered 'manly' among a lot of bikers if one plays around with health and covers the Ladakh region on a motorcycle as soon as possible.

But to a motorcyclist and a nature lover like me, development is a great thing to happen to a region like Ladakh, a lot of the locals too benefit largely from tourism but what pains the most is by looking at a place like Ladakh, gradually lose its essence to discarded mineral water bottles and packets of chips. 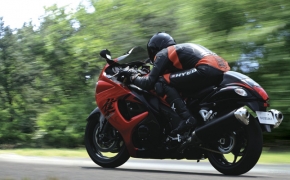 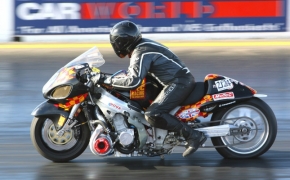 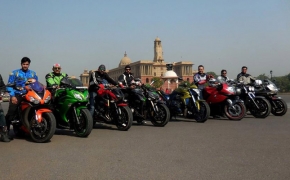 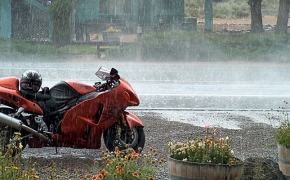