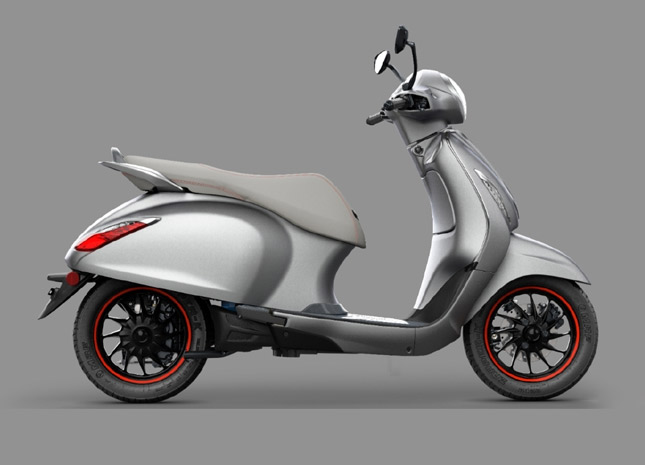 Bajaj Auto Ltd. (BAL) has unveiled much awaited Urbanite Chetak scooter but in electric Avatar. The Indian two wheeler manufacturer used to have this brand- Chetak as one of its most successful products in scooter segment back in its heydays. After remaining distant from Scooter segment for years Bajaj auto has finally decided to make a re-entry with its flagship brand- Chetak.

The spy pictures of the scooter have been surfacing on the internet for quite some time but the intention of Bajaj was never clear about the product. It was not clearly known whether the scooter is going to be built on Electric platform or the company would introduce something with conventional 4-stroke technology. But with the official introduction of the "Urbanite Chetak" Bajaj has made their intentions very clear that they are not merely coming back to the Scooter segment but they are coming with a BANG.

The new Urbanite Chetak e-Scooter is based on brand new platform. The Urbanite Chetak's bodywork especially the side panels and the round headlamp is inspired by the legendary Chetak. Chrome trims on the headlight and the front faring along with sharp lines on the body panels make the scooter more modern looking.
Features like fully digital meter console and Bluetooth Smart connectivity for rider makes the Urbanite Chetak one of the serious contenders in its segment. While the details of the scooter is mostly unknown, Chetak draws its power from an IP67 rated lithium-ion battery which offers a range of 95kms in Eco mode and 85km in Sport mode when fully charged.

The new Bajaj Urbanite Chetak will come in six metallic color options- black, white, silver, blue, red and gold. While the production of the scooter is already begun it will be officially launched somewhere in January 2020. The company has plans to make the scooter available in phased manner and it will start from Pune and Bangalore. The price of the new Urbanite Chetak can be expected between Rs 65000 to Rs 75000.