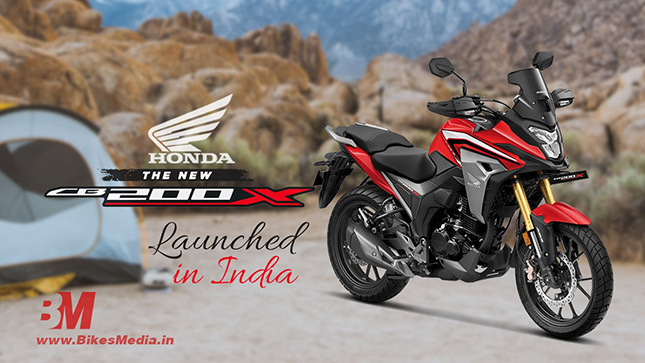 The new Honda CB200X is powered by the same 184cc, single cylinder, air-cooled engine that does duty on the Hornet 2.0. The engine produces 17.03 bhp of power at 8,500rpm and 16.1Nm of torque at 6,000 rpm. The motorcycle is provided with 17-inch alloy wheels at both ends, the front is suspended on the golden color upside down fork and a monoshock at the rear end of the bike. The braking setup at the new Honda CB200X includes a single disc at both ends.

The design of the new Honda CB200X is based on its elder sibling- CB500X, the half front fairing with its angular side panels looks identical to the CB500X. While the front headlight looks a direct lift from the Hornet 2.0. The bike also gets knuckle guards, high setup single piece handlebar, tall black windscreen and an underbelly engine cowl; completing its ADV silhouette.

Features wise the new CB200X follows the same list as its street bike version Hornet 2.0. A full-LED headlight setup with the LED indicators integrated within the knuckle guards. A fully digital instrument console is featured to provide all the necessary information about the bike. Considering the styling and purpose of the Honda CB200X, it doesn’t have a direct rival in the segment. The Hero XPulse 200 is the only bike that comes any closer to the CB200X in competition, that too the earlier is more off-road riding oriented bike.