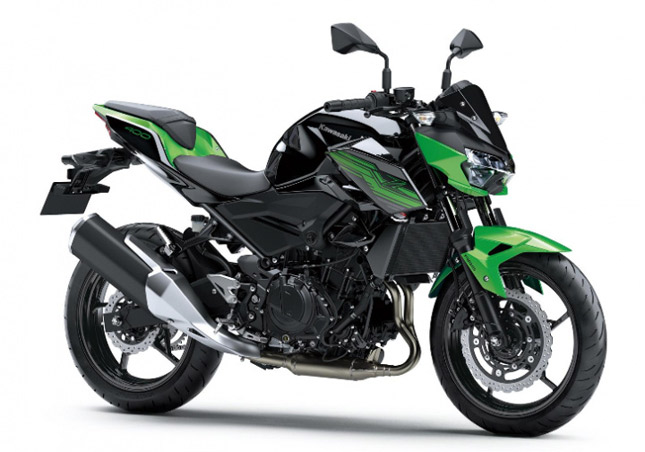 Several months ago Kawasaki filed an emission document with the California Air Resource Board (CARB) for 400cc motorcycles. One was Ninja 400 which was released sometimes back. Today we know who the next one is. Kawasaki revealed the Z400 at EICMA 2018 and the bike features a number of upgrades.

Talking about the design of the Z400, it looks distinct from the current ‘Z’ series bikes. It features LED lights, a new windscreen, reshaped bikini fairing, and a reworked tail section. The new design feels similar to the Ninja 400 and to the Kawasaki’s new design language in general. There are a lot more edges on the body and outlines of different body parts are very sharply defined.

In terms of the engine, the Z400 gets the same engine as Ninja 400. The parallel twin, liquid cooled, fuel injected 399cc motor produces 49 HP and 38 Nm of torque. The power will be restricted to 45 Horses in Europe due to A2 license restrictions. The engine is connected to a 6-speed gearbox.

The Z400 uses petal disc brakes at both ends with a dual channel ABS. The front suspension consists of 41 mm telescopic forks while the rear has a pre-load adjustable monoshock. The bike has no fairing as a result, it is 1 kg lighter than the Ninja 400. Although it would be important to note that the international version of Ninja 400 weighs 167 kg, while the Indian version weighs 173 kg.

The seat height of the Z400 is fairly accessible at 785 mm, which is a good news for riders with an average or short height. The bike also gets a bigger 150/60 tyre for improved performance and stability. The instrument console on the bike is fully digital, however, it is cleverly made to look like an analogue unit.

The Z400 could come to India and it can very well be a huge success. Only if the Kawasaki can adopt a decent pricing for it which is not as outrageous as the Ninja 400.
Tweet