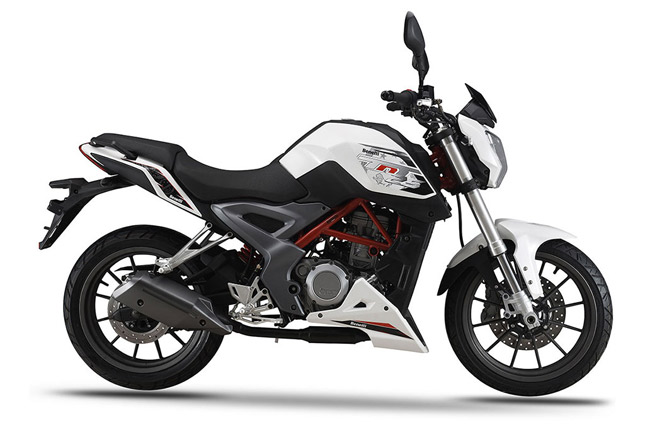 DSK Benelli has launched their least capacity motorbike with single cylinder engine- TNT 25. The uni-cylinder roadster is been showcased by the company at the recently concluded EICMA motor show at Milan. The latest TNT 25 has carried the legacy behind alongside the signature design style of one of the oldest automobile companies of the world- Benelli.

The new Benelli TNT 25 is featured with single cylinder 250cc liquid cooled, 4-valve engine with DOHC setup. The mill is capable of producing 28.15 Bhp of power at 9800 Rpm and 21.61 Nm of torque at 8000 Rpm. The high revving engine is mated to 6-speed transmission and also capable to achieve top speed of 145 Kmph. The new Benelli TNT 25 is suspended on the front meaty upside down suspension and rear monoshock.

The braking duty is been done by the petal disc brakes at both the ends, though the bike is devoid of ABS but the company has claimed that there will be models available featured with ABS within five to six months from now. DSK Benelli also mentioned that they are in the making of their own ABS and soon they will be featuring that ABS on their current lineup.

The Benelli TNT 25 is available in two variants depending on the tyres featured on the bike- the variant with MRF tyres is priced at Rs 1.68 lacs whereas the model with Metzeler tyres is priced at Rs 1.75 lacs (both Ex-Showroom, Delhi). The Benelli TNT 25 is featured in three different decals and the company will not hike the price for the entire one year.