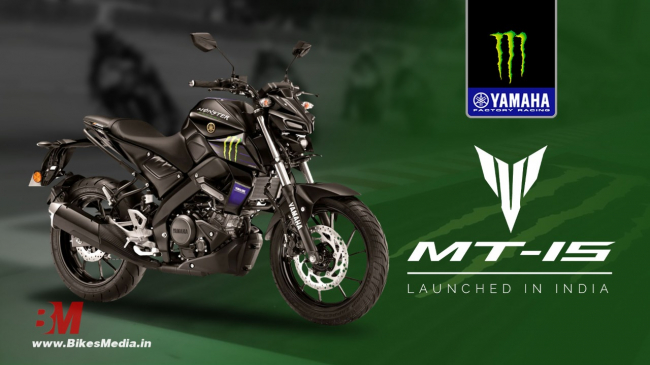 The Japanese bike maker YAMAHA has launched the new Edition- Monster Energy MotoGP edition of the MT-15 in India. The price has been marked at Rs 1,47,900 (ex-showroom, Delhi) which makes it Rs 2,000 more expensive than the already-available special edition trim of the bike.

The changes are only limited to the styling front with a subtle MotoGP cosmetic stickering treatment being on offer. Its entire body work is in a black paint design. The attractive part is the Monster Energy branding on the fuel tank and logo on tank extensions.

Talking about its technical specs, its equipped with a 155cc, liquid-cooled, single cylinder engine that produces 18.23bhp of power and 13.9Nm of peak torque. The transmission system comprises a six-speed gearbox.

The MT 15 includes a negative LCD console, a side stand engine cut off switch, a single channel ABS setup, assist and slipper clutch, an LED headlamp, and an LED tail lamp. With a small fuel tank of 10-litre, the motorcycle tips the scales at 138kg. It rides on 17-inch wheels at both ends with telescopic forks and a monoshock.

We have already tested its earlier versions in Indian Roads which has performed very well. Now we need to check out the craze of Indian Bikers Audience about the new Avatar of Cosmetics in MT-15.