How Rake/Caster Angle Defines A Motorcycle?

Often mentioned in main stats, looking at a new motorcycle spec sheet, but what do motorcycle Rake Angle actually mean and why would we need to know this? First, Rake (also called Caster) is the angle of a motorcycle’s steering head of frame. In the simplest terms, Rake and Trail are the major force in determining the steering and handling characteristics of our motorcycles. Rake might best be described as the steering component that makes a motorcycle directionally stable, while Trail can be thought of as the component that restores stability when it is disturbed. 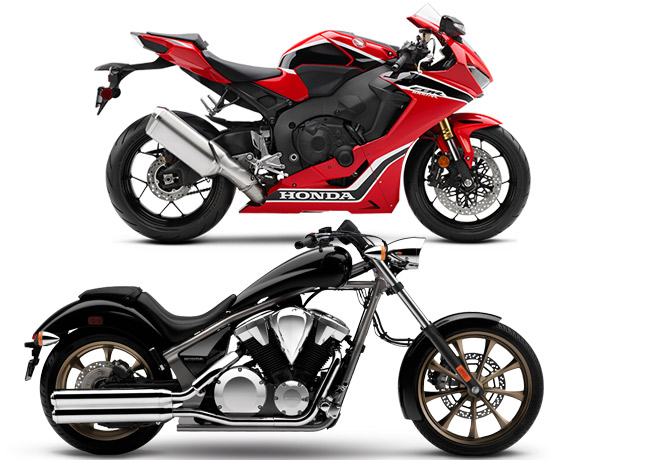 Imagine a motorcycle with 0 degree of rake, with the forks straight up and down, perpendicular to the ground. Ride something like much over walking speed and you will be facing your face to the ground. Now consider the other extreme, forks kicked out like those old school choppers. These bikes were stable at higher speeds but requires comparatively high amount to force to make a U-turn. 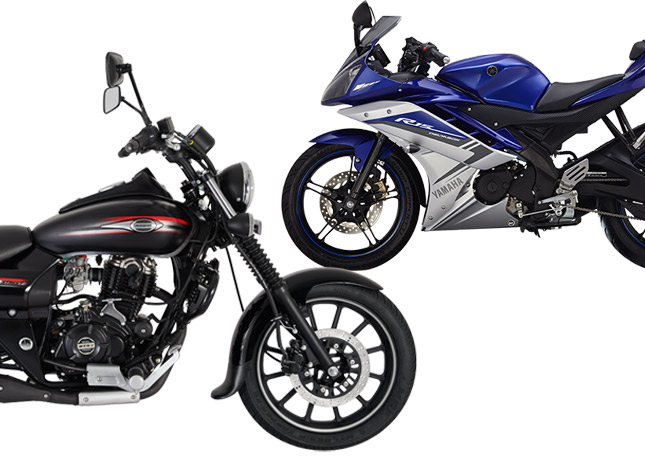 To better understand this, let us take Yamaha R15 and Bajaj Avenger, as both motorcycles are from distinctly different categories, they have their own characteristics. Let us get into the comparison, Yamaha R15 has a rake angle: 26°, as we all know, Yamaha R15 offers excellent cornering capabilities and it is very flickable, but does not offer a straight-line stability. Coming to Bajaj Avenger, it has a major difference in its rake angle compared to Yamaha R15, this is influenced by the good high-speed stability of the Avenger, but making a U-turn requires a high steering effort. 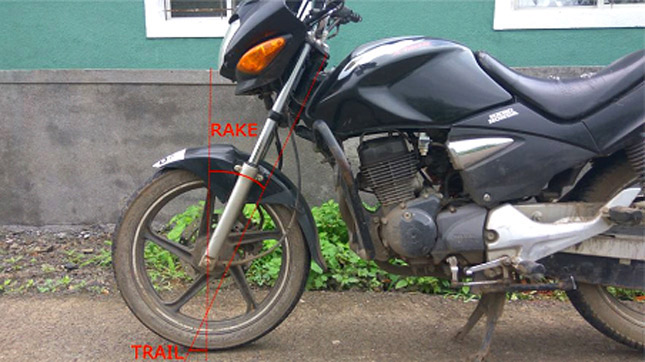 Ever seen a shopping trolley? There is a great lesson on motorcycle geometry hidden in those trolleys. The small distance between a straight-line drawn through the center of the headstock axis. The greater the trail distance the greater the straight-line stability will be, but the harder it is to make the bike corner.

As a general rule, as Rake increases so does Trail, but there are times when more or less of either is desirable for a given application, and though we’ll come back to this, I’ll point out now that as far as Rake and Trail goes, there are no hard and fast rules as to what dimensions work best for any given situation.

What else affects Rake and Trail? 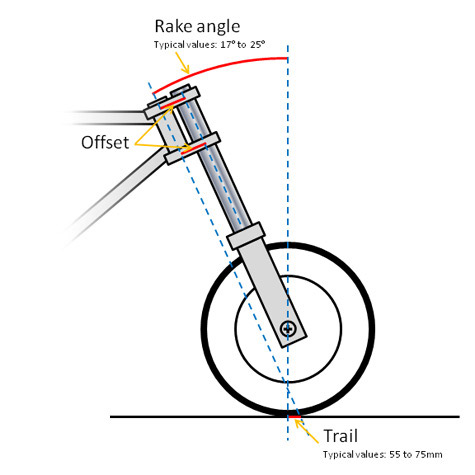 In short, anything that affects the way the bike sits in relation to the road. For instance, installing larger diameter motorcycle tires at both ends of the bike adds Trail because raising the bike, even slightly, increases the angle between the steering head and the road. This adds Rake, which increases Trail.

Installing a larger front tire or wheel will cause an even larger change because as the front of the bike raises in relation to the rear a proportionally larger increase in the Rake angle occurs. This is a particularly important factor to be aware of when you are adding aftermarket wheels to your motorcycle.

To decrease Rake, which also decreases Trail, you can install a smaller diameter tire, or slide the fork tubes up in their clamps giving them a steeper angle. Back in the good old days, this was a trick many racers used to make their bikes turn quicker. This effect could also be attained by installing longer rear shocks. We people must have seen Yamaha RX100 and 135 owners installing a 16 in rear wheel in their motorcycles along with longer shocks.

To achieve stability at speed, balance, and lightness of steering effort, a compromise between Rake and Trail is engineered into the chassis. For example, although those raked forks might give excellent high-speed stability, they are impractical for normal use. To maintain good stability and proper handling with the fork angle being in the normal range (from about 22 degrees to about 32 degrees), a certain amount of Trail is designed in.

Again, there are exceptions—the more trail a motorcycle has, the more stable it is. However, on increasing the Trail too much, we are back to chopper-like handling. Conversely, too little Trail and the motorcycle’s stability begins to be adversely affected.

Although the principles behind Rake and Trail are well understood and easy to generalize, there are no hard, fast rules concerning what the right Rake and Trail dimensions are for a particular bike. Engineers spend countless hours experimenting with steering geometry and even then do not always get it right, in which case any fine-tuning is left to the rider. Similarly, if you understand how Rake and Trail interact and how each affect the motorcycles’ handling, then picking the right bike or performance modifications for your type of riding becomes that much easier as does amending any shortcomings in its handling.