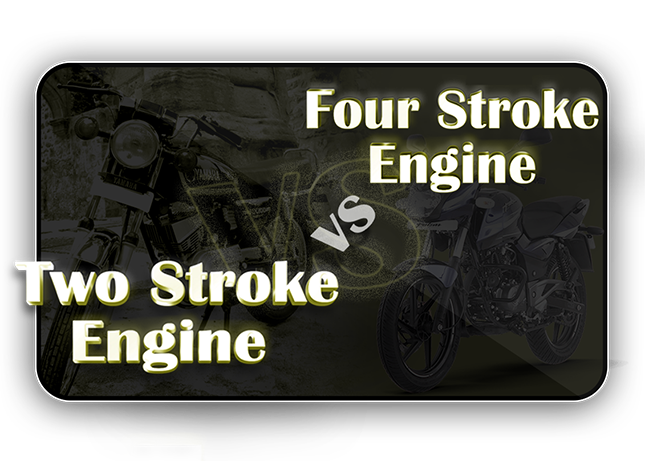 Do you remember the old motorcycles which used to putter around and make that rowdy sound that made bikers seem like bad boys? That happens only in thumpers now since motorcycle engines have evolved substantially over the years. Those quick accelerating fast machines have been replaced by silent, smooth and sophisticated machines which have lives as long your pet dog, or maybe more. But do you know what is the difference between those two engines? It is the strokes in their hearts. Those old two stroke beauties were really something! Let’s get to know the difference between the two kinds of engines.

What is a Two Stroke Engine?

What is a Four Stroke Engine?

A four stroke engine is similar, except to complete one cycle, the piston has to go through four strokes. One being the intake stroke, second being the combustion stroke for power generation, third the exhaust valve opening stroke, and fourth being the exhaust stroke to remove the combusted gases.

Which One is Better?

On the onset, it does seem like the two stroke engine looks more powerful with each alternate stroke being a power stroke, whereas in a four stroke engine the power stroke comes every 4th stroke. It is true to some extent, but today’s engines are much more sophisticated and developed that with the four stroke technology, engines can produce the same or even more power with the same cubic capacity.

Yet, from a pure power generation point of view, two stroke engines are better since they produce more power in each stroke and hence help in the initial acceleration of the bike. But they have their limitations. Four stroke bikes on the other hand have less power generation capacity, but they are able to produce enough power in the power stroke to keep the piston moving and completing three more strokes with the same intensity.

Moreover, from an efficiency point of view, two stroke engines are less efficient since they burn more fuel for the same amount of stroke as a four stroke engine. Moreover, they do not have an external lubrication capability and the engine oil needs to be mixed along with the fuel and is burnt during the combustion. This further adds to the polluting capacity of the engine.

Read Also: Why 2-Stroke Engines Are More Prone To Seize?