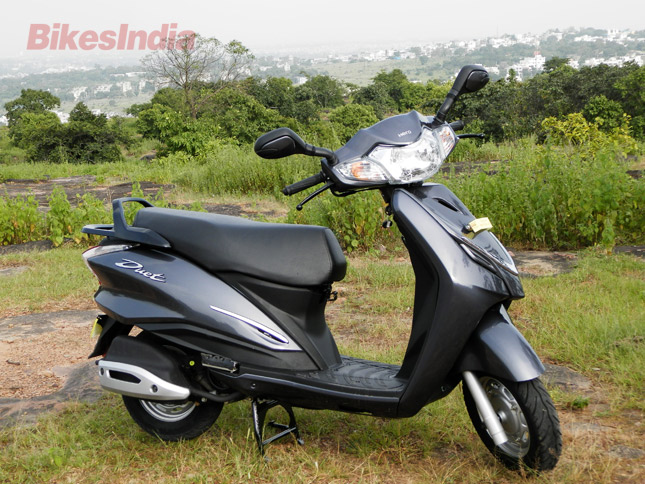 Ever since parting their ways both Hero and Honda are going neck n neck be it the sales figure or new product launches. However, Hero MotoCorp had to strive harder than its Japanese counterpart because of numerous reasons. The Indian two-wheeler company had undergone lots of tie ups with many international automobile companies, some went successful some didn’t turn out as it was expected. The acquisition of American Motorcycle Company “Erik Buell Racing” was one of them, with the help of EBR Hero had done many experiments, however, nothing proved beneficial for the company.

For Hero MotoCorp, developing new breed of products were equally important as developing their own engines, in a slew of this Hero has developed a brand new 110cc CVT engine which they have plonked on two of their latest scooters. The Hero Duet is one of those two scooters, which we are going to review today. Let’s find out how Hero has taken the advantage of their age old experience with Japanese giant.
Review By: Sharjeel Khan
Text By: Farhan Kashif
Photographs By: Haroon Mohd. Khan
Scooter Tested: Hero Duet VX
Price: Rs. 49,250 (Ex-showroom, Delhi)
Design & Style 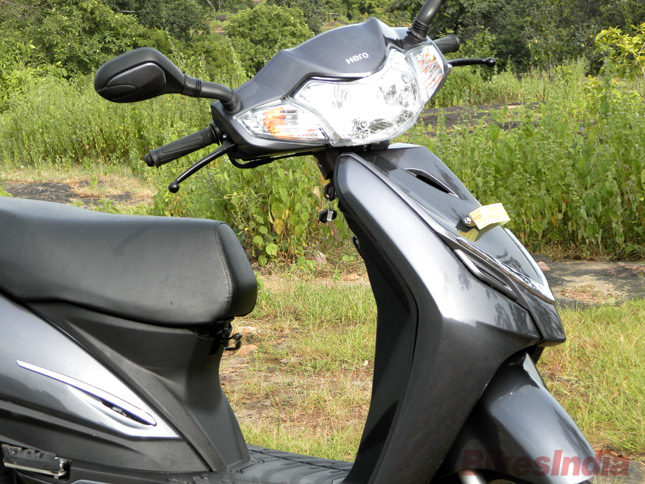 Hero has gone the conventional way as far as design element of the Duet is concerned, opposite to the radical design of their other scooter Maestro Edge, the Duet seems heavily inspired by Honda Activa. At least from the front fascia the Duet looks strikingly similar to Activa, however, the rear end of the Duet is neatly designed and it looks refreshing. 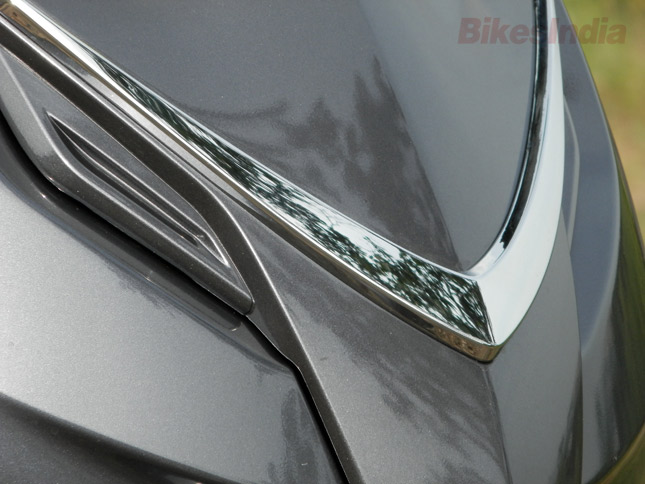 You look at the Duet and it is a no nonsense scooter from every bit of it, sober yet stylish it will attract the matured market almost instantly. There is use of chrome everywhere, the front of the scooter is garnered by a V shaped chrome striping, whereas, there are chrome on the side panels of the Duet as well. There is LED taillight featured on the rear of the Duet along with wraparound blinkers. Aluminum finished heat shield is also featured on the exhaust, which adds to the aesthetics of the scooter. 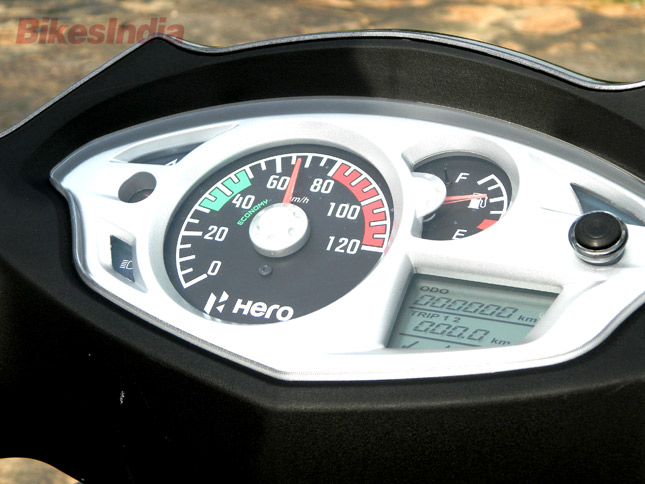 The new Hero Duet is featured with dual meter console, part digital and part analog. There is big analog speedometer sits at the center of the console, whereas, small digital meter is also given featured with Odometer and two trip meters. All the information can easily be extracted both in day and night conditions. Apart from these info, there are side stand indicator along with other tell tale lights also given on the dashboard.

As far as switchgear are concerned, the Duet shares all the electrical and switches with the Maestro Edge, and they are of just passable quality. The plastic quality used on the Duet is okay and they are neither great nor bad at all. Hero has apparently used all the intel of their competitors and therefore avoided those things that were not appreciated on their rival products but have incorporated all the good things in term of features to make the Duet a great package.

If we talk about the features of the Hero Duet, the first and foremost thing is its metal body, the Duet comes in metal body and when we call it so, we actually mean, the side panels, front fender and body line of the Duet is made up of metal. In contrast to the Maestro Edge, which is all fiber scooter like any other in its segment the Duet goes on TVS Jupiter path. Durability factor is the one which comes to our mind when we talk about metal body, but metal means weight and the weight of any sort be it pillion/rider’s weight or the laden of the scooter itself it actually inversely proportional to both performance and efficiency. But surprisingly in case of Duet in spite of its metal body we neither experienced lack of performance nor any sort of drop in fuel efficiency. 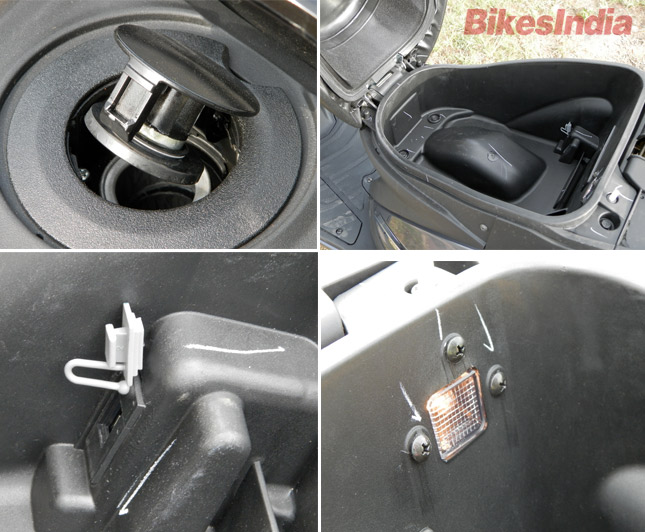 The fuel cap is externally situated right above the taillight and it is along with the seat are remotely operable by single key, the provision of opening the fuel cap and seat is given on the same steering lock. Therefore one needs not to descend from the scooter while refilling the fuel at the filling station. The storage capacity under the seat of Hero Duet is adequate for a full face helmet. On the top of the line variant of Duet, you will also get under seat USB charger along with LED light. 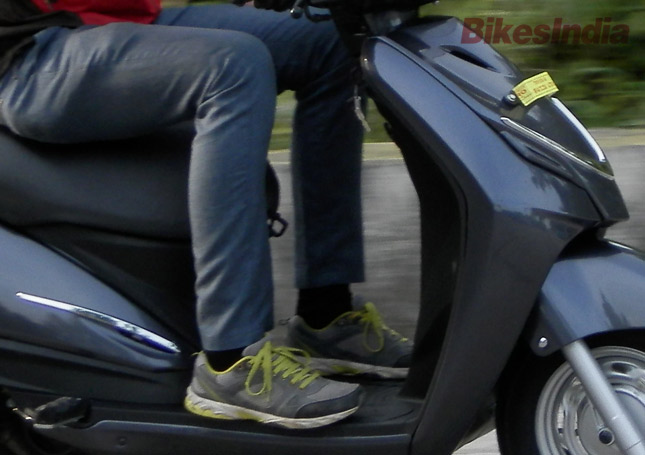 The Hero Duet is a very comfortable and balanced scooter; the overall seat height of the scooter is just perfect for the average height people of both the sexes. The seat is comfortable and the ride is plush on the new Duet. There is no doubt about the added comfort which has brought in by the front telescopic suspensions. We have taken the Duet off road and it soaked up all the bumps pretty impressively, both soft seat and efficient suspension setup made the ride comfortable.

There is ample of room for both the feet and knees, the footboard is wide enough that a six feet rider can easily accommodate his feet. There is no way the knees can touch the front panel or the handlebar on the go or while hard braking. The retractable rear foot pegs featured on the Duet is placed pretty well and they get easily tucked inside the body when not in use. 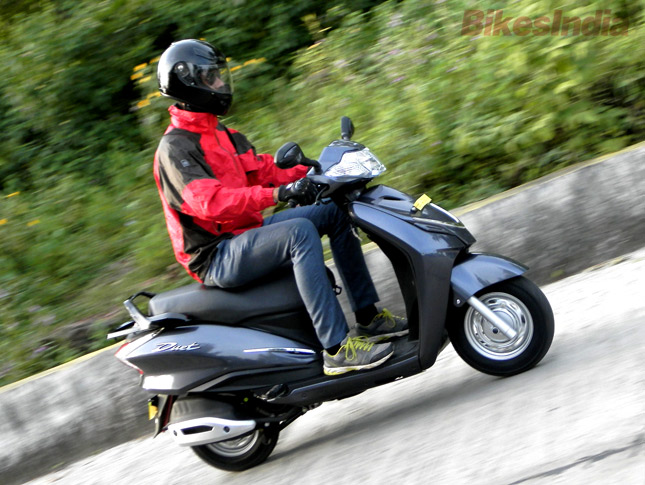 The Duet is equipped with new 110cc CVT engine that Hero has developed indigenously at their Indian facility. The same engine they have first slapped on Maestro Edge, the mill is powerful and the torque is evenly distributed at all rev range. The smooth and refined nature of the new engine reminds the prowess of Honda which Hero seemingly taken successfully. When we had done the review of Hero Maestro Edge, we pointed out a turbine like whistling sound coming from the engine is now not present in the Duet’s engine.

The acceleration is good on Duet and the weight of the scooter doesn’t come between the performance and the fuel efficiency. When we pulled the Duet on a straight stretch we could manage to hit 80 Km/h speed effortlessly without pillion and with lots of juice still left on the throttle. The body balance of the Duet is what impresses us the most, even on bad roads it never went out of control. 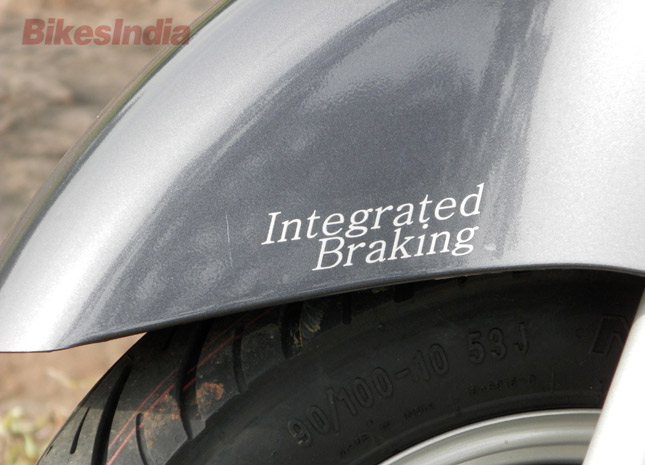 The Hero Duet comes shod with 10 inch MRF Zapper Tubeless tyres, they perform pretty well under almost all sorts of conditions and we could manage to lean over on steep curves with confidence. There is Integrated Braking System featured on the Duet which the company has borrowed from their erstwhile partner Honda. Honda is using the same technology in their products by the name “Combined Braking System or CBS”. The system helps in effective braking as while applying only one brake the other gets automatically actuated and eventually resulting into combined braking. The bite of the brakes at the Duet was just adequate and we could manage to take the scooter to the halt with confidence. There are 130mm drum brakes present on the Duet and so far there is no option for front disc brake is been offered by the company. 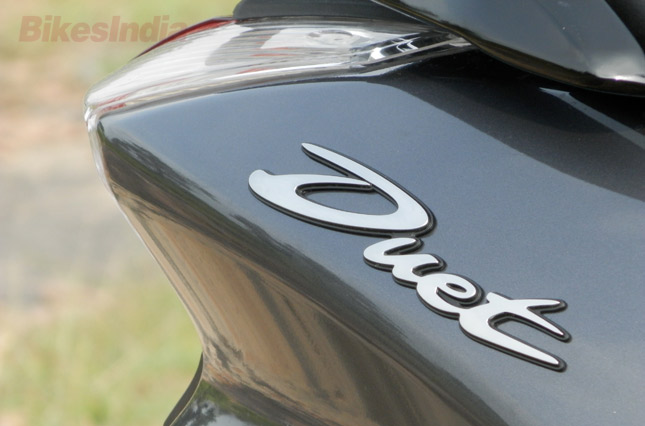 As mentioned earlier also, the Hero Duet is a no nonsense scooter and can be taken home as a family scooter. The conventional styling of the Duet makes it a family commute and it can be used by both genders. It’s all metal body reassured the durability and the features like USB charging, dual meter console, tubeless tyres, front telescopic suspensions and great under seat capacity makes it one of the strong contenders in its segment. 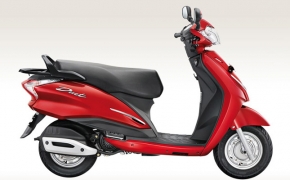