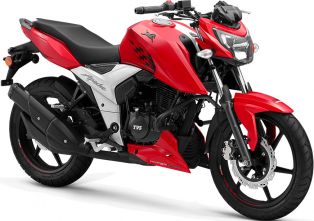 Tweet
Specs Compare Reviews News
TVS Apache RTR 160 4V is another motorcycle from the house of TVS Motor Company which is inspired by the 'Draken' design. The bike has taken its design cues from the elder sibling- Apache RTR 200 4V. Apart from the single seat that comes with new RTR 160 everything remains same as far as design is concern, it is hard to differentiate between the two bikes. The 4 valve oil cooled engine of the new Apache RTR 160 4V churns out good 16.5 horses making it the most powerful bike in its segment. The new TVS Apache RTR 160 4V also comes in three different variants- Carburated and with front disc brake, Carburated with front and rear disc brake and Fuel Injected with front and rear disc brake options.

This is the 3rd launch from TVS in just a span of 3 months. Needless to say, TVS is on a roll. With the launch of Apache RTR 160 4V it proves that TVS is committed to providing race spec motorcycles to the masses. I say race spec because this motorcycle is a massive improvement from the last one in terms of looks, performance and value for money. According to the TVS, this bike is inspired by the RTR 165 prototype which won the INMRC championship six times. Just like the RTR 200 4V, this bike too is based on the Drakena concept. So let’s dive in deep and analyze what this bike has on offer. 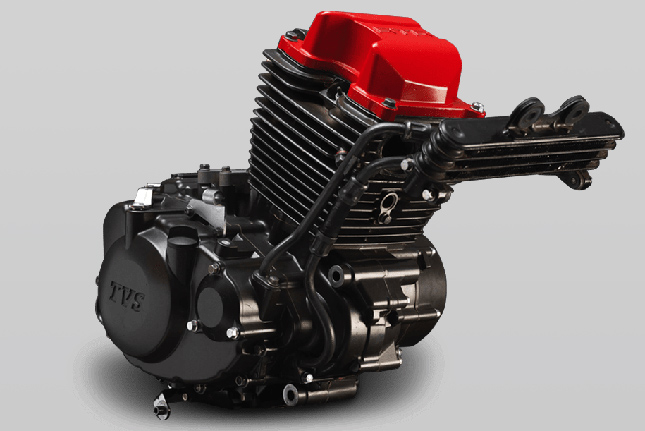 The engine is a 159.7 cc oil cooled single cylinder 4 valve motor which churns out a maximum power of 16.5 PS @8000 RPM and 14.8 NM @6500 RPM. While its elder cousin the RR310 gets a DOHC set up, this one is using a SOHC unit. TVS has used their patented Oil-Cooled Combustion Chamber (O3C) with Ram Air Assist to reduce the engine heat by 10 degrees. Company’s officials have claimed that this engine will run smoother and rev higher than previous generation Apache RTR 160.

Carburated and Fuel-injected, both versions of the motorcycle are available. The Fuel injection is a closed loop system controlled by a 16 Bit Microprocessor. The FI unit also has a lambda sensor and temperature sensor embedded in it. In short, the Fueling will remain precise throughout the rev range and in all the conditions. 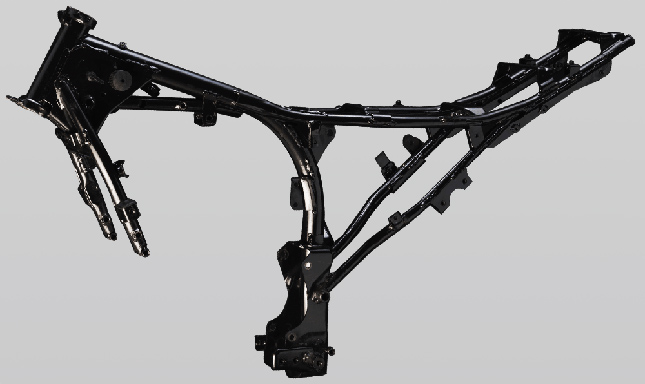 The motorcycle houses a Double cradle synchro stiff chassis with 58% more lateral stiffness and 22% more torsional stiffness. This increases the overall stability of the bike by 25%. The chassis is balanced by race tuned SHOWA suspension from Japan, both at the front and back. The bike also has lowest in class coefficient of down force 0.416 lift-force (lift-force is opposite to down-force, but it serves as its unit). 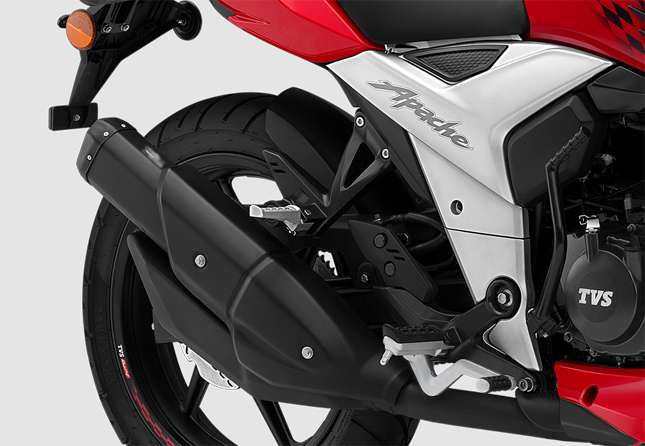 In an impressive upgrade, TVS has finally supplied the Apache RTR 160 with a 130/70 rear section tyre. This will massively improve the handling and styling of the bike. Front tyre is the same 90/90 size. Petal discs are present both at the front and the rear and just like the last time there is an optional rear disc available. 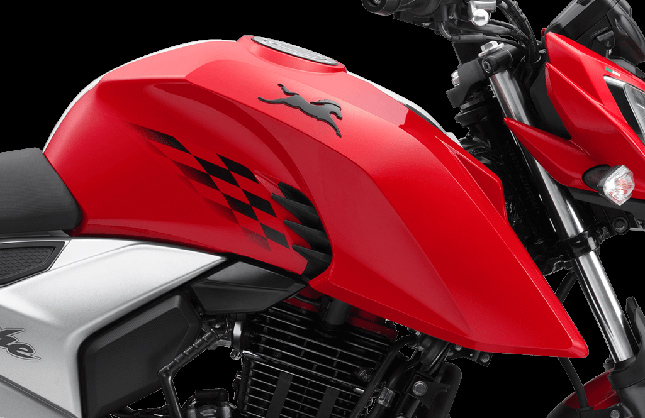 There are subtle changes in the body of the bike to keep it different from RTR 200. The tail section looks simple while the one on RTR 200 4V has plastic vents on the sides. There is a single seat setup instead of the split seats. The body graphics and dual paint schemes also differentiate this bike from its elder sibling. The handlebar is a single piece unit instead of a 2-piece clip-on. 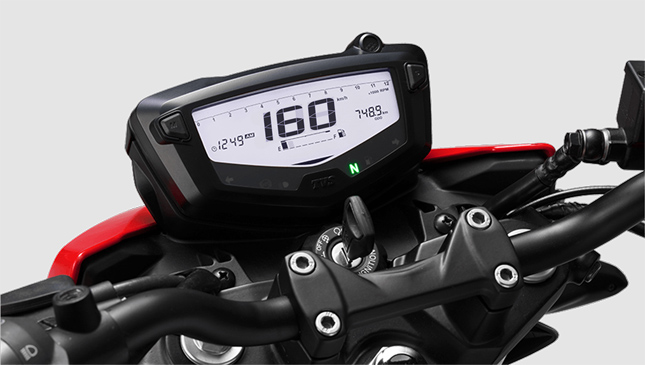 The instrument cluster remains the same as on Apache RTR 200 with readouts including 0-60 time, gear shift indicator, lap time recorder etc. The front of the bike carries the same headlight as it’s bigger sibling and so does the tail light. The tank holds TVS 3D logo and chequered flag on its side to justify company’s history with motorcycle racing. The console backlit is of
white colour for the Fi variant and orange colour for the carb variant. 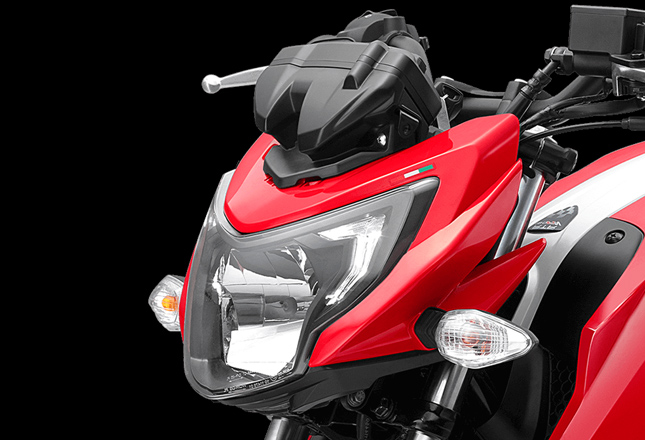 The Apache RTR 160 4v though carries its style cues from the RTR 200 4v but it still is a new bike in its own right. TVS has tested this model for over 30,000 laps on a race track and in different terrain conditions as well. The chassis carried chosen from the RTR 200 4V will prove a big boon for the RTR 160 4V in terms of handling and highway stability, areas in which it previously had a shorthand. Furthermore the choice of Fi and carb variant at the launch is a fresh of breath air from TVS, who waited a whole year to launch the Fi variant of the RTR 200. In short TVS RTR 160 4v has enough similar components to relate it to Apache RTR 200 4v but not enough to mistake it for one. For a price of Rs 81,490 (ex-showroom), the Apache RTR 160 4v definitely looks like a steal.

Apr 13, 2018
With the RTR family already consisting of so many members, does it makes sense to bring out a 180 4v model? Let’s compare RTR 160 4v and RTR 180 to see how much different of the on-road performance do these guys translate.
View All 6 TVS Apache RTR 160 4V Reviews 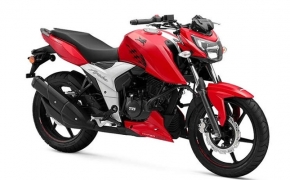 Gone are the days when the Apache was always under the shadow of Pulsar. Since... 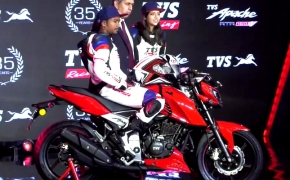 TVS Motor Company has launched the all new Apache RTR 160 4V, the bike has...