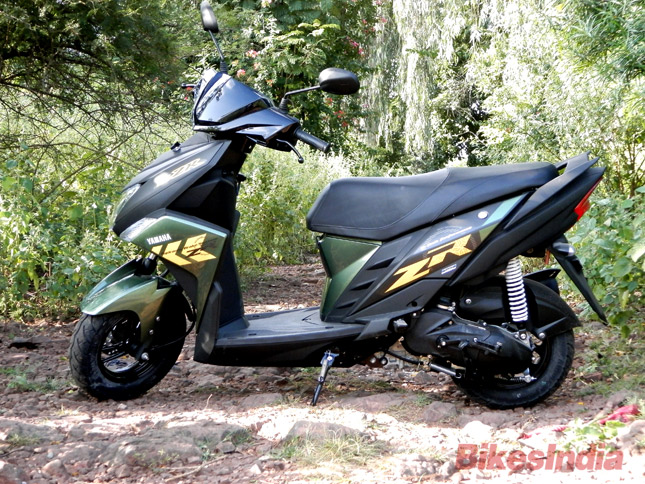 Yamaha had introduced male targeted scooter long ago by launching their “Ray” differentiating the current line up from the existing unisex scooter models like “Alpha”. It is recently the company has launched the updated version of “Ray” as Ray-ZR. The new Cygnus Ray-ZR is entirely redesigned by the Japanese and has been introduced to the Indian market with a bold tagline- “Real Boy’s Scooter”. Today we are going to bring you the road test review of the latest offering from the house of Yamaha, let’s find out how Ray-ZR performs in real world scenario.
Scooter Tested: Yamaha Ray-ZR
Test Ride: Sharjeel Khan
Review By: Farhan Kashif
Photographs By: Haroon Mohd. Khan 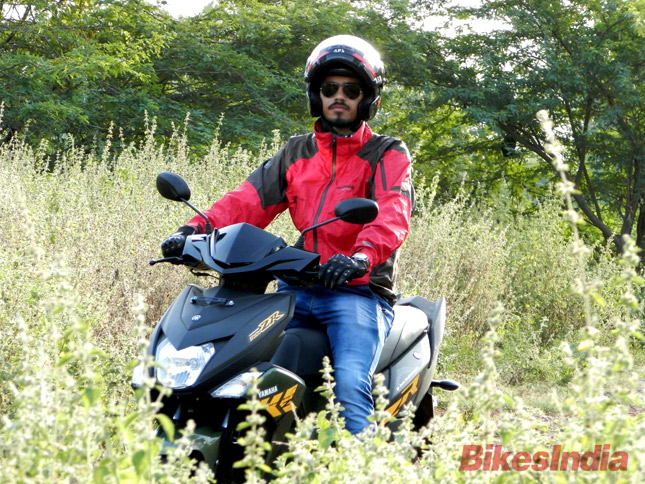 Rider’s Note: The acceleration reminds you almost instantly that you are riding a YAMAHA. Being an auto-scooter equipped with 113cc CVT engine, it impresses you from the very beginning of the ride. 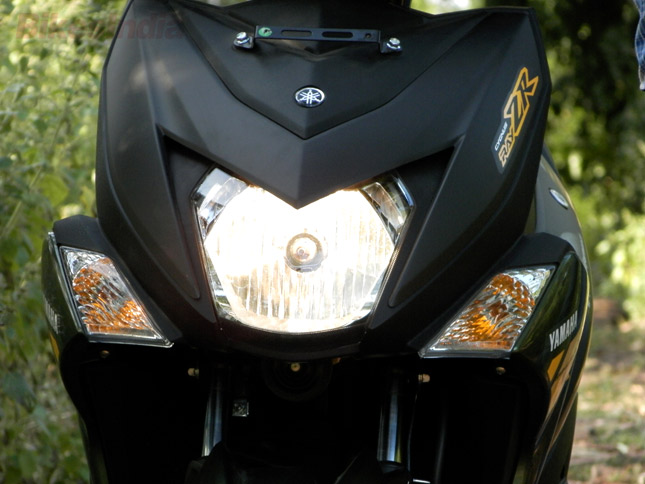 Yamaha has entirely redesigned the scooter and from the front fascia it looks extremely attractive, the bold and angular headlamp is now sits right at the center of the front body. Whereas the front blinkers are all wraparound type. Overall, when you look at the Ray-ZR from every angle it appears stylish and different; you will notice lines and creases everywhere. 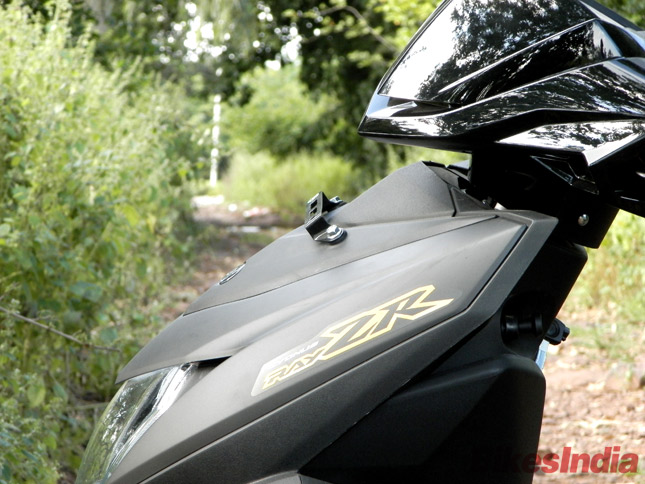 Especially from front the fairing look-alike body seems attractive, the front design though looks strikingly similar to Honda Dio but with inclusion of front telescopic shock absorbers the Ray-ZR looks more complete. The angular lines continue from front to the rear, including wide aluminum grab rail, that comes in bat wing like design. The tail lamp assembly is also complementing to the angular design philosophy of Yamaha, but unfortunately it doesn’t come with LED, instead Yamaha chose to go with conventional filament bulb. 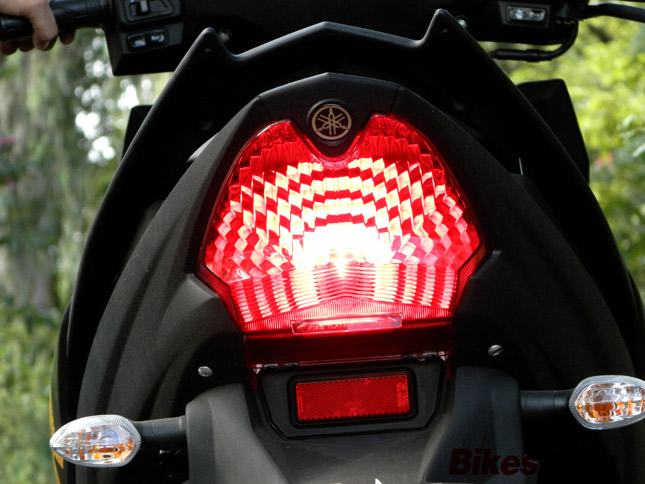 The new Yamaha Ray-ZR comes featured with all analog meter console, which despite of its old fashioned approach looks both stylish and practical. There are angles everywhere, tell tale lights are divided by divisions made on board, whereas the fuel gauge is given on the top of the console. 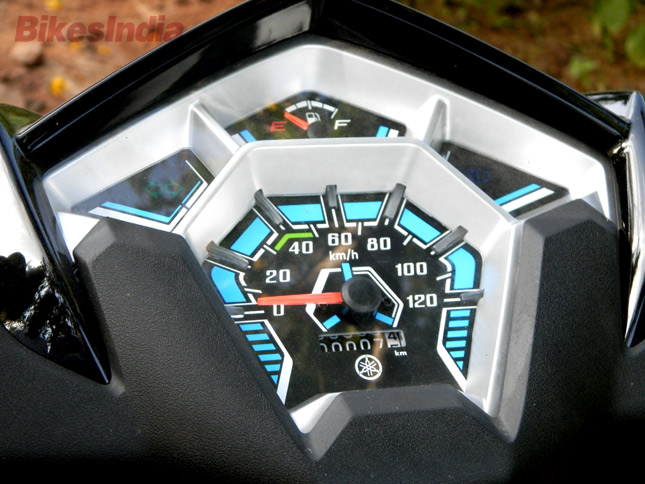 The switchgear and plastic quality used on the Yamaha Ray-ZR are top notch and there is virtually nothing to complain about. Although, feature like Pass switch is badly missing, Yamaha has included Honda like “Key Shutter Lock”. The seat opens in a conventional way and there has been a seat lock given on the side panel of the body to operate. 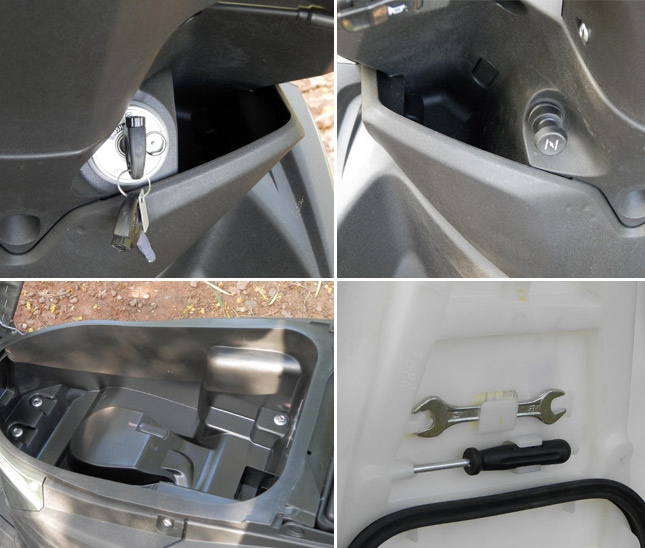 The rear view mirrors are also very basic in nature, there is nothing special treatment given to them whatsoever. However, despite of its basic nature the Rear View Mirrors are functional and they do exactly what they are meant to do. There is no rattling of the mirrors seen; hence having a rear view of the ride is a delight. 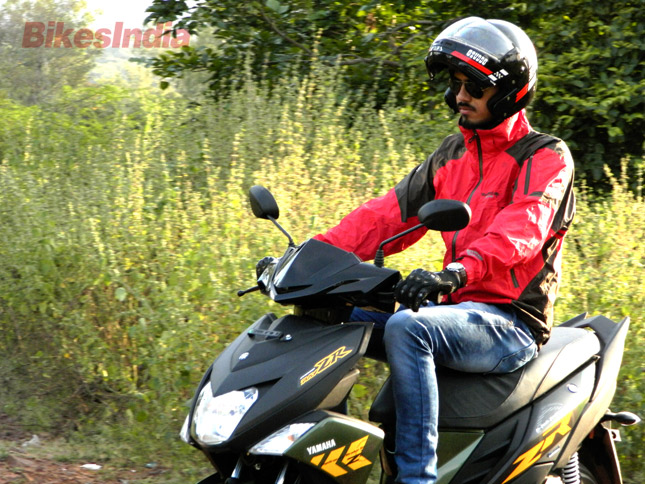 As all other Yamaha products the Ray-ZR is also a tad smaller, however, it’s a good thing for those of small height but being a male oriented scooter it should have been a little bigger suiting to the average Indian male height. One practical reason behind the low profile of the Yamaha Ray-ZR is its 10 inch wheels; Yamaha could have easily given a front 11 inch wheel with alloy and disc brake option, making it a little higher from the ground like other competitors are already doing. However, instead of following the regular custom Yamaha chose to continue with the 10 inch wheels even with alloy and front disc brakes, reducing the size of disc brake to 170mm (smallest front disc brake given on any brand). 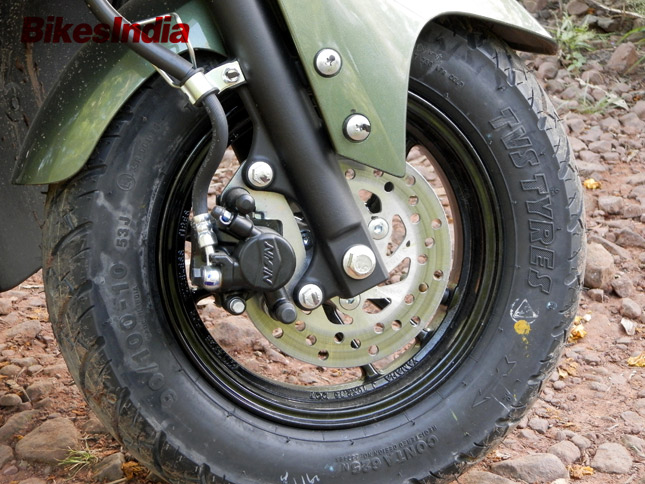 The smaller profile tyres directly affect both ground clearance and the handling of the scooter. Due to lower ground clearance owing to the 10 inch tyres, riding the ZR on bigger obstacles or on rough terrains is difficult. One more thing that we noticed while riding the Ray-ZR, despite of front telescopic shock absorbers the ride on ZR is not that confident as it should be, in my opinion a little beefier front shock absorbers might have been done the trick.

The seat on the Ray-ZR is soft and yet comfortable, there is patterned design given on the seat for rider, this helps in providing grip and also acts as anti-slip. The foot board is broad and flat, sufficient for even taller riders to foothold. The rear foot pegs are also ergonomically designed and they are placed perfectly for the pillion, however, they could have been tucked more neatly inside the panels. 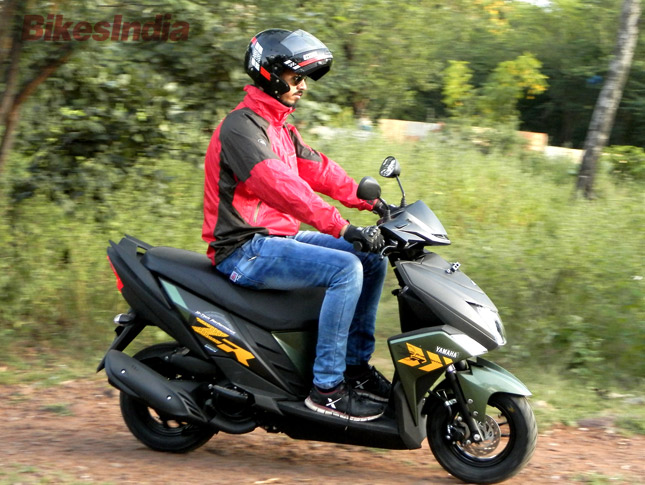 You either thumb start or kick start the engine, it comes to the life pretty smoothly, however, to kick start the scooter you need to put it on the center stand first. The Yamaha Ray ZR is equipped with same 113cc engine with CVT transmission which we have already seen on other scooters in the Yamaha’s fleet. Yamaha has boasted “Blue Core” technology on the 113cc mill of Ray-ZR, making it a frugal machine, the company claims 66 kmpl of fuel efficiency, which means in real world scenario you can expect mileage of 50+ Kmpl.

The Ray-ZR displays good initial acceleration and it also exhibits ample of torque at early and mid range, making it easy to ride in city conditions. However, apart from the initial grunt there is barely any difference that could set the Ray-ZR apart from its rest of the competitors. 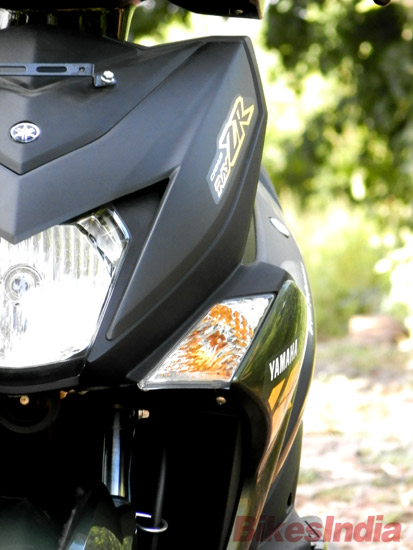 The comparatively smaller profile of the Yamaha Ray-ZR makes it easier to flip flop on the roads, that actually makes it fun riding in urban riding conditions. The scooter we got as a test ride unit was top variant and it was equipped with alloy wheels & front disc brakes. However, it was the “Nissin” 170mm front disc brake that gave us a confidence while hard braking otherwise the rear drum brakes were not that impressive.

The scooter we rode was shod with TVS Tyres and to our surprise they behaved quite well especially while riding off road and on gravel filled roads. Yamaha has now featured all of their scooters with tybeless tyres and the Ray-ZR is not an exception either, the Ray ZR comes equipped with tubeless tyres as standard fitment on both of its variants including Drum and Disc brake versions. 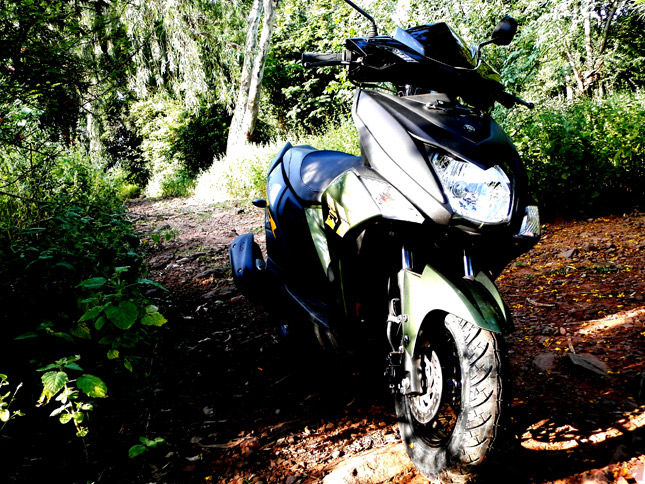 At a price tag of Rs 54,500 for top variant and Rs 52,000 for drum brake variant (both prices are Ex-Showroom, Delhi) the Yamaha Ray-ZR is a stylish scooter for youngsters, especially college going youth. However, when we talk about features that are available on the scooters in the same segment, the Ray-ZR lags substantially behind them. Features like Digital meter console, LED lights, USB charger and Remote key for seat & fuel cap are few to name that have becoming a common sight on scooters across the segments are badly missing on the Yamaha Ray-ZR. 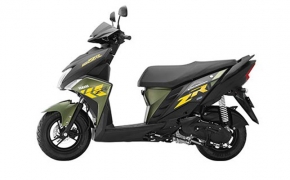 May 15, 2016
Yamaha has brought the updated model of their “Ray” series auto gear scooter; they have christened it Ray-ZR. The scooter is still focused on the male targeted audience and the company has used tagline “Real Boy’s Scooter” for the new Ray-ZR. It seems a good effort to tap the market which is still not been dominated by any of the competitors present in the country. Let’s find out what’s on the offering from the new entrant.

Nov 18, 2017
All new Honda Grazia has got really cool and astonishing looks. The very first look of the scooter somehow reminds us of Honda Dio from the front and the rear end. Actually the whole scooter looks like Honda Activa has worked out, took heavy diet and transformed. Beautiful fine lines and bulky yet aerodynamic front of Grazia mesmerizes the soul.
View all reviews of Scooters