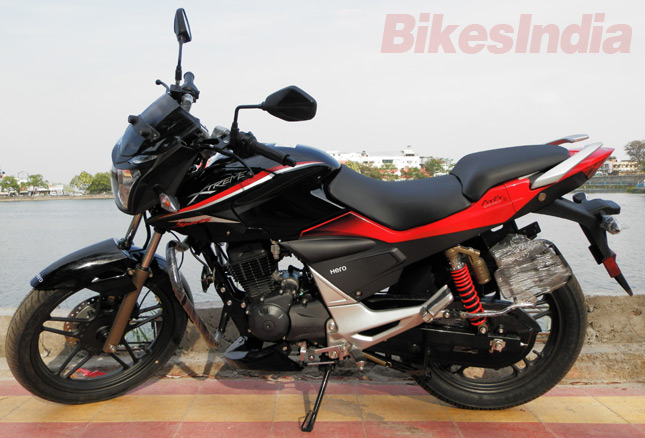 The Xtreme Sports from the house of Hero MotoCorp is perhaps the only 150cc bike that we have not been tested yet to pitch it against the other motorcycles from the same category offered by competitors. Motorcycles like Suzuki Gixxer, Yamaha FZ V2.0 and Honda Unicorn 160 are blazing like guns, making the segment more competitive and lucrative for the end user.


Hero has also updated their 150cc Xtreme as "Xtreme Sports", the bike is carrying the legacy of "CBZ" that used to be an iconic 4- stroke performance motorcycle launched when everybody was praising the 2-stroke motorbikes. The only name sake is sufficient to put the Xtreme Sports into a test as the level of expectation is a little higher with a most powerful motorcycle amongst the rest of the brigade (at least on paper). 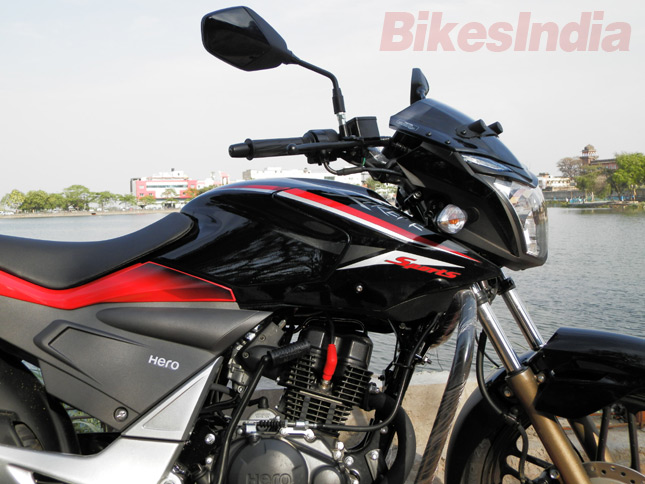 The Xtreme Sports is definitely better looking than its previous model, the bike has bold stance and it looks also good in dual tone color. The big and bold headlight complements the rest of the body, it is also featured with high raised windscreen mated to the Drls. The fuel tank has protruded scoops carry forwarding the sharp lines of the design. Now the single seat is been replaced by a split seat and the split grab rails are now come in silver color. The under belly pan comes in body color and it looks more cosmetic rather than practical as it is made up of plastic, but aesthetically it goes well with the over all design. 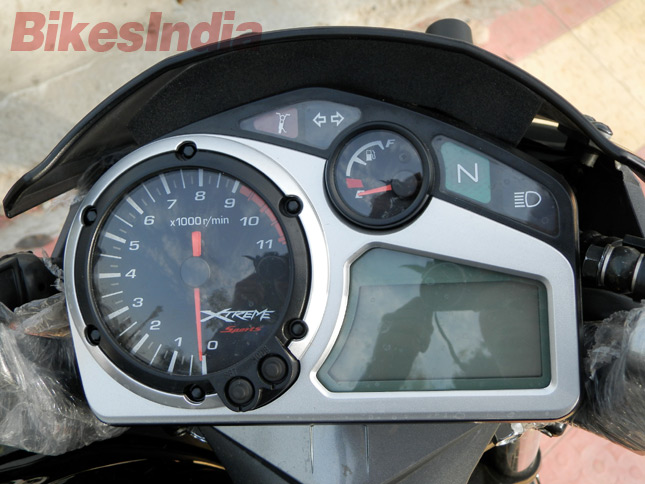 The instrument console is good looking and comes in silver trim, the meter console is consists of both digital and analog display. There is a bold tachometer alongside digital display with trip meter and speedometer. There is also a side stand indicator with neutral indicator, blinker indicator and high beam indicator prominently placed right on the dash board. 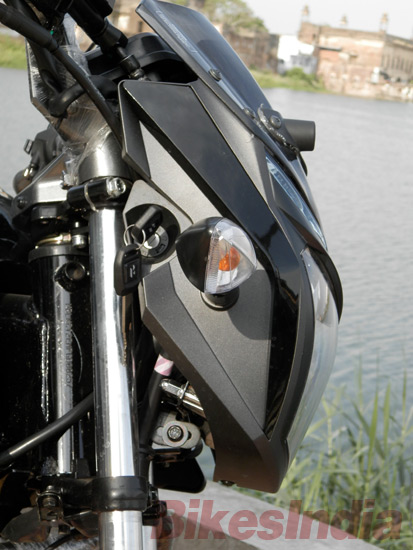 As far as switchgears are concerned they are direct lift from the older Xtreme, there is no provision of Engine Kill Switch given. The ignition switch is also awkwardly placed at the side of the headlight but thoughtfully it is also used as handle lock, although after using the ignition switch for a while it started looking comfortable and reminds me the car's ignition switch. 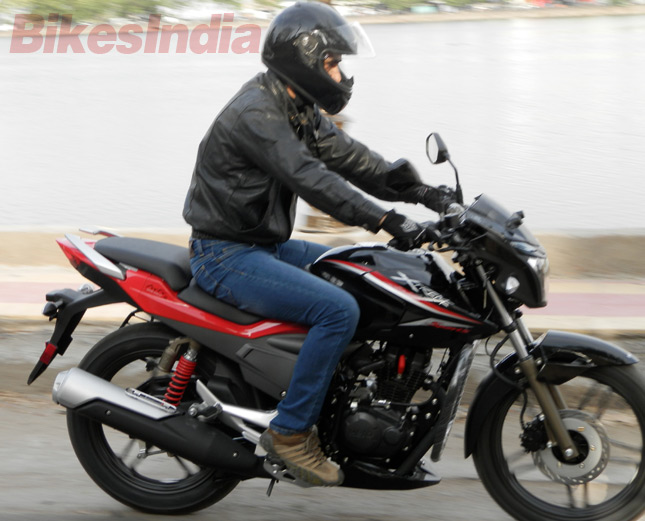 The Hero Xtreme Sports is featured with fairly high raised clip-ons, this is also a direct lift from the Xtreme including the comfortable hand grips with weight balancer on the extreme ends. The split seat is also comfortable with lots of space, specially for the rider. There is ample of space for the rider to shift his position to find out the best riding position. 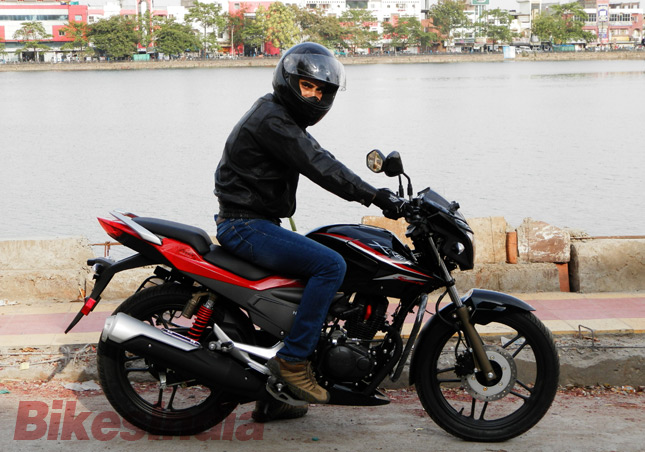 However, because of the rear set foot pegs I found it little difficult to find a straight riding posture, when I sit closer to the tank to reach out the handle bars without putting weight on my wrists, my legs are tend to bend more backwards making it more difficult to ride sitting straight. On the other hand when I tried to straighten my legs and slip a little backwards on the seat the handle bar becomes difficult to reach and I had to bend down to reach them. Ultimately, I found the ideal riding position and it was in between and a little leaned, justifying its name- Xtreme Sports. 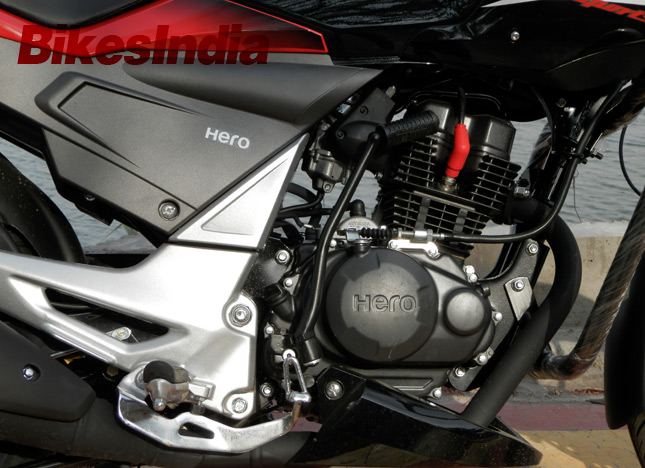 Hero is still using Honda's engine technology and it becomes quite evident the moment you thumb start the engine. It is a very refined engine and sounds almost similar to Honda Unicorn (the old one). I missed the grunt and growl of the Suzuki Gixxer's engine. The transmission is also smooth and needless to say it has all the traits of Honda. However, when you go to start the engine with the kick starter, you will find the signature "CBZ" as you have to retract the front footpeg to make way for the kick to come down. Apart from this signature characteristic of the CBZ I did not find anything else that can remind me of the legendary CBZ. 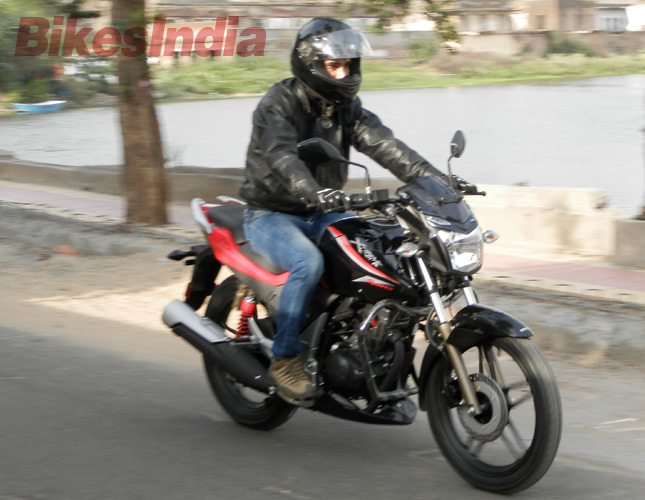 The 149.2cc air cooled 4-stroke engine is taken from the Xtreme which is also been used in Hero Hunk, Hero has tuned the engine differently to extract the maximum Power of 15.4 Ps at 8500 Rpm and peak torque 13.5 Nm at 7000 Rpm. This makes the Xtreme Sports the best in class performing bike amongst the lot available. But frankly speaking I did not feel that power may be because of the slightly lower Torque output, as you tend to enjoy the Torque first as soon as you twist the throttle. The higher power output comes into play when you talk about the top speed and unfortunately I could not take the bike to its maximum speed to tell you the top speed achieved. 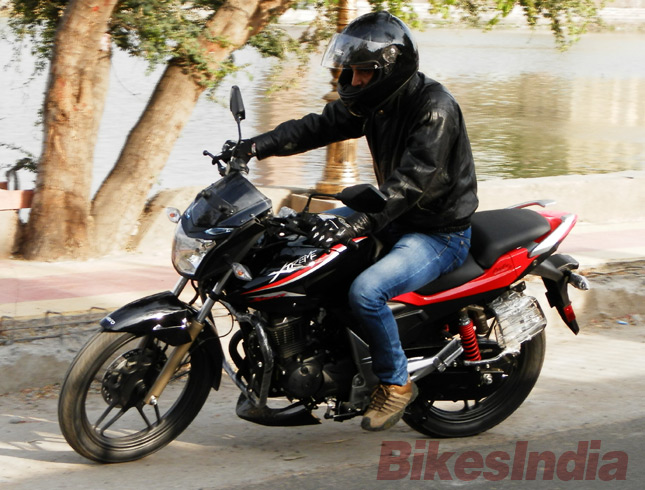 The Hero Xtreme Sports is equipped with front telescopic suspension and the rear has twin gas charged shock absorbers, although the rear shock absorbers are 5-step adjustable and are gas charged but devoid of the monoshock absorber is a clear drawback that you would notice the moment you look at the bike. While riding on the bad patches the bike behaved quite well and the suspensions did their job pretty well, however there is no match with the meaty front forks that the other competitors have to offer and the monoshock at the rear wheel. 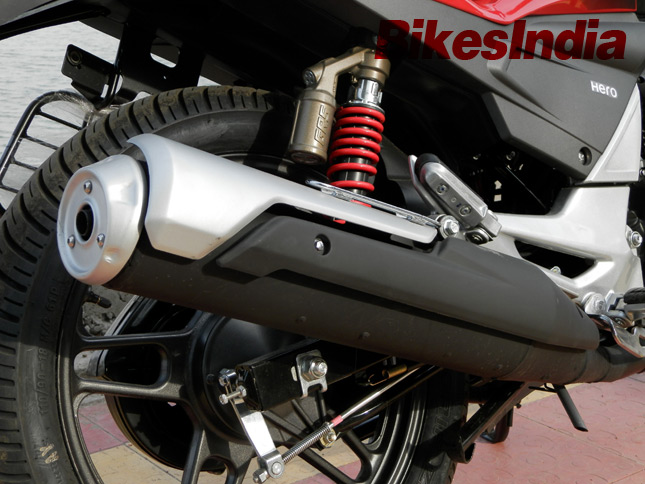 There is "Bybre" disc brake upfront and at the rear there is optional disc brake available, although the bike we got for the Road test was equipped with rear drum brake. The brakes were flawless and nowhere they disappoint me. The Xtreme Sports is featured with MRF Zapper tyres and they have as usual given me decent grip on tarmac. 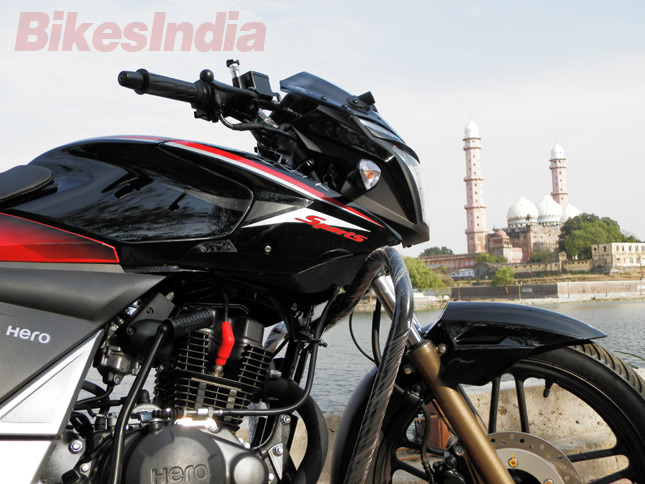 Hero Xtreme Sports is a decent performing motorcycle with some practical features on board but I personally think that Hero should have launched the bike before Suzuki or Honda did with their Gixxer and Unicorn 160, as now these bikes have raised the bar so high that the comparison becomes inevitable. Anyways, those who are die hard fans of Hero this is a great product for them but for those who will take their decision by comparing it with other available alternatives, they might see many reasons to walk away from Xtreme Sports. 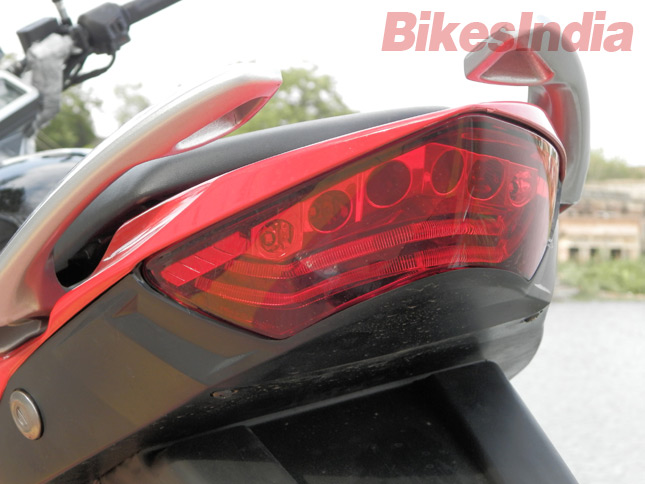 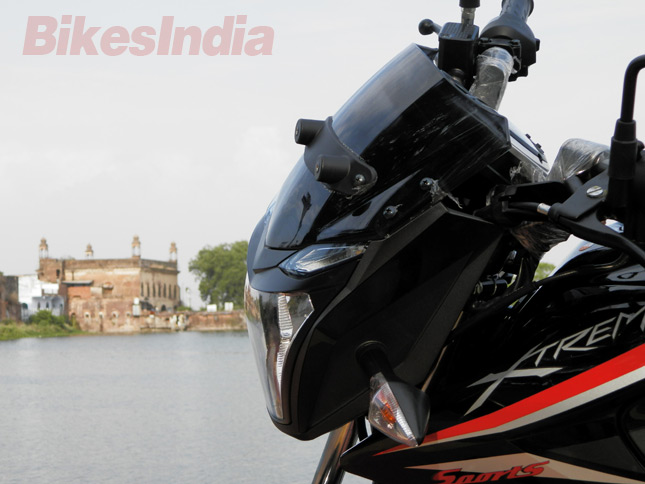 The Guide To Break-In Your Motorcycle Engine 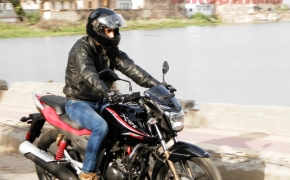 May 25, 2015
The engine Break-in or running-in period is very important and tedious process but if the engine is not run in properly, then you might face certain issues like a thrashy and rough feel, less mileage and lots of vibrations in the mid-end of the RPM range.