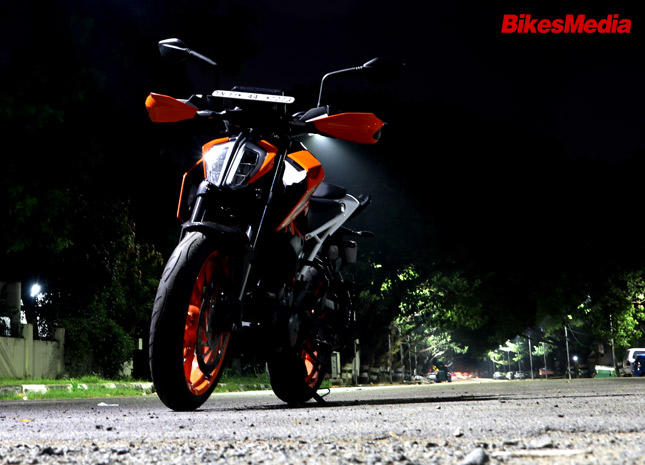 The old KTM Duke 390 was such a huge hit in our country, it was like a mandatory motorcycle for almost every enthusiast. It produced raw power that will thrill the rider whenever he rides the machine. The only drawback was that the Duke 390 and the Duke 200 looked very similar. The orange trellis frame on the 390 was the only easiest way to differentiate between them. KTM wanted to update the Duke 390, to make it look more distinctive and attractive. The new motorcycle was caught testing several times in our country. It kept the riders on their feet to witness the final production model face to face. Man after they launched the motorcycle, it looked gorgeous. Here is the comprehensive road test review of the 2017 KTM Duke 390 and this is what all we found out. 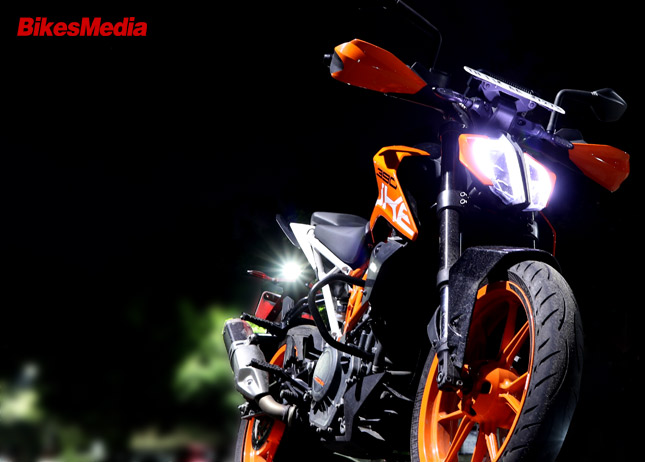 The motorcycle looks similar to the Super Duke 1290, with a stunning predator look. The first thing you notice are the orange colored wheel rims, man that distinguishes the Duke 390 totally from the Duke 250. The tri color paint scheme has black, white and orange colors that make the motorcycle look appealing and colorful from every angle. The headlamps have a full LED system that provide amazing visibility with a good throw at night times. 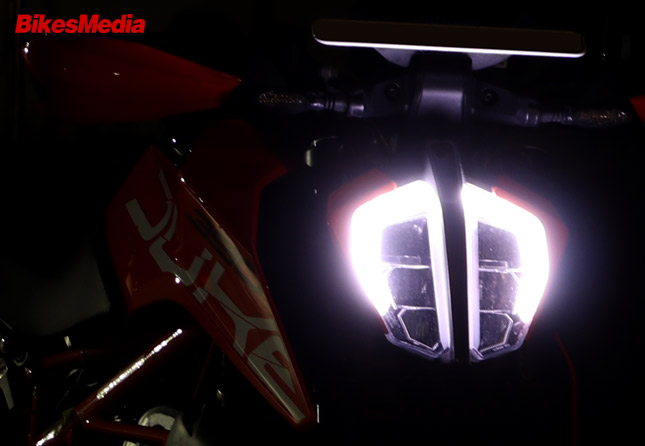 Look into the headlamps you find a sequential arrangement of the reflectors that help the LED lights achieve a great visibility power. The DRL's too do a great job. The 390 gets the handlebar protectors which makes it look good, but is not very helpful if you want to have your own adjustments for the clutch and brake levers, by that I mean the levers don't move for a longer reach setting, because the length of the handlebar protectors from the levers is short. The indicators are compact and do their work fine.

The side profile remains similar to all the other Duke motorcycles with the exposed trellis frame and with the main frame in orange and sub frame in white color. The tail lamps too have a full LED unit and is much similar to the one seen in the Duke 250. The side mounted exhaust also makes it a stand apart from the old Duke 390. 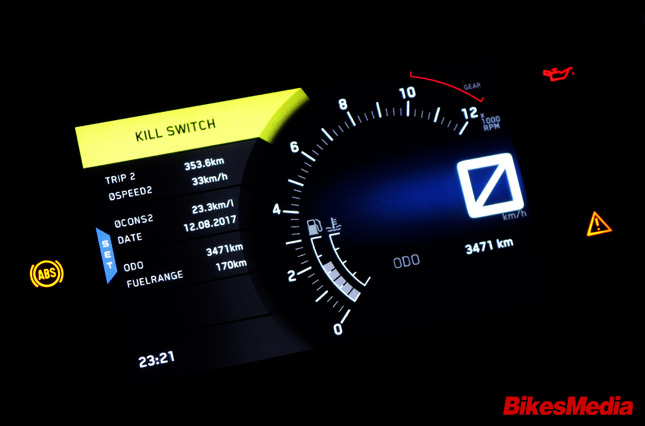 The motorcycle gets a fully digital 5inch instrument panel that is loaded with features. The instrument panel also gets an ambient sensor on the top right corner which helps the rider to have white background during the mornings and blueish black color for the nights for a pleasant reading experience. It gets tons of sensors and indicators like multiple options for ABS, trip meters, Bluetooth connectivity, low oil indicator which the old 390 lacked, distance to empty, voltmeter for battery, options to change music, receive calls and so much more. The quality of the switches feel top notch, the motorcycle also gets a one touch ignition, joy stick controls for the instrument panel, pass light control with the high beam feature too integrated along with it. 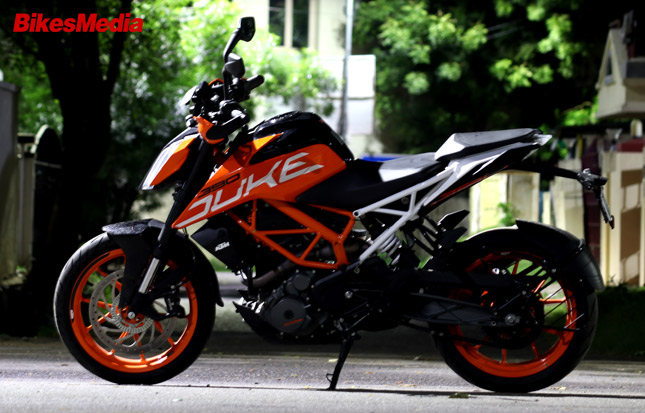 The motorcycle is well designed when it comes to the aerodynamics, it would have been better if KTM had included a small windshield for a better wind resistance. The footpegs are well integrated and have a rubber cushioning on them too. The nice and wide handlebar gives a sporty position which is comfortable even for long rides and traffic roads. The motorcycle brings the rider to an aggressive seating position when he bursts open the throttle.

The Duke 390 finally gets a metal tank with an increased fuel capacity of 13.5 liters, enabling it to have a better fuel range. The mirrors are not very great, but offer decent visibility. The motorcycle weighs 149kgs dry and flickers beautifully in the traffic roads. I would appreciate if KTM had provided a softer grip for the hands. 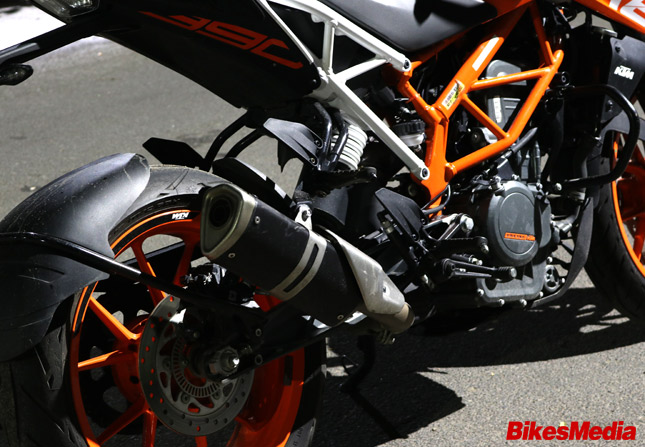 The Duke 390 is powered by a 373cc, four stroke, liquid cooled engine that churns out 43.5bhp at 9000RPM and 37Nm of torque at 7000RPM. The engine is mated to a six speed gearbox, that gets the assist Slipper Clutch to avoid wheel lockups under aggressive downshifts. The motorcycle also gets an EVAP System. We took the motorcycle for a good 200km long ride and was something really impressive to ride, the torque didn't kick in like it used to on the old 390 but was still a fun motorcycle to ride. 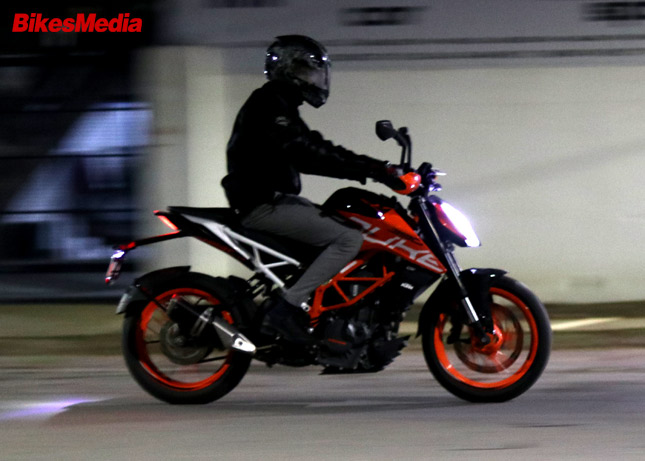 Ride the motorcycle smoothly, trust me it will make you fall in love with it every second you ride it. The smoother you accelerate and the smoother you shift, the more you will want to ride it. The heating is lesser compared to the old 390, but the radiator fans keep running almost all the time. The gearing is a bit tall, so it knocks at higher gears in lower speeds. The engine feels far more refined than the old Duke 390. The shifts also feel smoother. The motorcycle feels comfortable to cruise from 100-120kmph, after which the engine starts to strain a little bit. Vibrations are felt post 7500 rpm but dampen out soon. The vibrations are most felt on the mirrors and the foot pegs. 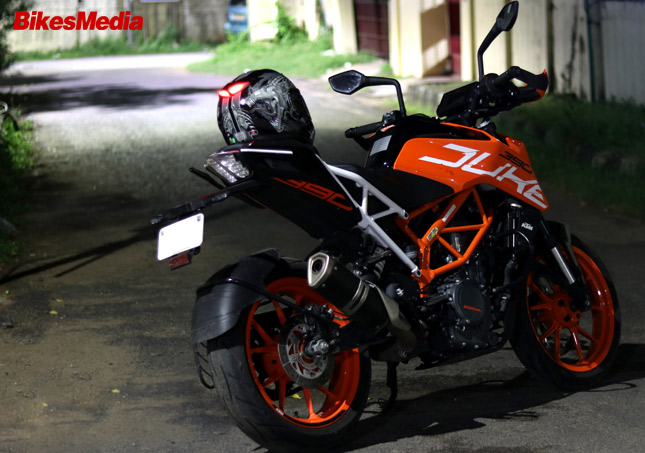 The first and most important point is that the Duke 390 gets a switchable ABS, with three modes. The motorcycle gets a huge 320mm disc in the front and a 230mm disc in the rear and the best part is that they get sinted pads. The brakes are just perfect to stop the motorcycle without any lockups when the ABS is on. Even under rainy conditions when it is braked hard, it smoothly stops the motorcycle without any hassle. The suspension feels plush for the rider but does not work similarly with the pillion rider. The front end gets a 43mm WP USD fork with 142mm travel and the rear gets a WP monoshock with 150mm travel. I was very impressed with the seat quality of the motorcycle, it feels far far better to the one that was there on the old Duke 390.

Confident that you can handle the torque and power? Just close your eyes and go for the 2017 Duke 390. 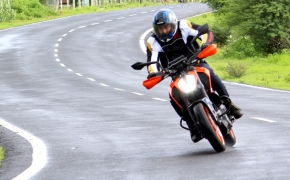 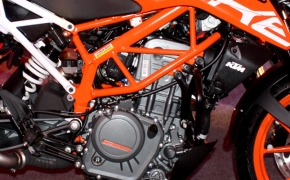 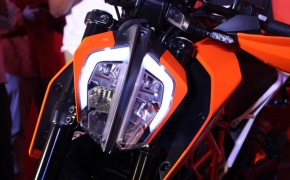