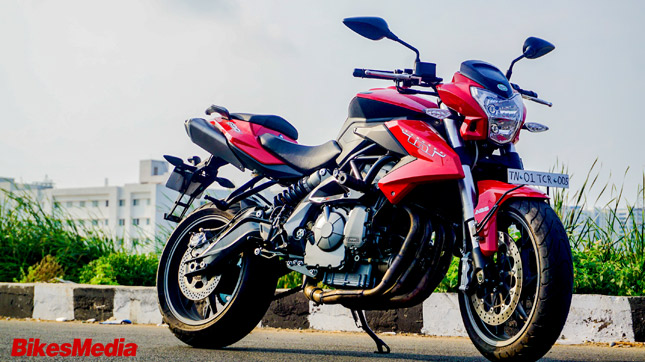 Benelli an Italian manufacturer entered the Indian market in the year 2015, since then they are known for selling amazing motorcycles with outstanding exhaust notes. The TNT600 was launched in two variants, the TNT600i and the TNT600 GT, both of them are amazing performers but lacked the breaking that a 600cc motorcycle must have. So Benelli decided to bring in the ABS variant into the market on the TNT600i. The TNT600i ABS variant was launched in the year 2016. The TNT600i is one of the highest selling 600cc motorcycles in our nation simply because the inline 4 is placed at an affordable price range that most can afford. We had the TNT600i ABS for a whole day, let's find out how the motorcycle played its game. 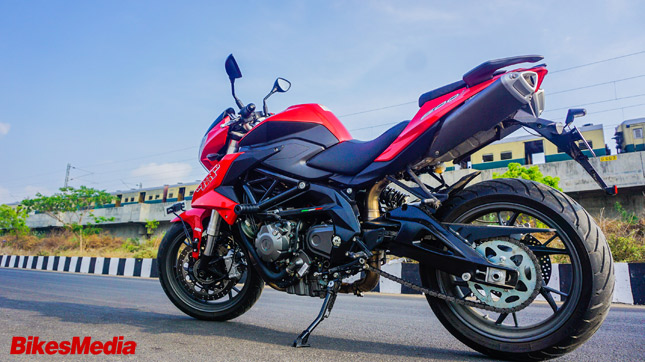 Upfront the Benelli TNT600i looks humongous and macho, it can easily be an attention grabber. The front headlamps are split into two vertical sections that provide ample visibility during night rides. The sharp bikini fairing and the sleek turn indicators make the TNT look bad ass and aggressive. The fuel tank looks bulky and chiseled. Coming to the side profile, the trellis frame makes it look appealing. The rear section has a 4X2 exhaust that is placed under the seat, the exhaust is well integrated and insulated so that that pillion can hardly feel any heat from the exhaust. On the whole, the naked motorcycle looks neat and special. The motorcycle comes in three colors, Rosso, Bianco, and Nero. 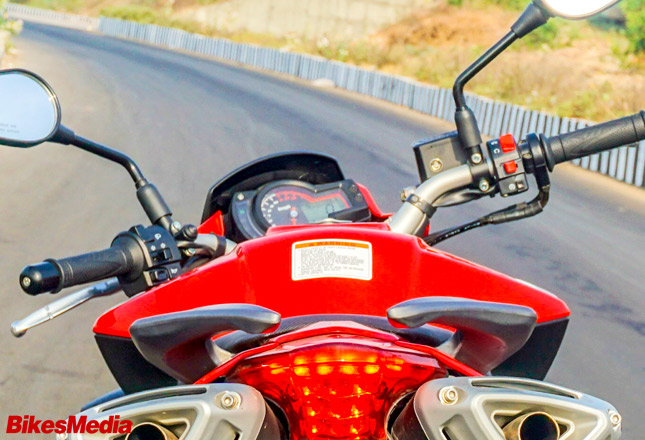 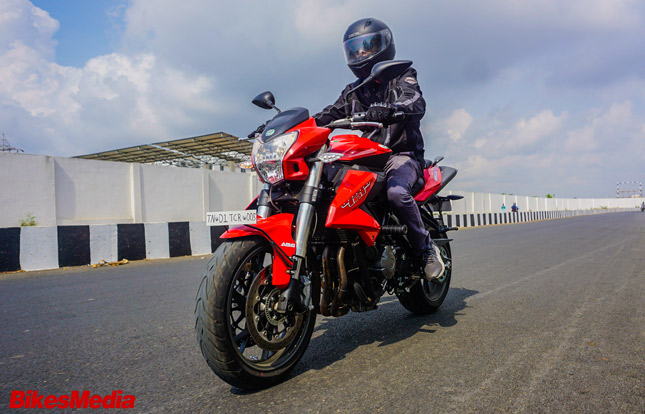 The overall length of the motorcycle is 2,160 mm, width is 800mm, with a ground clearance of 150mm and a seat height of 800mm. Weighing in at 231 kg with a fuel tank capacity of 15 liters, the TNT600i isn't a light motorcycle but feels like a hot knife through butter once you start riding it. The seats surprisingly felt very soft for both the rider and pillion. The bulky motorcycle doesn't feel hard to ride even for light riders. Cornering the motorcycle was a bit tedious, it's weight was drastically felt while bringing it back to the riding position. Pushing the motorcycle in standstill position felt very hard due to its weight, especially in slopes. 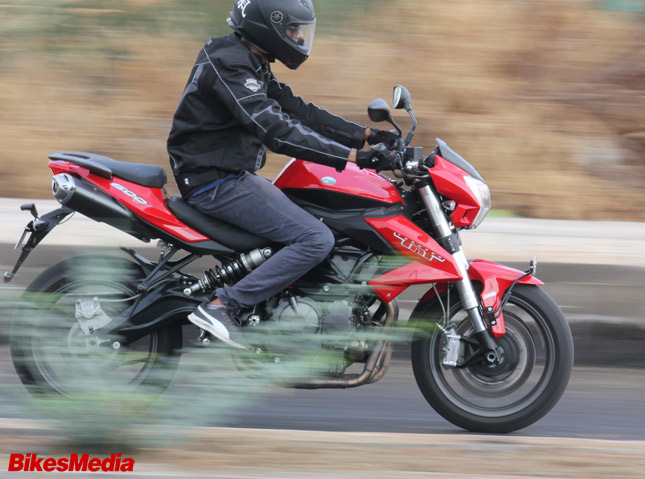 Crank the engine and the best comes to life, the TNT600i is one of the best and snarliest sounding inline 4 motorcycles in the market. The TNT600i is powered by a 600cc inline 4 that produces 82.70 BHP at 11,500RPM and a maximum torque of 56.40Nm at 10,500 RPM. The lengths of the bore and stroke are 65mm and 45mm respectively. The engine meshes to a 6-speed gearbox. Once you start riding the motorcycle, it feels calm until you touch the 8,000 RPM, post which you feel the power all of a sudden. After the power band is crossed the entire power is kicks in and you feel the sudden thrust from the motorcycle. 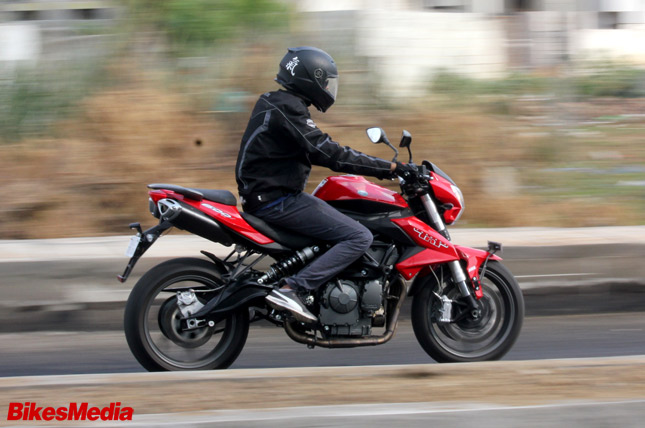 The components used in the engine are premium. The motorcycle does a 0-100 in 4 seconds which is really quick for its capacity. The gearing in the TNT is short but can easily pull from low speeds in high gears seamlessly. There's absolutely minimal knocking that it produces, making city rides easy and comfortable. The motorcycle feels well sprung and never felt unstable at high speeds too. We were able to clock a top speed of 195kmph in a jiffy and the motorcycle felt very stable even at that speed. 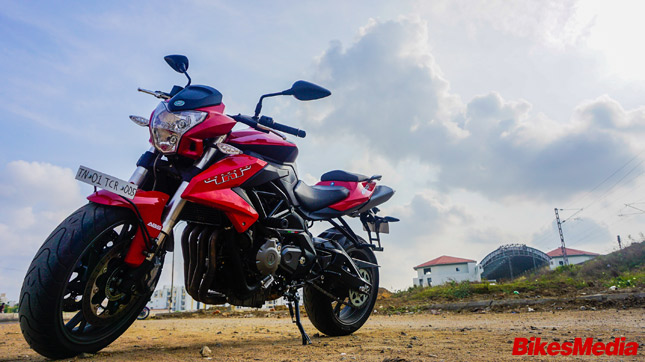 The ON-OFF throttle transitions feel really good, with very less lag. Man the exhaust note is what makes this thing a darling to ride. Vibrations are felt on the mirrors and foot pegs, the vibrations on the mirror are too high and are pointless to have the mirror beyond a certain limit, but the vibrations on the foot pegs can be ignored since they are not too high. The engine produces too much heat in traffic conditions, sometimes making you feel it is impossible to ride without a thick jean and heavy boots.
Braking and Suspension: 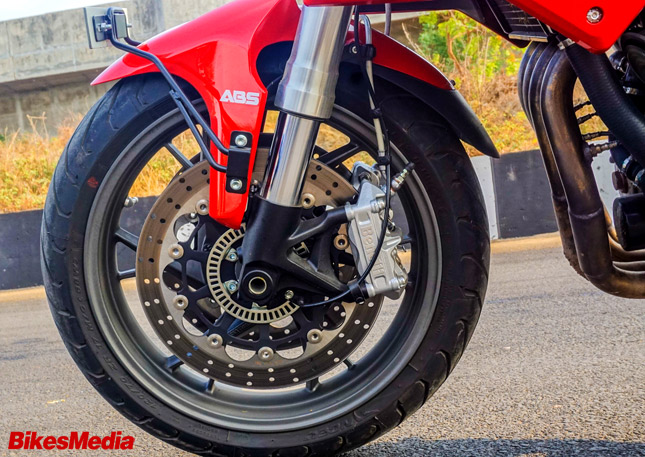 The region where the old TNT600i lacked was in the braking, but the brakes are drastically improved on the ABS variant, it has better feedback and a better stopping power now. The front end receives double 320mm discs and the rear end gets a 260mm single disc. The brake pads can be improved to make the braking even more effective. Apart from these, the brakes feel really good. The game changer in the barking division is the Pirelli Angel GT tires, they feel extremely grippy and stick beautifully to the road on aggressive braking. The motorcycle gets a USD front forks and an offset rear suspension. The suspension works amazingly and feels like it's custom-made for the Indian road conditions. They absorb the potholes and bumps seamlessly, the jerks are barely felt.
Pros:

* Vibrations on the mirrors.
* Fuel tank capacity can be increased.
* Heat produced. 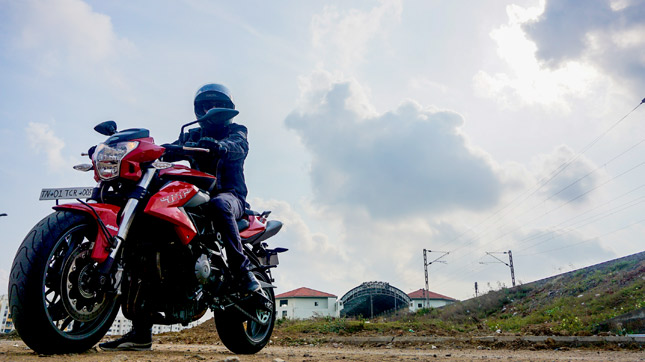 For the price range in which the TNT600i ABS is placed it is a great pick, sometimes making you ignore many other inline 4 motorcycles. Apart from the heat produced, fuel tank capacity and vibrating mirrors, the TNT 600i ABS can be your motorcycle without a second thought.

More reviews of Benelli TNT 600i

Feb 20, 2017
The Benelli TNT 25 is a quarter-liter motorcycle that is set to rival the Mahindra Mojo 300, Kawasaki Z250 SL, KTM Duke 200, Honda CBR 250R and the most awaited Yamaha FZ25. We always wanted to see how the TNT 25 squares off against its rivals, here we bring you a comprehensive Road Test Review and this is how the motorcycle felt on traffic roads and most importantly on an empty stretch of road.
View all reviews of Benelli Bikes