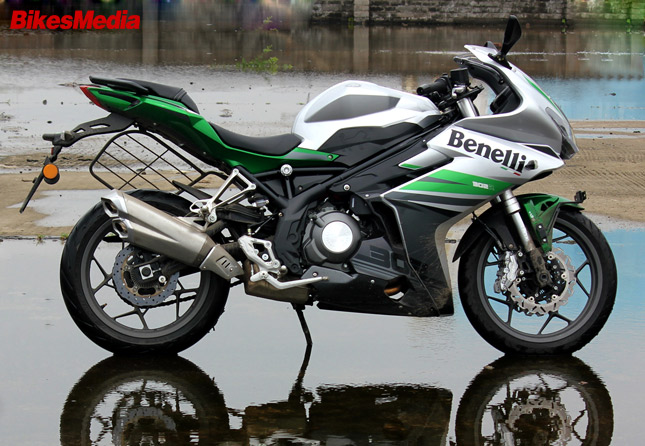 The Benelli brand in India was known for all the naked motorcycles they produce. The TNT 300 was initially brought into the market as an entry level superbike, a 300cc naked which was known for the pleasing exhaust note it produces. It did have a few drawbacks though, a few riders wanted a fully faired version of a Benelli motorcycle and then the day came when the enthusiasts visualized the fully faired version of the TNT300 with better ergonomics, looks, fit and finish. Here we bring you the Benelli Tornado 302R review to find out how it fared. 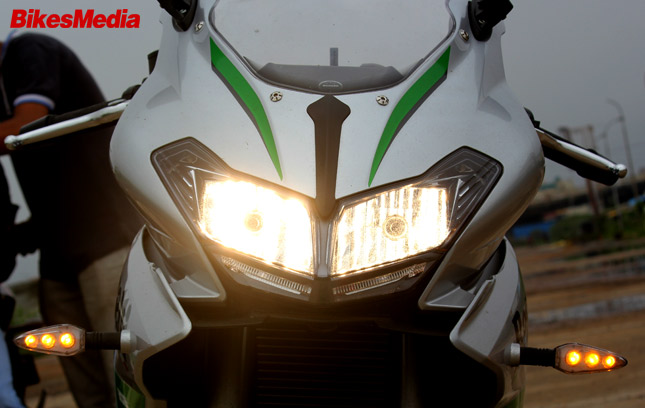 The motorcycle upfront looks amazing, the split headlamps with the LED DRL's make it look appealing. The silver with green color looks the most appealing amongst the colors Benelli offer us. The huge Benelli decals on the fairings look special. The indicators are LED and give a clear visibility. There is one cute thing that many might not notice, a small Benelli badging inside the windshield.

Coming to the side profile, the chiseled tank looks huge and muscular, making the whole motorcycle look beefy. Benelli has offered its trademark exposed trellis frame, a common thing that they do for all motorcycles. The exhaust looks nice and shiny, there are bits of weld marks on the exhaust, which looks a bit ugly when it is seen from closeup. The pillion rider gets a grab rail to hold on to unlike the Yamaha R3 or the Kawasaki Ninja 300. The engine gets a nice metallic Benelli badging on it. Something that I was really impressed was the carved Benelli logo on a small black pad on the sides of the tank, it looks simple and can be noticed only when you see it close. 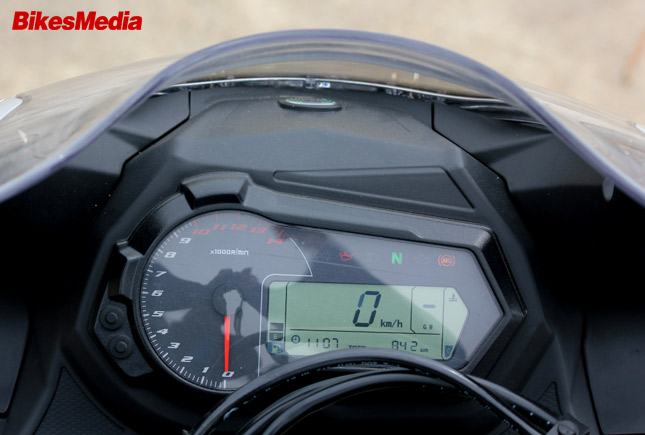 The instrument panel actually looks a bit too dated for a modern bike, it gets a digital speedometer, analogue tachometer, two trip meters, gear shift indicator, tell tale indicators, ABS indicator. There is nothing much to describe about the instrument panel. The build quality on switchgear feels premium, the buttons have a nice and soft touch to them. The right side gets the kill switch, hazard light button, and the self start button. The left side gets an ABS switch, pass light switch, indicator switch and high beam low beam switch. The quality of the material used feels far better than what was seen on the TNT300. 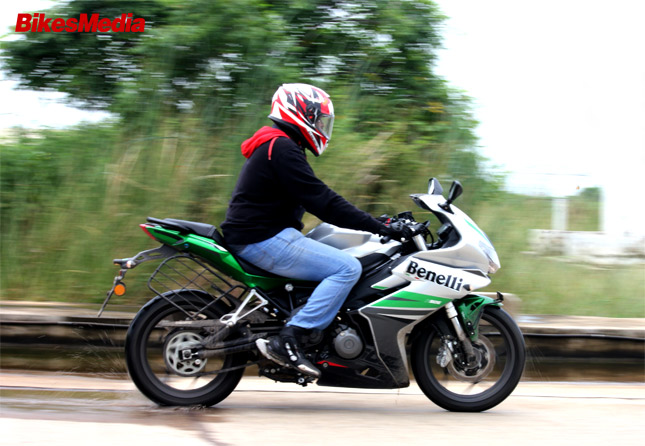 The Benelli 302R is more over like a sports cruiser, with a little upright seating position. The rear set foot pegs give a nice and sporty riding position. It is comfortable to ride it even in the city roads, but there is a bit of palm aches under heavy traffic. In spite of being so heavy, the bike feels really easy to ride. The handlebars I feel are a bit too long for the motorcycle. The weight isn't felt much when the motorcycle is cornered. The cushioning on the seats feel really soft and I never had any butt aches. 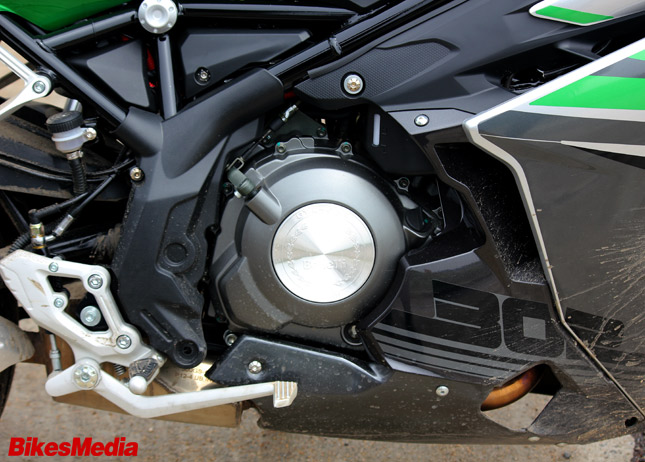 The Benelli Tornado 302R is powered by a 300cc engine that produces 38.26 BHP at 11k RPM, and a maximum torque of 26.56Nm at 10k RPM. The engine is mated to a 6 speed gear box. Crank the engine and my God, the exhaust note sounds so bassy. Rev it up post 8000rpm you can hear a totally different exhaust note from the machine. The engine feels a bit sluggish when it is compared to the TNT300. Small vibrations are felt at around 5000 RPM range.

The gearbox feels smooth in up shifts and a bit hard during downshifts. Post 8000RPM yeah, it does feel a bit active but not much, only during the red line you can actually feel some punch. The whole exhaust note changes post 8000 RPM, the motorcycle comes to life shooing off and angering all the dogs. 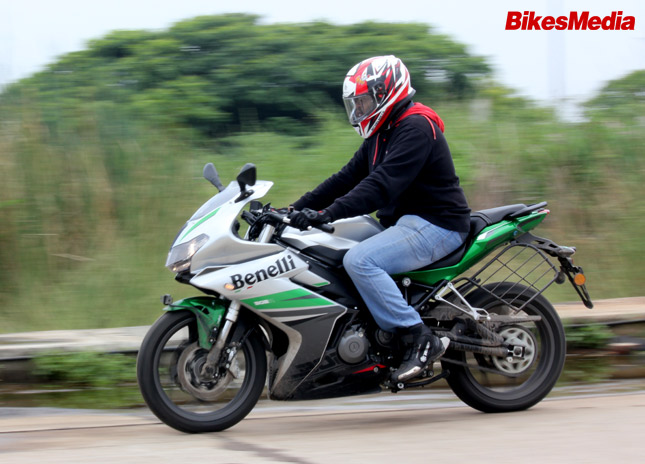 The engine should have been tuned more for peppiness. There is a bit of throttle lag during the initial stages. At sometimes it is felt that the power exhibited does not equal the amount of noise the exhaust produces. The motorcycle lacks any hopping clutch which helps a lot under aggressive downshifts. Engine braking too was not upto the mark as seen on the R3 or the Ninja 300. There was minimal knocking at high gears and low speeds. The third gear was the sweet spot where there was ample amount of juice in all the ranges. The engine feels like sloth at times, you need to wake it up, to extract the power out of it. 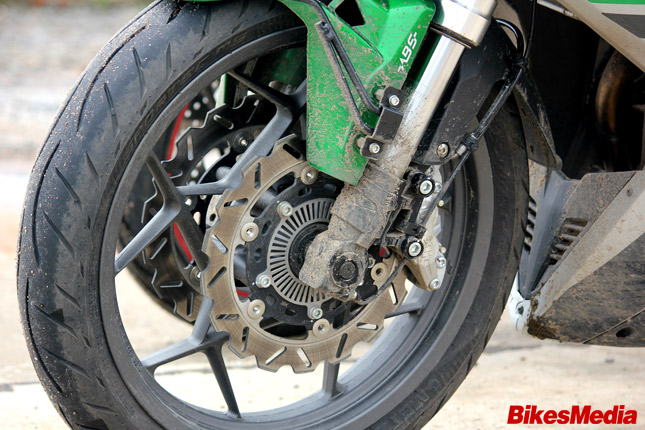 The front brakes feel progressive and lack bite. The rear brakes do a better job when it is compared to the front brakes. The brakes need a better bite. It is good that they do not lock up due to the assistance of the ABS. When the ABS is turned off, the rear wheel locks up easily, sometimes leading to a fish tail. The suspensions are the best part of this motorcycle, the cushioning are also really good. The pot holes were dampened with ease, I could hardly feel any discomfort as a rider or as a pillion. The USD and Monoshock do a great job.
Pros: