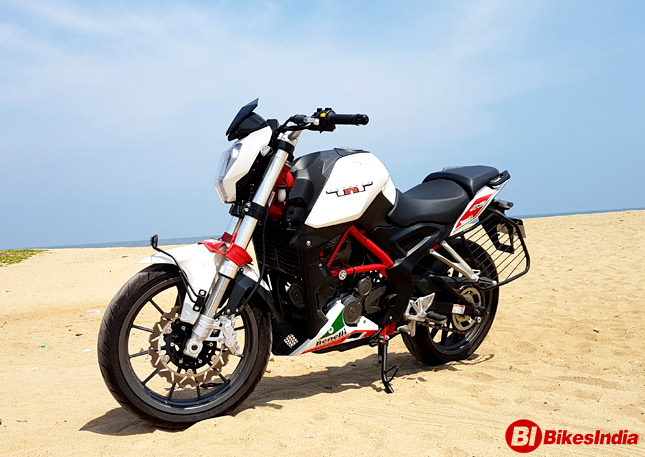 Benelli is one of the oldest and most renowned brands for manufacturing naked superbikes. They brought their lineup of motorcycles to India in 2015, ever since then they had a large mass buying the TNT300 and TNT 600, but they were a bit expensive, not a very affordable range for the common people. So that’s when Benelli decided to bring in the game changer the TNT 25, a single cylinder 250cc motorcycle from a premium manufacturer that most can afford. The motorcycle was launched on 30th of March 2016, ever since then it has been doing pretty well in its segment. 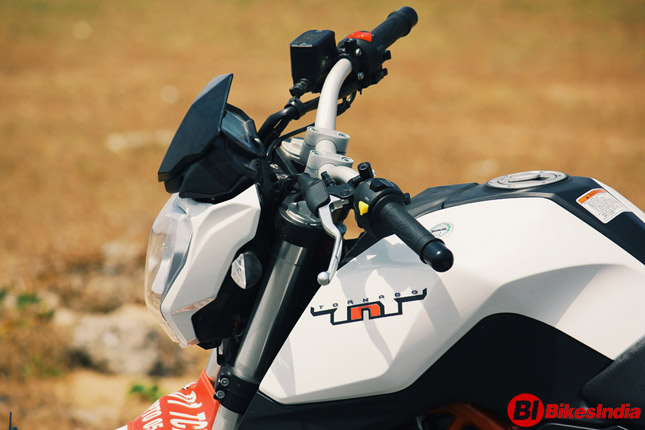 The TNT 25 is a quarter-liter motorcycle that is set to rival the Mahindra Mojo 300, Kawasaki Z250 SL, KTM Duke 200, Honda CBR 250R and the most awaited Yamaha FZ25. We always wanted to see how the TNT 25 squares off against its rivals, here we bring you a comprehensive Road Test Review and this is how the motorcycle felt on traffic roads and most importantly on an empty stretch of road. 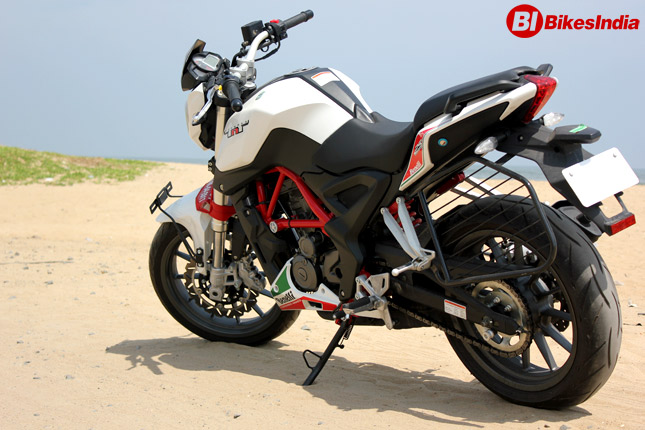 Up front the motorcycle looks very similar to its older sibling the TNT300, the headlamps especially are drawn from its older sibling. Move towards the tank the black layer of protector looks similar to the TNT899, apart from that the motorcycle looks all new. When it is viewed from the side, it has a nice compact and macho feel to it that makes it look neat and appealing. The red trellis frame looks pleasing and neatly welded. It gets a belly pan with a tri-color scheme that represents the Italian flag colors. 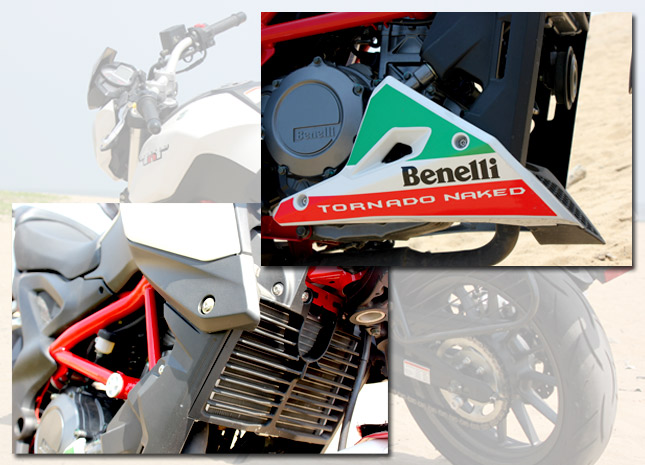 The indicators are neatly laid out. The rear gets a single piece of LED tail lamp that looks sleek. The pillion also gets grab rails, C-shaped grab rails. The key slot to open the rear seat for storage space is placed on the left side under the seat. There is adequate storage space inside the seat. There is a tiny exhaust that is placed on the right side that looks tightly packed with the motorcycle. One thing that I personally loved is that Benelli has offered a guard to the radiator which is missing in the TNT 300. Benelli offers 2 colors Biacno (white) and Rosso (Red). 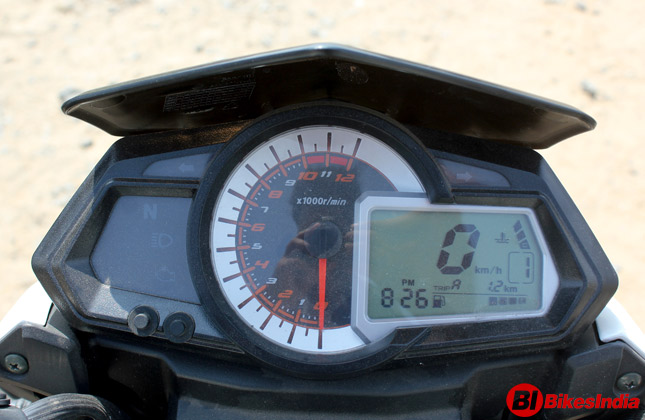 It has a neatly laid out instrument cluster, that is shared with its older sibling the TNT300. It bags a speedometer, tachometer, fuel level indicator, gear shift indicator, a clock and a trip meter. The speedometer feels easy to read even under the blazing sunlight. The flip keys that Benelli offer on all their motorcycles is very distinctive and feel up-market. The grips feel nice and soft to hold. The switches feel well built and add a premium touch to it. 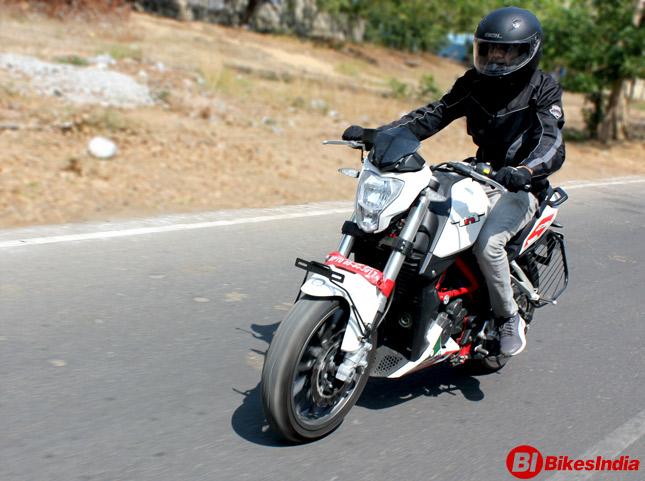 The TNT 25 weighs 159 kg kerb and had a fuel tank capacity of 17 liters which is a whole lot for a 250cc motor. The riding position is the major plus point on the TNT25, it feels really calm to ride the motorcycle with a centre set foot pegs and a wide single piece handle bar. The riding position feel was my most favorite part of the entire motorcycle. In spite of riding it for nearly 100 km in the blazing heat and traffic, it never felt tiring or annoying.

Flickability is amazing; it carves through the traffic with minimal efforts. The weight distribution was perfect. The overall length and width of the motorcycle are 2080mm and 810mm respectively. The seat height is 780mm with a ground clearance of 160mm. However, one thing that lacks in Benelli TNT25 is its rear foot pegs for the pillion, it felt too small and could barely accommodate an adult’s foot. Although, the pillion comfort was decent for a short ride. 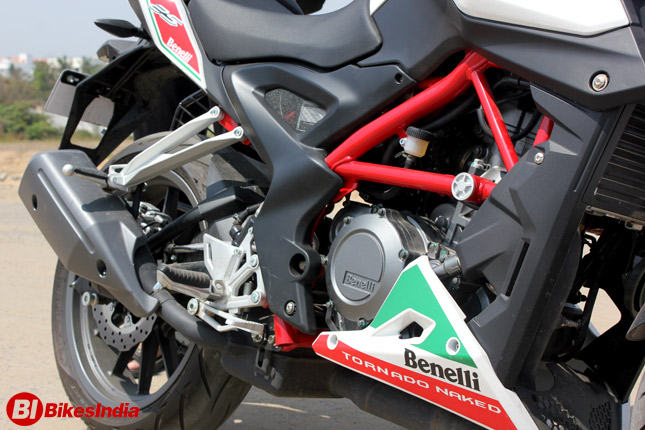 The TNT25 is powered by a 249cc single cylinder, liquid cooled engine with 4 valves per cylinder with a bore length of 61mm and a stroke length of 72mm. The motorcycle is fuel injected and churns out a maximum power of 28.16 BHP at 9,800 RPM and a maximum torque of 21.61 Nm at 8,000 RPM. The engine is mated to a 6-speed gearbox with a wet multi plate clutch.

Once you turn on the engine, there's a nice bassy beat that the exhaust produces. Once you start riding it, the motorcycle feels composed to ride until 6,500 RPM, after which the power kicks in all of a sudden and there is a change in the whole scenario. Vibrations are also felt post 6500 RPM on the tanks and the handlebars. Benelli must do something to damp the vibration levels on the motorcycle. 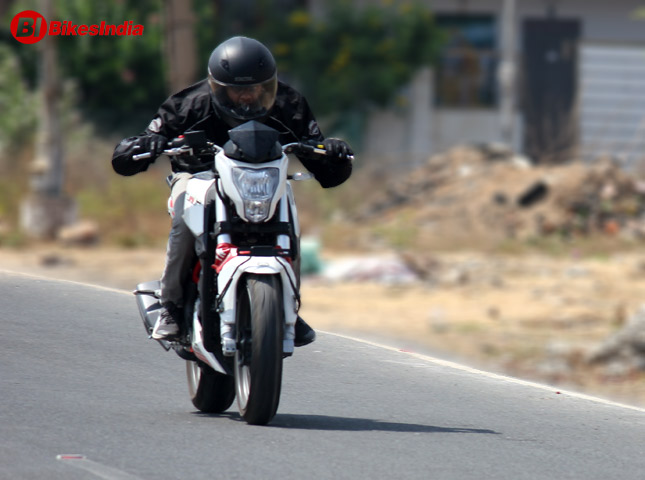 The 6-speed gearbox felt sharp and sleek for each shift. The motorcycle felt best to ride in the second and third gears. The radiator is very effective as there was hardly any heat felt from the motorcycle, the best part is that the radiator fan sound was barely heard. The clutch was a bit heavy and annoying at times under stand still traffic conditions. Apart from this, the engine felt nice and peppy to ride.

Ride it past the 6,500 RPM ignoring the vibrations, the motorcycle will start growing on to you. There is a bit knocking issues under high gears and low speeds. The motorcycle does 0-100 in under 10 seconds and offers a fuel economy of 30-32 kmpl. 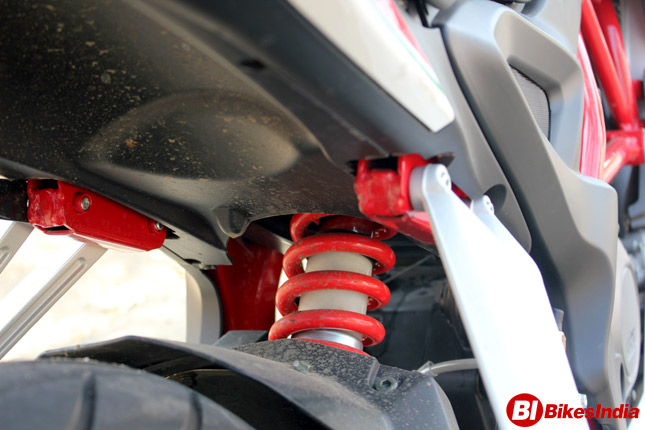 The front end of the Benelli TNT25 receives a 280 mm disc that offers a decent stopping power. The rear gets a 240 mm disc, the rear disc didn’t feel very great, it did lack some feedback and did take some efforts in bringing it to a standstill position. It is sad that the motorcycle lacks ABS, whereas the competition like the Honda CBR 250R gets it at least as an option. The front brake lever gets a 4-way adjustable scheme that can be adjusted according to the rider’s convenience. 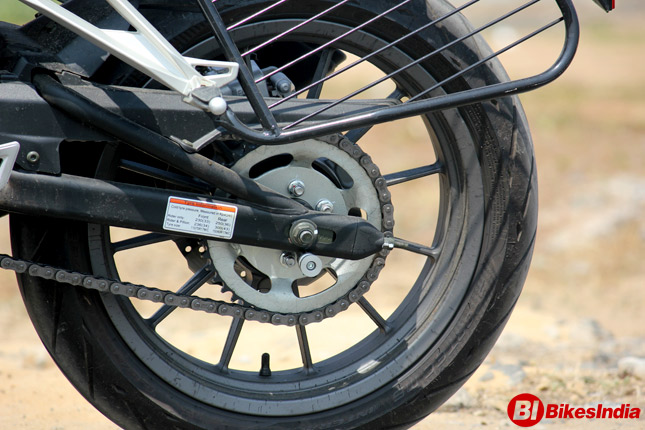 The front end gets an 110/70 R17 tire and the rear end receives a 150/60 R17 tire. The test motorcycle we received had Metzeler tires which felt super sticky. The suspension quality was really good and needs to be appreciated. They did a great job in absorbing potholes and soaking bumps. The front end is featured with 41 mm upside down (USD) fork and the rear gets a hydraulic monoshock suspension.
Pros-

* Brakes can be improved. ABS can be included at least as an option.
* Vibrations are a little high post 6,500 RPM.
* Pillion foot pegs are too small. 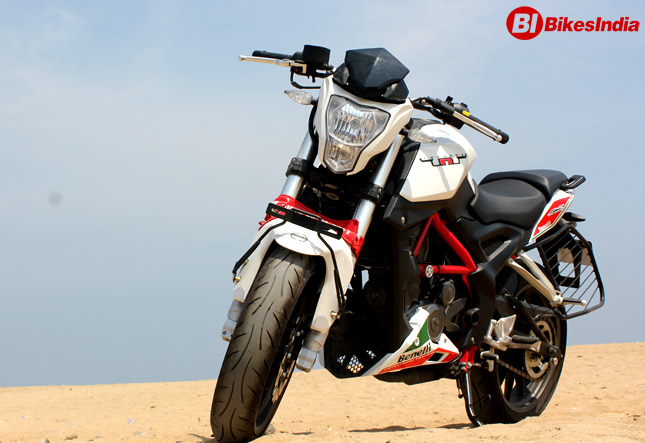 Leaving aside the cons, the TNT 25 is an amazing motorcycle, for someone looking for an affordable Italian quarter-liter single cylinder motor, the Benelli TNT 25 makes a great companion.

Dec 25, 2015
Benelli launched TNT25 to make the brand more affordable and to make a place in the segment which was ruled by KTM and Bajaj. Today the segment which the bikers love the most is 200-300cc bikes because they want more performance than 150cc sportbikes (Yamaha R15 and Honda CBR 150R) and manufacturers are trying their best to offer everything like looks, features, power to attract bikers. 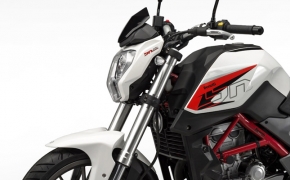 Dec 19, 2015
So our wait is over and Benelli has launched its quarter liter naked street fighter TNT25 to take on the competition with its rivals. Lets checkout its power, looks, styling and whether its rivals need to worry about it.