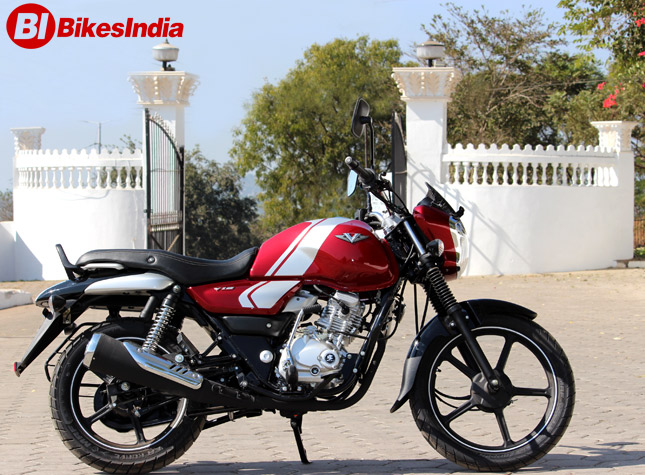 In the second month of the previous year Bajaj had launched their one of the most incredible motorcycles also called "The War Hero" and named it Bajaj V15- “The Invincible”. It was called invincible because Bajaj has utilized the metal of INS Vikrant aircraft carrier to built it. Recently Bajaj has silently launched the stripped down version of the same V15 motorcycle and this time named it V12. It looks incredibly a "Little War Hero" as the previously launched V15 and recently launched V12 are the two sides of the same coin. Let's find out what mettle the junior V15 is made of. 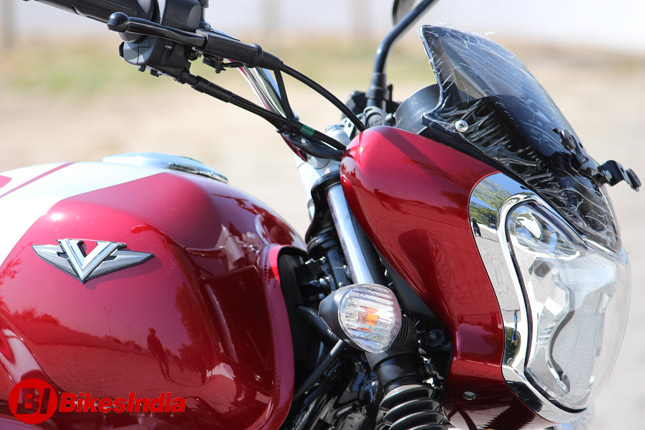 The very first look at the new V12 can deceive anyone as it's completely built like V15, from front to rear and from right to left side, the motorcycle looks absolutely similar to V15. However, there are multiple things that are present on the new V12 which on taking a closer look can tell you that it's different bike and not V15. 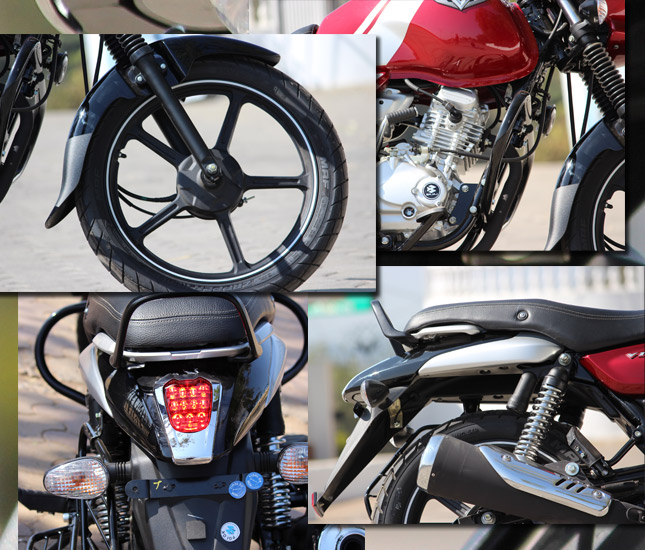 The major alteration received by the new Bajaj V12 is its engine, which is now 125cc air cooled Dts-i, twin spark engine used probably from the Discover 125. The alloy wheels and tyres are also different from its bigger sibling, now the new V12 is featured with regular 5-spoke alloy wheels which are used in other commuter bikes from Bajaj. The tyre profile is also changed and the V12 comes shod with front 2.75-18 tyre and 100/90-16 tyre at rear wheel. Both the tyres are tube type opposite to the tubeless tyres featured on V15.

The Suspension setup is also changed and the front telescopic suspension is not that meatier as the 33mm telescopic shock absorbers at V15. There are rubber boots also given on the front suspension to complement the all black front fascia of the bike, which gets completed with black colored front fender given on the bike.

The Ride and Feel: 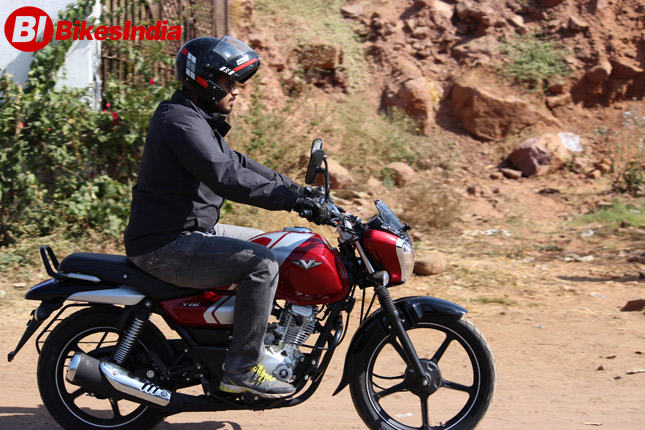 Looking forward to the ride, V12 is truly comfortable, the wide seat increases the level of comfort while riding. The high set and wide handlebar provides the upright siting posture and gives comfortable ride in both city and fairly long rides. The bigger front wheel and the wider but relatively smaller rear tyres provide smooth and flawless ride in all kinds of riding situation be it twist or turns or straight road.

However, the new V12 is equipped with 125 cc single cylinder engine but the good amount of torque in hand made us felt like we were riding a little bigger capacity engine motorcycle than a 125cc. The 5-speed gear transmission felt a little notchy but may be we are expecting too much from the brand new bike. This is especially because we've been witnessing a good amount of improvement in Bajaj products and their gearbox is one of those things that have received real upgrade. 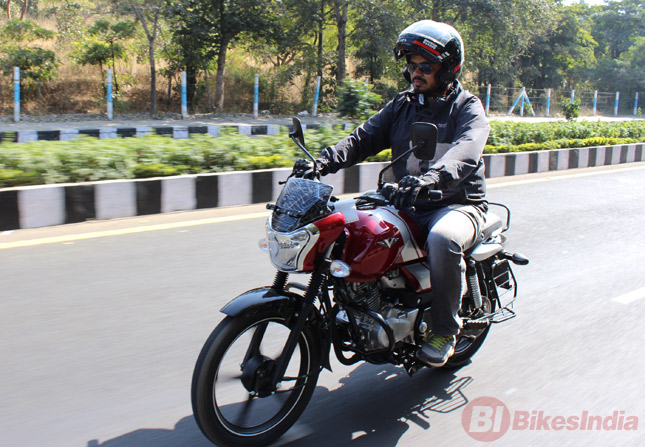 The telescopic front suspensions and Nitrox filled beefy rear suspensions made the ride much easy on the roads filled with potholes. To address the riding comfort the company has also given good quality of hand grips made up of soft rubber. Even the foot pegs are also featured with soft and grippy Rubber, including the foot brake paddle.

As far as brakes are concerned the new V12 comes only with drum brakes and there is no option available for the front disc brake. The front 130 mm drum brake felt insufficient and very spongy in feel, however the same sized rear drum brake works perfectly. 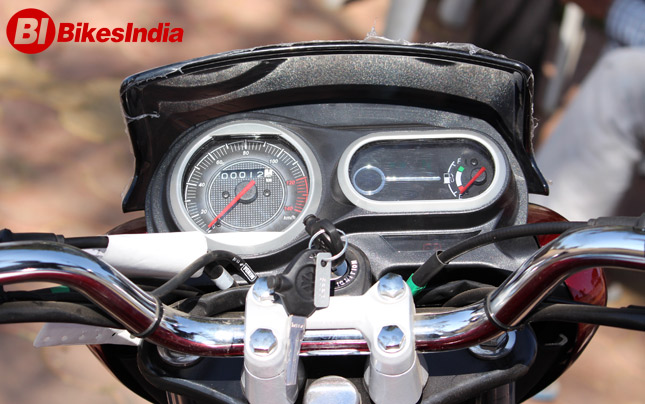 The meter console has been borrowed from the bigger sibling and is featured with big dial speedometer along with Odometer. On the other side the fuel gauge is present along with the other tell tale lights. The switchgear are made up of good quality plastic and have also been carried forward from other Bajaj models. The beautiful looking and muscular exhaust provides bassy sound which also makes the ride more pleasing to the ears. 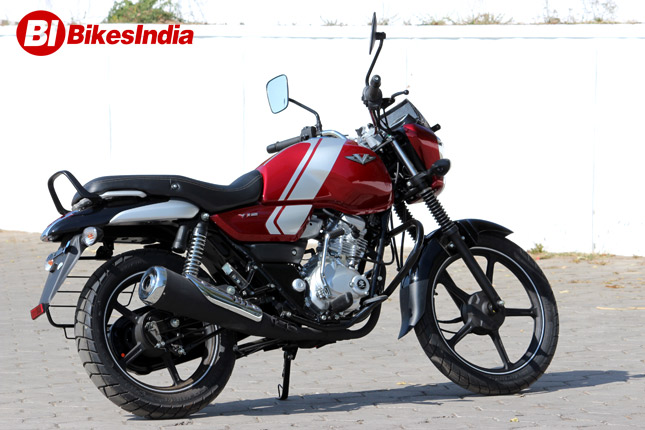 The new Bajaj V12, a motorcycle that is truly relevant to its own product V15 which was not much liked by many people in the beginning but later on its dynamic looks have attracted many riders. In the segment of 125 cc motorcycles V12 may also become the rider's choice due to its incredible looks and fluent performance. And not to forget the pricing of the product alongside the fuel efficiency of a 125cc motorbike.

Stay tuned to BikesIndia for a comprehensive Road Test Review of the newly launched V15 where we will put some more light on its real road performance, actual fuel efficiency and comfort level.