The flagship Bajaj motorcycle is getting a big update in 2019. The Dominar 400 had secured quite a decent sales but it seems like Bajaj is going to update it heavily for the upcoming year. There are a total of 5 new changes, let's take a look at them one by one.

The clearest update for the 2019 model seems to the USD front forks for better feedback handling. Currently, the bike employs 43 mm front telescopic front forks. The size of the USD suspension is expected to remain the same and this will mark the first time when Upside down suspension are being used in a Bajaj bike.

It seems to be popular nowadays, from Apache to Intruder, to Gixxer, several new motorcycles are using a twin barrel exhaust for better exhaust note. The 2019 model of the Dominar is also expected to utilize this method.

The rear tyre is receiving a higher sidewall it seems. Currently, the bike employs a 150/60 size rear tyre. This figure is expected to change to 150/70 in the new model.

The new model will feature a new paint scheme with it. The bike shown in the photo has a similar dual tone paint scheme as the current model, only a bit different. The final 2019 model may even showcase some new colours for the bike.

Bajaj is also expected to launch this new Dominar with BS6 emission norms as the deadline for equipping the bike with such emission standards is 2020. As a result, the new Dominar 400 will feature better fuel economy and fewer emissions. The total price of 2019 Dominar 400 is expected to go up, the current model has an ex-showroom price of Rs 1.62 lakh ex-showroom. 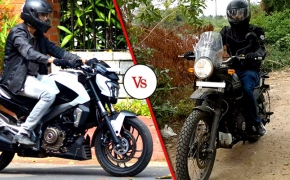