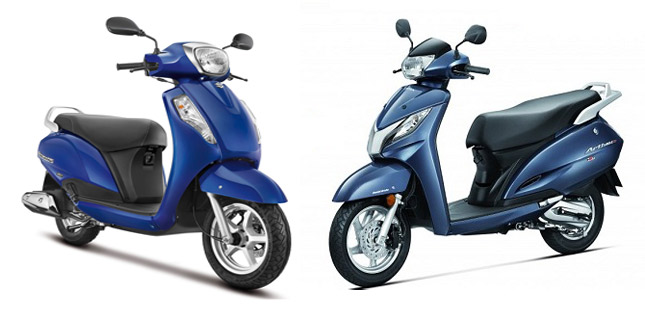 The 125cc auto gear scooter segment is picking up some serious pace, it is the same segment which was first addressed by Suzuki back in 2007 with the launch of industry first 125cc auto scooter- Access. Honda followed the suit and they had come up with Activa 125 to give Suzuki a tough competition. Ever since nothing much happened in the segment except Piaggio launching Vespa scooters in the same 125cc segment, but the Vespas belong to premium class and hence did not affect much to the rest of the competition.

Things started looking change when Mahindra updated its indigenous auto gear scooter Gusto and introduced the 125cc version of it. Taking the lead Suzuki reacted almost immediately and launched the updated 2016 Access 125. BikesIndia had done thorough review of all the three arch rivals in the segment- Honda Activa 125, Mahindra Gusto 125 and 2016 Suzuki Access 125. Let’s pitch the Honda Activa 125 against new Suzuki Access 125 and find out whether Suzuki took over the lead in product development or Honda holds on to the brand image they have created in India over the period of time. 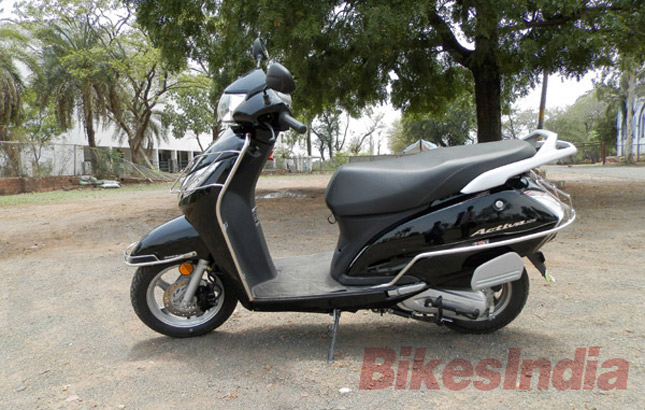 The Honda Activa 125 is a very decent looking scooter and it sort of gels in the crowed, there is no way it can stand out in the crowed and the mature audience love it simply because of this trait. The Honda Activa 125 has the front fascia resembling to the “Aviator”, especially the chromed front nose. However, the rear end including the taillight assembly resembles to the 110cc Activa. 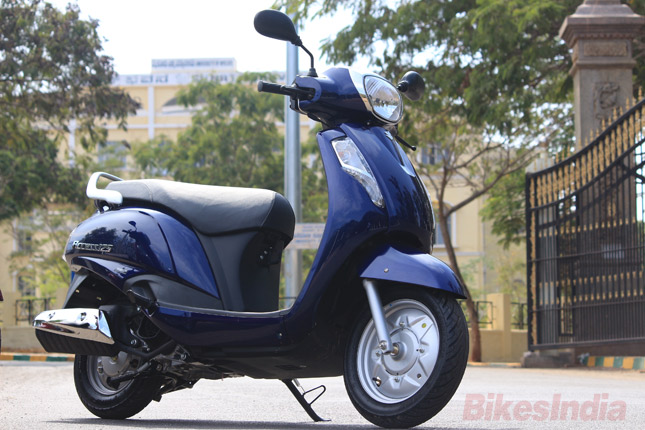 On the other hand the updated Suzuki Access 125 is a fresh breath of air, the scooter carries retro classic lines. The chrome wrapped rectangular headlight of the new Suzuki Access 125 is very refreshing and appeal to those who love classics. The tall stance of new Access gives it a prominent place in the crowed and makes it stand out in the traffic. However, the same tall stance of new Access 125 makes it a little hassle for short guys and especially for female riders. 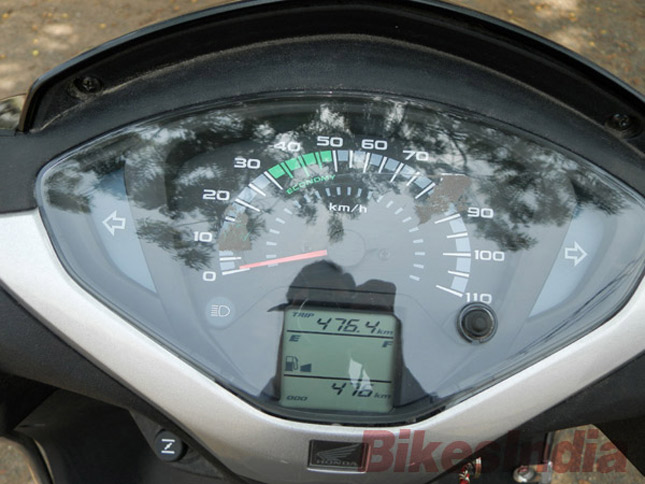 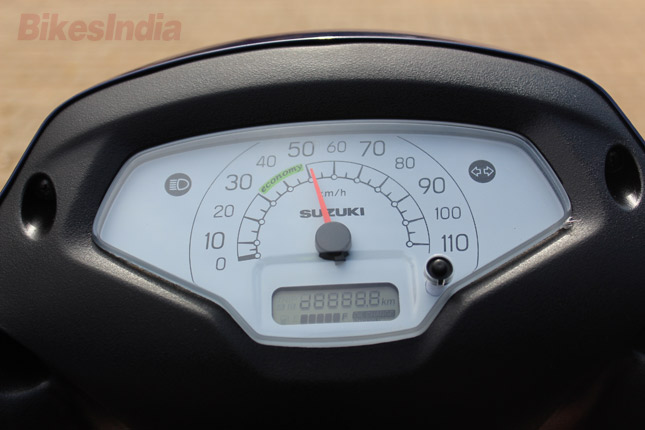 Suzuki has also featured dual instrument console on the new Access 125, the Speedometer comes in analog with White background increasing the visibility in all conditions, a thoughtful step by Suzuki. On the other hand the digital display is a tad smaller than the Activa’s but legible. To compensate the size of LCD digital display, company has given two trip meters, fuel gauge, Odometer and a unique engine oil change indicator. 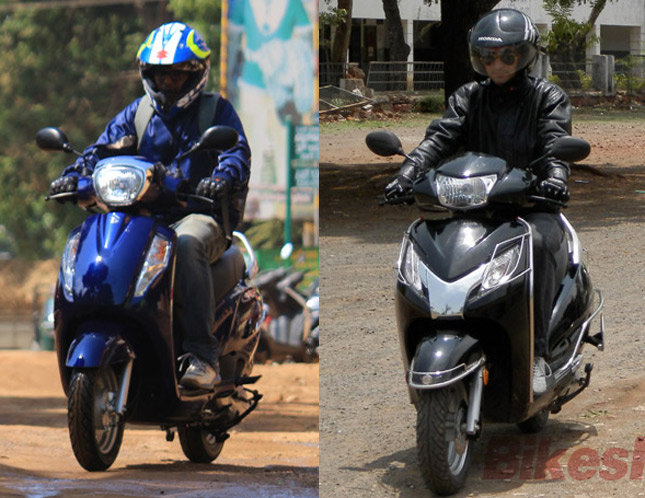 Both scooters have different ergonomics, the Honda Activa 125 stands a little shorter as compared to new Suzuki Access 125 and hence it commands more confidence while maneuvering. On the other hand the new Access 125 is featured with larger 1265mm Wheelbase and higher 160mm Ground Clearance making it more stable ride. The new Suzuki Access is also featured with a little larger fuel capacity of 5.6L as compared to the 5.3L fuel capacity of Honda Activa 125. 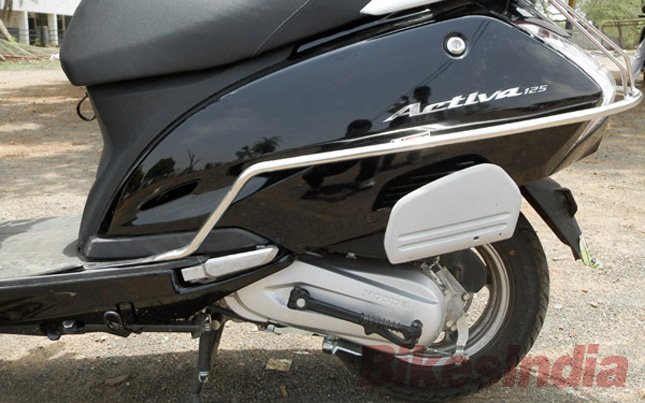 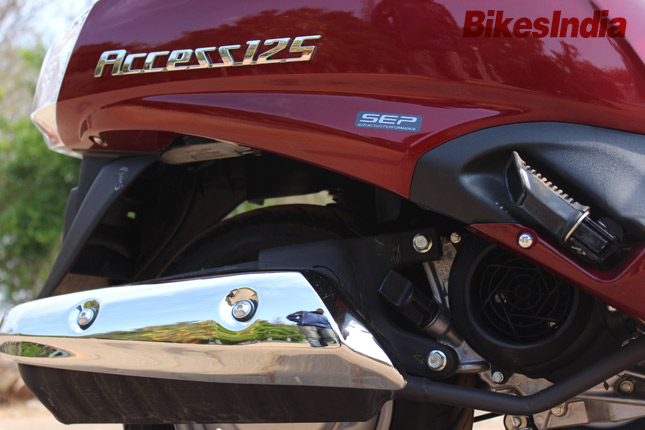 The Honda Activa 125’s engine is always smoother one but now Suzuki has also worked on refinement of the new 125cc engine which is pretty impressive and enjoyable. The stability comes standard with Suzuki Access 125 making it more fun to ride on highways; you can cruise almost all day long at 70-80 Kmph on new Access. 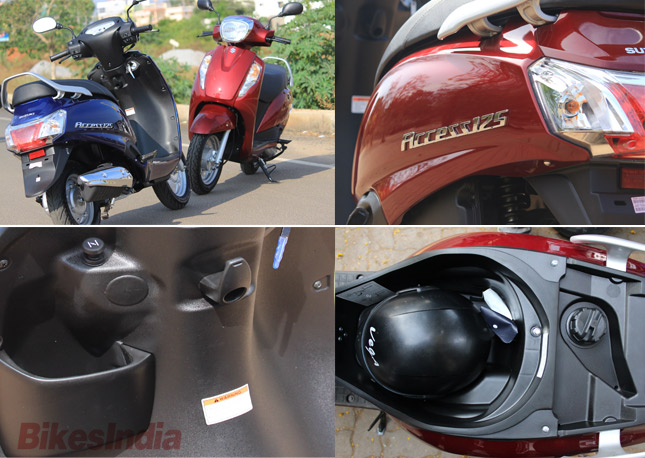 The new Suzuki Access 125 is not only refreshed in terms of looks but also it is loaded with features like best in class under seat storage capacity, longest seat, good mileage, oil change indicator on the digital display board, optional mobile battery charger and small pocket for knick knacks on the front board. All these features without apparently compromising on performance and fuel efficiency the new Suzuki Access 125 comes at approx Seven Grand cheaper than the Honda Activa 125. The Honda Activa 125 is available at price tag of Rs 60637 (Ex-showroom, Delhi) for the deluxe model with front disc brake, on the other hand the new Suzuki Access 125 comes at price tag of Rs 59222 (On-road, Delhi) for the standard drum brake variant. 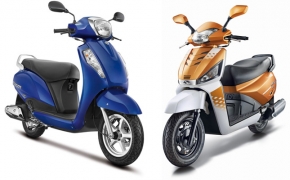 Apr 4, 2016
Reviewing two of the recently launched 125 cc scooters in a single week, we are up with a comparison between the much to be talked scooters of the town. We are as excited as you guys are to compare these two scooters. Testing them individually we consider that we could make noticeably differences between the Japanese giant and the Indian scooter makers. 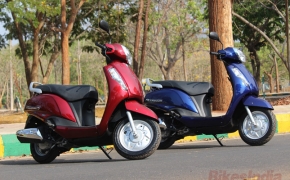 Mar 30, 2016
The very product design work of every competitor makes them stand out of the crowd. So we chose to ride and review the all new Suzuki Access 125 and see how really it does well on our roads. 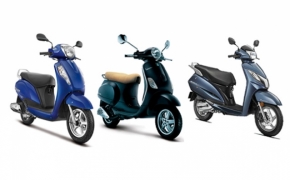 Mar 18, 2016
The comparison game might sound cool speaking about specifications, what is good what is not. But we need to make an important statement that all of the comparison scooters had made entry into the market at the right time. 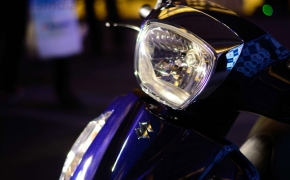 Mar 15, 2016
The all new Suzuki Access 125 REALLY is brand new, almost every bit from chassis to design and engine to improved torque. Suzuki has always brought noticeable difference in every new launch. They surely have understood the like minds of Indian customers. Taking this as an advantage their very new product Access 125 has given the right product by appearance.