Royal Enfield one of the oldest and the most loved manufactures in our nation, is known to produce motorcycles like the classic Bullet. These bikes had more resale value as they started getting old simply because of their cult and hardcore fan following. After decades of limited success with these motorcycles, RE came up with the Thunderbird motorcycle featured with new UCE engine and whole new looks to it. It is still one of the most preferred bikes for cruising in India.

RE wanted to make something new to their supremacy, so they came up with an off-roader motorcycle called the HIMALAYAN. The Himalayan was tested on the mountainous roads of the Himalayas before it was launched. In 2016, the RE lovers witnessed the beginning of the Himalayan era. A motorcycle purely designed to take down the hills, mountains and mostly the normal Indian roads even as a daily commuter. 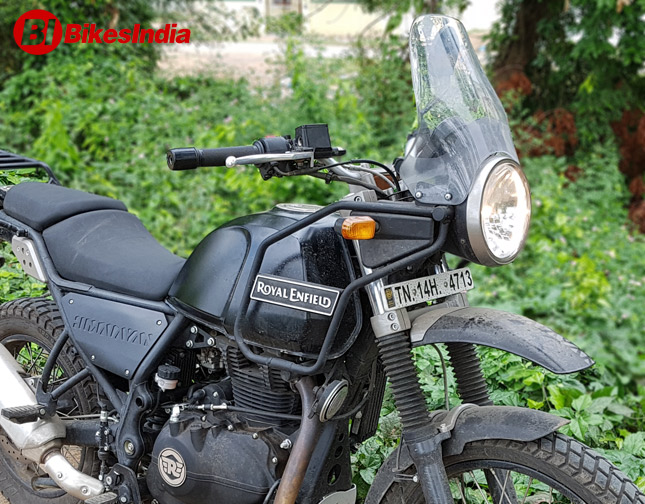 Upfront the Himalayan looks like a pure off-roader with a tall skeleton character. The circular headlamp is continued like all other RE motorcycles. The small windshield is put above the headlamp and a beak that extends out make it look like a bird. The headlamp doesn’t get any LED bulb but provides a fair visibility. The indicators look rugged and bulky. The LED tail lamp looks something similar to what we have seen on its sibling the RE Thunderbird. The upswept exhaust is something different that RE has brought in the Himalayan. The Himalayan sports a 21-inch front wheel and a 17 inch rear wheel that adds up to the bikes adventurous characteristics. 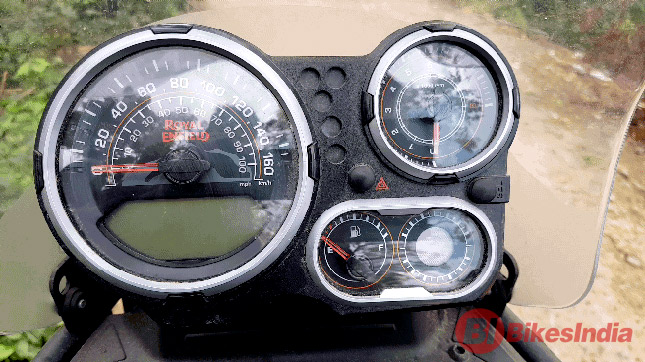 The Instrument console on the whole bags more features when compared to the other RE bikes. The speedometer cluster includes a tachometer, gear indicator, compass, two trip meters, average fuel meter, side stand indicators, hazard lights, neutral position indicator, service interval, a clock, distance in kilometers or miles, tale tell lights, high beam indicator and the battery indicator too. The inclusion of the hazard lights is a very smart move by RE. 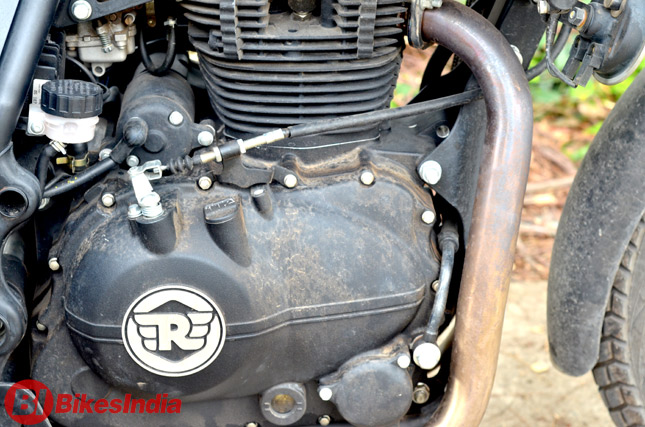 Turn on the engine, you hear a little different exhaust note, not very similar to the regular RE motorcycles. The exhaust sounds pleasing with popping noise (clangs) that it makes often. RE have fitted a new engine called the LS410, LS meaning long stroke and 410 stands to its cubic capacity. The Himalayan is powered by a 411cc, single cylinder, air cooled engine that delivers 24.5 BHP at 6500 RPM and 32Nm of torque at 4000 RPM. The engine has a 78 mm stroke length and 86 mm bore length with 2 valves per cylinder. The mill is mated to a 5-speed constant mesh gearbox.

Fuel is supplied to the engine through a carburetor with a throttle position sensor. The motorcycle has good torque in the lower end range. 0-80 kmph mark was reached easily without any major lags. The windshield also helped in providing ample amount of air resistance. The clutch felt pretty heavy, it was very much noticeable under traffic conditions. It revs a bit easier than the other RE motorcycles.

The gearbox felt a bit notchy at times to click into its position. The best feel of riding the motorcycle is between the 4000-5500 RPM mark after which the vibrations begin to kick in slowly on the handle bars, windshield and foot pegs. The engine isn’t very refined but feels pleasing to ride it under 6000 RPM, after which it just feels like you are over-revving the engine. Keep it under 100 kmph, it rides really well. 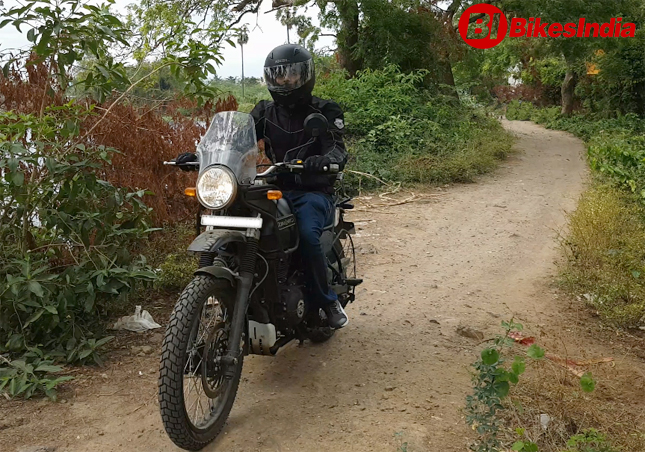 The low rider seat and the upright handlebar provide a neutral riding position. Being 6-foot tall I felt it a bit hard to get off the bike. But the riding position was comfortable. The best part of the Himalayan is the handling it provides, just give the handlebar a light movement and it beautifully flickers under moving traffic conditions without any hassle or heaviness. It weighs 182kgs and had a ground clearance of 220mm, the weight isn’t felt when the motorcycle is ridden, however, under non-moving traffic conditions the weight is felt. The pillion seat feels comfortable even for long distances. The motorcycle's short turning radius helps a lot in making U-turns. 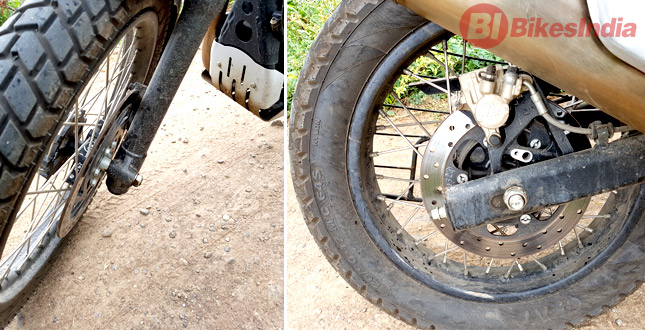 The front wheel gets a 300mm disc and the rear gets a 240mm disc that provides decent stopping power. Some pressure must be applied on the brake lever to get that bite and feedback. The Himalayan lacks ABS, a switchable ABS would have supported city and highway roads. The suspensions are the best part of the Himalayan, the long travel suspension soaks up all the bumps and potholes. Miss a speed breaker? No issues the Himalayan takes care of it. The front end gets a 41mm telescopic fork with 200mm travel. The rear gets a mono shock suspension with 180mm travel, being the first RE to get the mono-shock suspension system.
Pros:

• Lack of kick starter being a carburetor engine.
• Flimsy mirrors and windshield.
• Finishing on the exhaust. 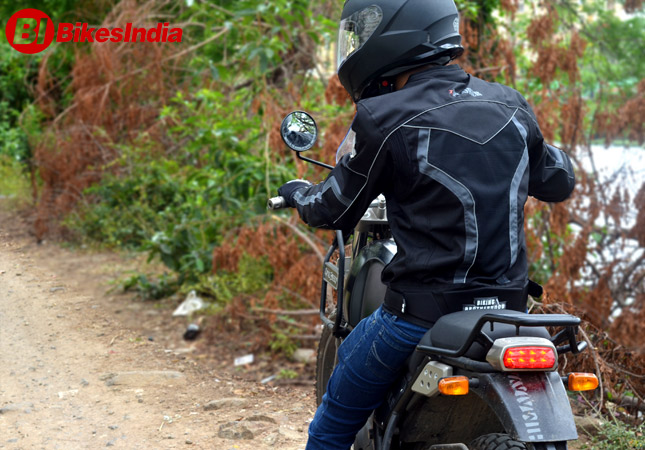 Being RE's first off-roader motorcycle, we must appreciate their efforts in doing this much. Keeping in mind a few niggles and customer complaints, we are hoping that RE will come up with an even better Himalayan in the near future.
Review by- Rishath Suresh
Ride courtesy- Sri Venkateshwara Bike Zone (Palikkaranai, Chennai)
See full details of Royal Enfield Himalayan Sleet »
Tweet 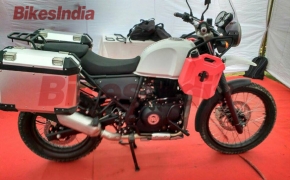