For those who are not much familiar with the very basics of biking, no matter what you got on your bike, a litre class engine, ride by wire technology, all the gizmos and the best electronics the world has to throw at you; your bike is literally nothing without its main chassis and in this case it is the frame of the bike. There are many types of frames, but the one under discussion here is the Trellis Frame. Now the reason to actually talk about it is because nowadays in the world of modern motorcycling, this is by far the most used and the most preferred frame among all others.

What exactly is a Trellis Frame?

Generally if we look at some of the frames in the bikes, you will find them to be in a single block of metal either forged as one piece of else thick bars of metals welded or brazed together to form a single piece capable to hold a lot of weight. After all, the frame is like the skeleton of the bike. The same way a human body has bones, the bike needs a chassis which is the frame. A typical frame has to hold a lot of weight on it like the engine, the bike body, the fuel tank, the electronics, the rider and the pillion.

The problem with most frames is that they themselves happen to be a lot more heavy than and add to that the rest of the bike, it becomes a huge issue keeping the weight of the bike down. For this reason experts came with a solution of a trellis frame. In this the frame is made using aluminum or alloy tubular bars and are joint together in a triangular form using the cantilever method. This divides the load evenly across all ends of the frame and also allows for the frame to be lighter and able to carry a higher capacity of load. 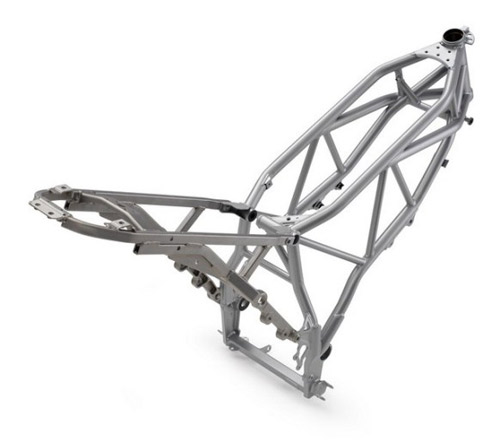 How Is It Better?

Trellis frames are made of a light material; hence the overall weight of the frame itself is pretty light. Add to it the rest of the bike and you can be sure that the entire bike would hardly tip the scale over 130 kilograms. This is the exact reason why KTM and many other companies use Trellis frame on their bikes. This is the exact reason why KTM bikes weight so less. This not only allows the bike to be controlled easily but also gives the bike an unmatched power to weight ratio. This makes the same capacity engine on a heavier frame feel a lot more sluggish while on the lighter frame it feels more powerful and agile. All because of the extra laden dead weight the bike has to carry.

Also the trellis frame allows the bike to be more stable and being the least flexible can handle even a square bar swingarm instead of a single metallic rod type. This helps the bike balance well on the rear monoshocks and also helps keep a proper line in the corners as well.

So if you are looking for a bike which is light and easy to handle and manage, you can simply go for one with a trellis frame and you yourself can see the difference in the power and handling. 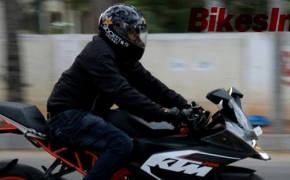 Jan 3, 2015
KTM has fulfilled the heartiest desire of Indian motorbike aficionados by launching faired and track oriented RC200 & RC390. When KTM launched the naked Duke 200 & Duke 390, it was all desired to get these bikes rapped around fairing one fine day and in the month of September 2014 KTM launched these two beautiful sportbikes built around same chassis and engine of Duke duos.