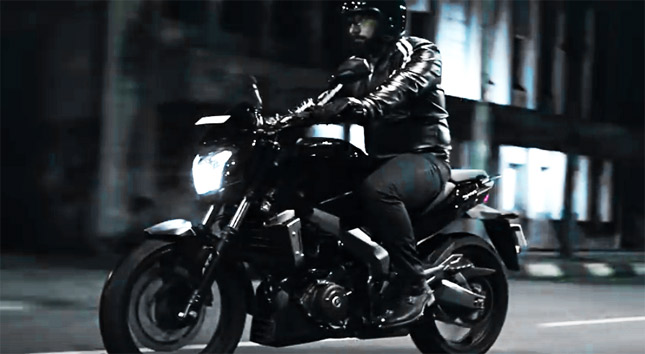 One of the most awaited launches of the year has been made in the form of Bajaj Dominar 400. With the introduction of Dominar, Bajaj has stepped into yet another segment- Power Cruisers. Earlier, when Bajaj had launched Pulsar series of motorcycles in 2001 it was really hard to imagine the success story of a predominantly Scooter manufacturing company. But since the introduction of Pulsar brand till the current Dominar 400 Bajaj has evolved quite a lot, their experience with global giants like Kawasaki and KTM has helped them growing both in terms of quality and technology.

The new Dominar 400 is one of the most advanced pieces of machinery from the house of Bajaj, the brand Dominar is likely to receive same response as Pulsar series did, especially when it is launched at such a lucrative price tag. Let’s find out what’s all the Dominar 400 has to offer us. 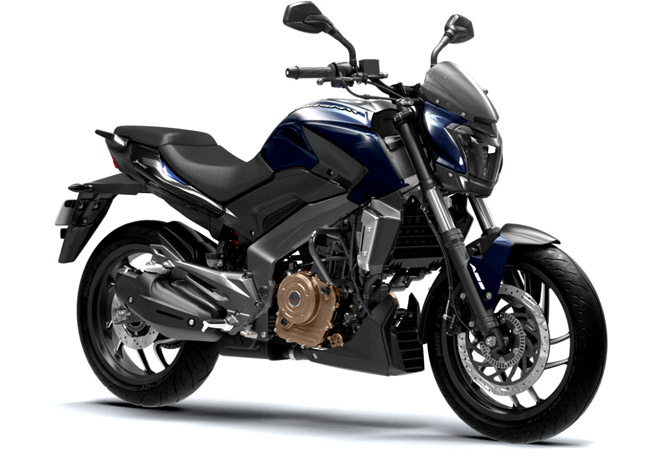 In terms of styling the Dominar is pretty attractive and holds great bit of road presence, the aggressive and DOMINANT styling of the Dominar seems to justify its name. The design team at Bajaj has taken the design cues from the “Lion” like body, the all muscular body of Dominar 400 starts right from the headlight and it follows the same design element till the tail lamp. The significantly large fuel tank serves both practical purpose covering long distances while cruising those long hauls and aesthetic value as well. The split seat is low slung for those comfortable yet confident rides and it appears despite of the heavy weight the bike will be comfortable for all sorts of riders. 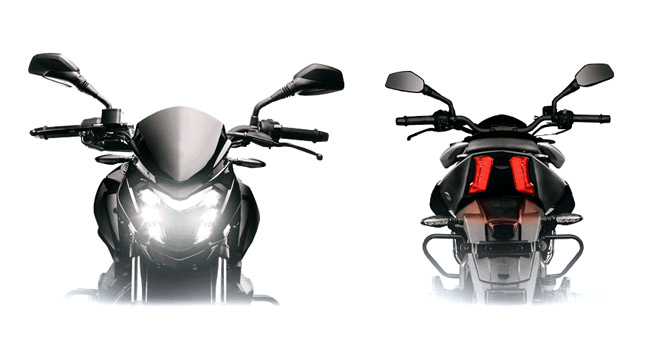 The headlamp assembly of the Dominar 400 is featured with LED, especially developed for emitting balanced white light which according to company can be seen from 1.5 km. The headlight is also featured with Automatic Headlight On (AHO) and the LEDs featuring this is mounted vertically on the headlamp. 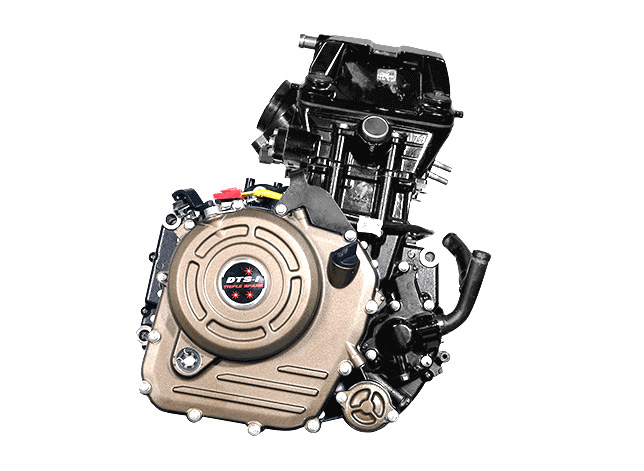 The new Dominar 400 is equipped with the largest capacity engine ever made by Bajaj for their motorcycles. The bike is featured with 373cc liquid cooled single cylinder Dts-I engine, the engine has four (4) Valve setup along with featured Triple Spark Plugs. It is not to mention that the development of this engine has been made on similar conditions with KTM technology as it happened with the Pulsar NS200 engine. You can consider that the engine of the KTM Duke/RC 390 has been taken as platform for basic engine development of Dominar 400’s mill, same as it happened in the case of KTM Duke/RC 200 and Pulsar NS/AS/RS 200.

However, Bajaj has utilized their patented technology in manufacturing of Dominar’s engine like “Triple Sparkplugs” they have also introduced another technological marvel “Slipper Clutch” for better control and efficient use of 6-Speed manual transmission onboard. The 373cc engine of Dominar 400 is tuned to deliver flat torque curve with the performance figure of 35 PS of power at 8000 Rpm and 35 Nm of Torque at 6500 Rpm. The fueling has been done through Electronic Fuel Injection System (EFI) for better fuel efficiency and smooth performance delivery. 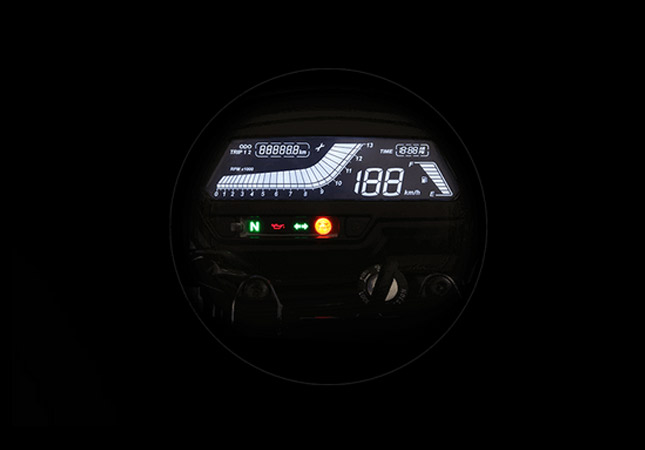 Bajaj has featured two display units on Dominar 400, one out of which is predominantly used for meter console, featuring various vital information like; Odometer, Trip meter, Speedometer etc. On the other hand just to eradicate the chances of getting confused with so much of other related information, the company has given another small display on the fuel tank featuring not so very important information, which the rider normally doesn’t require to access while riding the bike. The LED instrument console featured on the Dominar 400 is designed in reverse order, so that the information can be read legibly even under low lights and during direct sunlight. 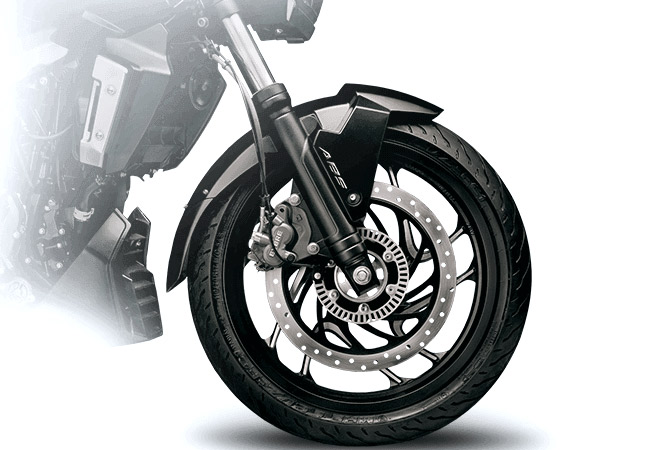 The new Bajaj Dominar 400 is featured with bigger and comparatively low profile tyres for better grip on every kind of roads. The company has allotted Radial tubeless tyres mounted on 17 inch allow wheels. The braking duty is been given to bigger 320mm front disc brakes while 230mm disc does the duty at the rear. The Dominar 400 also comes featured with optional “Dual Channel ABS” for efficient braking.

The bike is equipped with Perimeter frame for better handling along with rigid trellis sub-frame. The swingarm is also made up of stamped metal aiding to the stability and handling of the motorcycle. The bike is suspended on front meaty 43 mm Telescopic suspension and dual spring Monoshock at the rear. 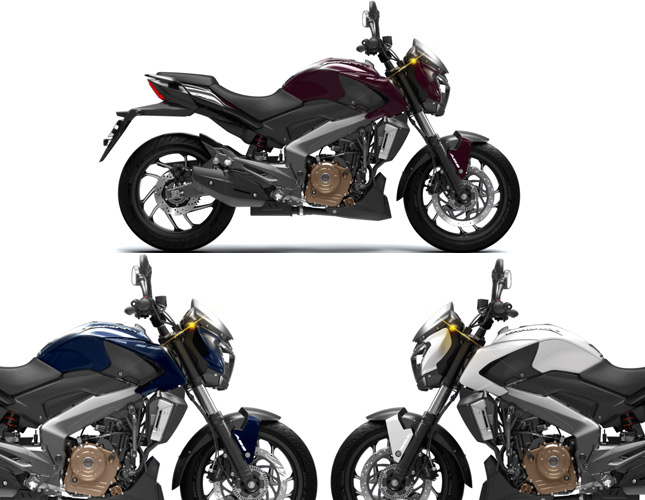 To our surprise the Dominar is not launched in those colors which we have been seeing ever since it was showcased by the company as a concept model- the Red and the Black. But we are sure that the company will soon introduce the Dominar in these two magnificent colors as well. Currently the bike is available in three colors- Twilight Plum, Midnight Blue and Moon White. Dominar 400 comes in two variants- with ABS and without ABS. The base version of the bike is priced at Rs 1.36 lacs, whereas the premium variant with ABS is available at Rs 1.5 lac (Both prices Ex-Showroom, Delhi).