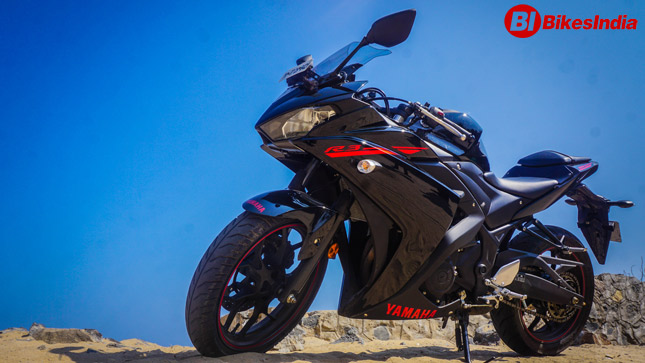 The Yamaha R15 has made history in the premium 150cc segment, similarly Yamaha wanted to kill the leaders in the 300cc segment, so they brought in the R3 into the Indian market. Yamaha was a bit late in bringing in the R3 into our market. The segment was highly dominated by the KTM RC390, but then came in the Dominar 400, even though it is a naked motorcycle, the Indian market have started loving the motorcycle for its killer price tag and dashing looks. But spare me these motorcycles have only one cylinder, so let’s keep them apart.

Coming to the two cylinder 300cc motorcycles we have the Benelli TNT300, Kawasaki Ninja 300 and the Yamaha R3. The Ninja 300 is one of the best looking motorcycles even when it is compared to many superbikes. But then the R3 came into the game offering stunning looks and cheaper service options. Let's see how the R3 performs against its rivals. Is it any better or not? 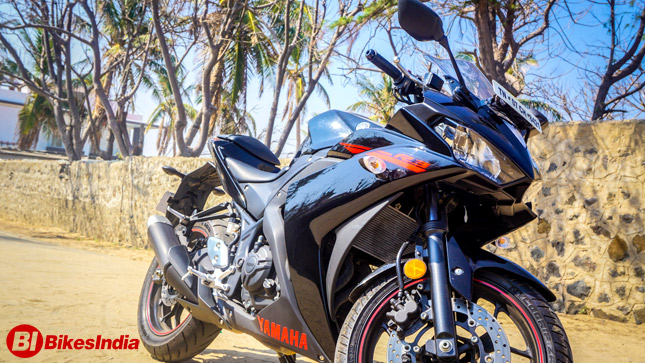 The Yamaha R3 looks fabulous in almost every noticeable angle. It looks neat with a premium fit and finish. The twin headlamps, clip-on handlebars, a pointy tail section make it looks similar to its older siblings. Yamaha has stuck on to using the bulky indicators which we have seen on it’s younger sibling the YZF-R15. It is sad that the pillion seat is too small and doesn’t receive anything to hold on to. Yamaha has retained the short triangular canister shaped exhaust that we have seen on its older sibling the R6. The tank looks tall and beefy with neat sculptures for the knees to lock up.

When you compare the R3 with the R15 v2, the R3’s handlebars feel very high, moreover making it look like it is purely made for the more touring purposes and not much towards the tracks. 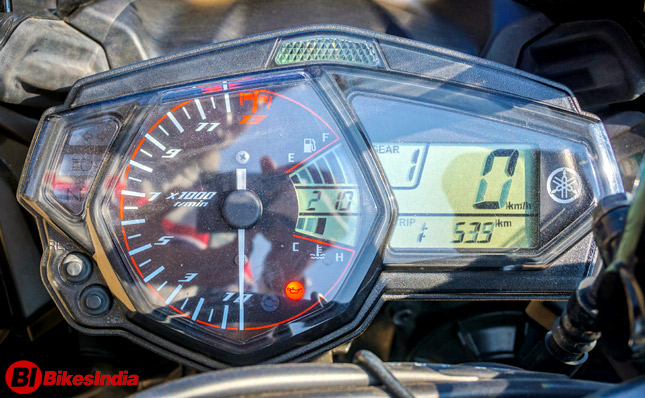 The instrument cluster looks posh and is loaded with a bunch of features such as gear position indicators, a fuel gauge, a water temperature gauge, a real-time and average fuel economy, a clock, two trip meters and an oil change indicator. A white light is placed in-between the digital speedometer and analog tachometer, which acts as shift timing indicator. The switches are soft and feel premium. It is sad that the R3 lacks a hazard light. 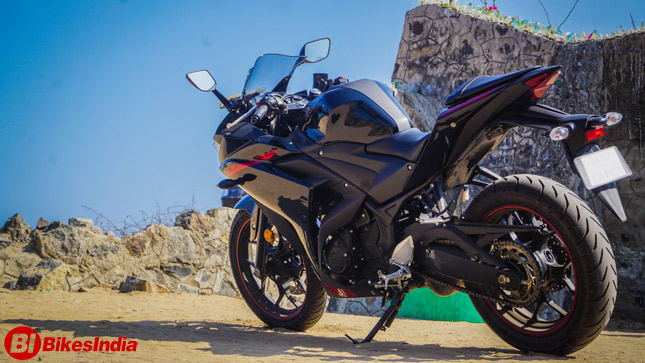 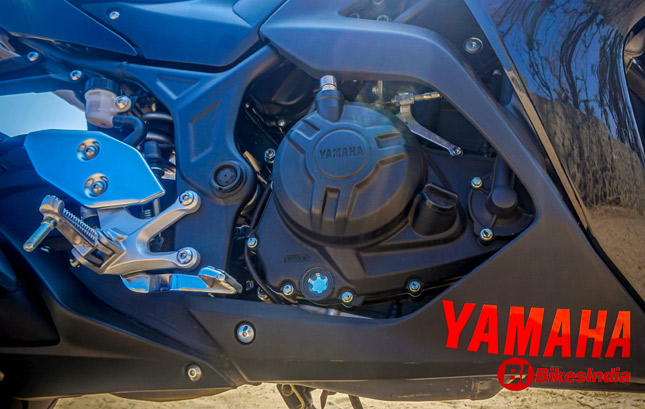 The engine feels really smooth and the heat produced isn’t very noticeable. But something that we noticed is that after the engine reaches a certain engine heat range, the engine needs 4-5 cranks before it starts up, which is a bit annoying if we are stuck in traffic. The R3 lacks the slipper clutch as seen on the RC 390, which is a major drawback. There are very minimal vibrations felt under regular riding conditions, but at certain RPMs few vibes kicked into affect the tank and the handlebars. Riding the R3 in the city is absolutely pleasure; the engine felt buttery smooth, which made it my personal favorite 300cc motorcycle within the city limits. The gearbox felt very sleek and feels very easy to shift with the soft clutch setup. 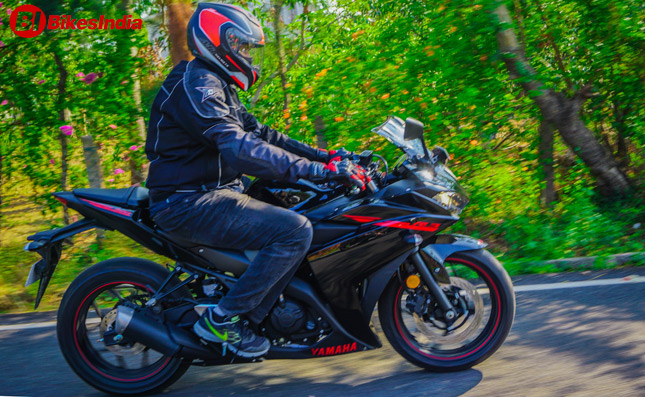 The ergonomics of R3 isn’t as forward biased as we have seen it on the younger sibling R15. The seating posture is not that committed on the YZF R3 hence one can use the bike all day long as well as can also hit the track occasionally. The high raised clip-on handlebars and the rear set foot pegs provide a good seating comfort and just do the job as they are supposed to do. The pillion seat is too small, something within a 10km range can be okay, but it is going to be very tiring for a long ride. It moreover feels like a solo rider motorcycle. The motorcycle has a 14L tank capacity, which could have been increased. 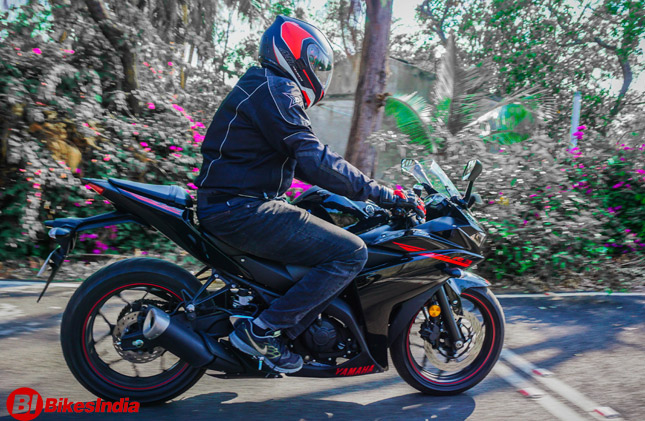 The first thing I would complain is the lack of ABS. The R3 has a 298mm front disc brake coupled to a 2-pot caliper and a 220mm rear disc brake with a single pot caliper. The brakes offer decent stopping power, the inclusion of ABS could have changed the whole scenario since the MRF tires aren’t proving very great on this performance machine. Yamaha has stuck on to the telescopic suspension; the front end receives a 41mm telescopic suspension supplied by KYB. The rear end receives a monoshock suspension. The suspension quality was really good on the R3, absorbing the bumps and potholes with ease not allowing the butt to ache much like on the R15.
Pros-

Lack of ABS.
Lack of Slipper clutch.
More tire options could have been included. 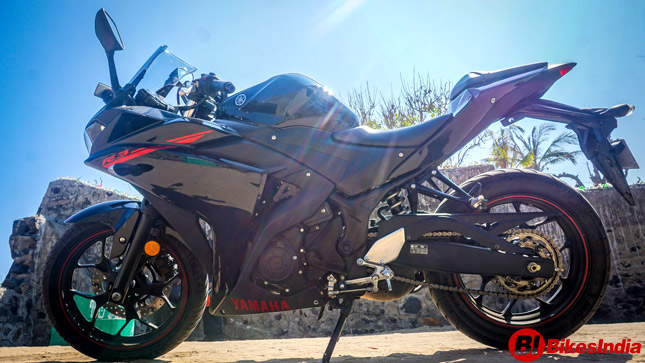 Yamaha hasn’t compromised on the build quality, engine refinement, fit n finish and riding experience. What Yamaha could have included is better tires, Upside down forks, and at least an optional ABS. The R3 is a strong performer, but let’s see whether Yamaha can get rid of the cons in the future model.
Review By: Rishath Suresh
Ride Courtesy: Pratap Roy
Photographs By: Joel Samuel
See full details of Yamaha YZF-R3 »
Tweet